Looking to see your shadow today? Or do you leave that to Punxsutawney Phil, the celebrated groundhog who retreats back to bed for six more weeks of winter if he sees his shadow but promises an early spring if he doesn’t. Shadows have been part of Disney animation almost from the start, for according to master animators and Disney Legends Frank Thomas and Ollie Johnston, “They anchored the figure to the ground. Without some kind of contact with the background, the characters seemed to float around, walking on air, no matter how much weight had been animated into their movements.” Shadows are often overlooked but never on Groundhog’s Day so here are 10 shady ways Disney has used shadows to brighten your February 2 (or any day). 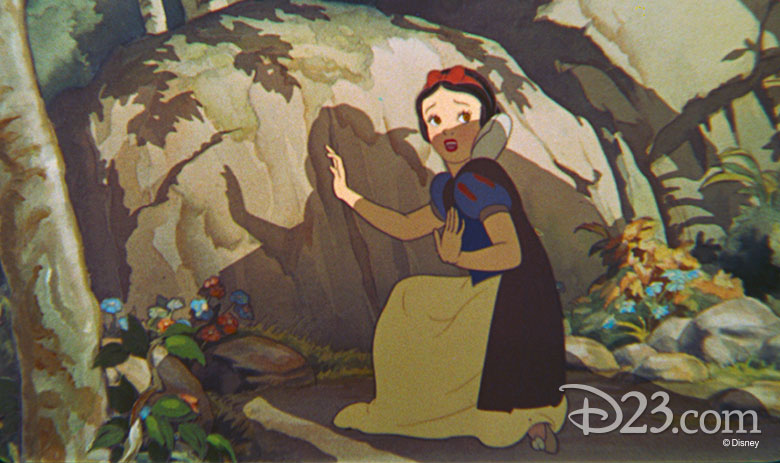 1. Snow White and Several Shadows
Many innovative animation techniques were developed for Walt Disney’s Snow White and the Seven Dwarfs (1937), shadows among them. Walt wanted the cinematic possibilities the creative use of shadows opened to him for his first animated feature, so his layout and special effects experts searched for ways to both create and utilize shadows. Disney Legend Ken Anderson constructed a detailed scale model of the Dwarfs’ cottage, and artists cut out shadow-casting paper figures and placed them within the model house for them to study, especially as light sources were shifted for different effects. A little-remembered device, called the Shadowgraph, was invented (but only briefly used) to simulate realistic shadows of characters on irregularly shaped backgrounds. Most important, after years of using first black and then transparent paint, a more realistic shadow was rendered by double exposing the film of an animated shadow. This allowed the filmmakers to use shadows to powerful effect as in the dramatic scene where the Huntsman attempts to stab Snow White and she sees his menacing shadow looming over her, or when the Evil Queen’s disguise as the Old Hag is first seen only in shadow on the stone walls of her dungeon laboratory’s wall. And when the Old Hag makes her appearance at the window of the Dwarfs’ cottage, it’s the darkness of her sinister shadow that fills the screen and makes her bone-chilling presence known before the visage of this villain supreme is even revealed. Walt and his artists also used shadows to charming effect, as in shadows cast by the Seven Dwarfs on the mountainside as they march home from the diamond mine. 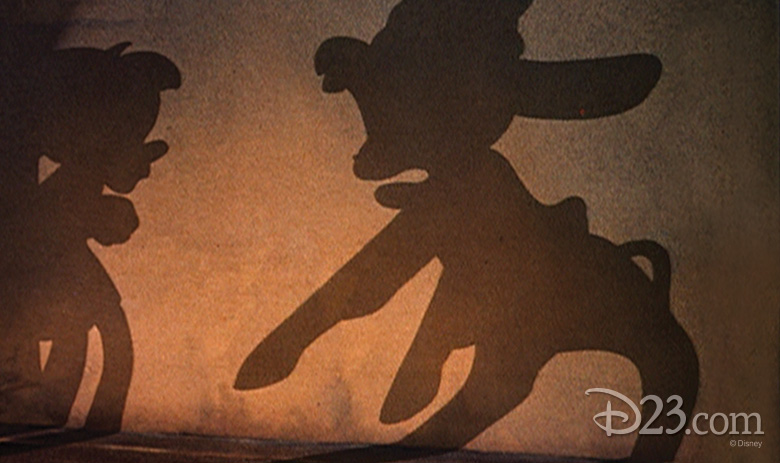 2. Writhing is on the Wall
As with its predecessor, Pinocchio (1940) amps up the scary through the masterful application of shadows. The sinister side of the seemingly carefree world of Pleasure Island is divulged when the innocent puppet’s bad companion, Lampwick, is transformed into a donkey. What at first seems to be a joke is anything but as Pinocchio watches in horror as his naughty playmate turns from boy into braying jackass. The climax of this terrifying transformation, one of the most horrifying scenes in animation or any other medium for that matter, is shown in shadows on the pool hall wall. 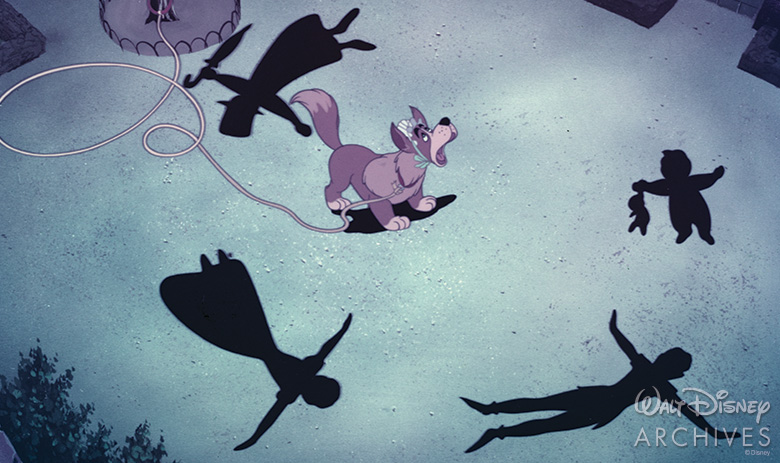 3. A Boy and His Shadow
When Disney animation portrays a shadow as a character in its own right, as with Peter Pan’s shadow, it has a lot of personality. As Walt observed, Peter “is a boy who can do very strange things,” pointing out that “his shadow leads a merry life of its own.” In its antic attempts to elude Peter, who is trying to recapture it by chasing it through the Darling nursery, the shadow stealthily tiptoes away—and zooms across the ceiling. It can even hide with another shadow! So important was this shady character to the fantasy of Peter Pan (1953), that it was the first scene Walt put into production so that the animators established the main characters: Wendy, Tinker Bell, Peter—and not so incidentally—Peter’s shadow. 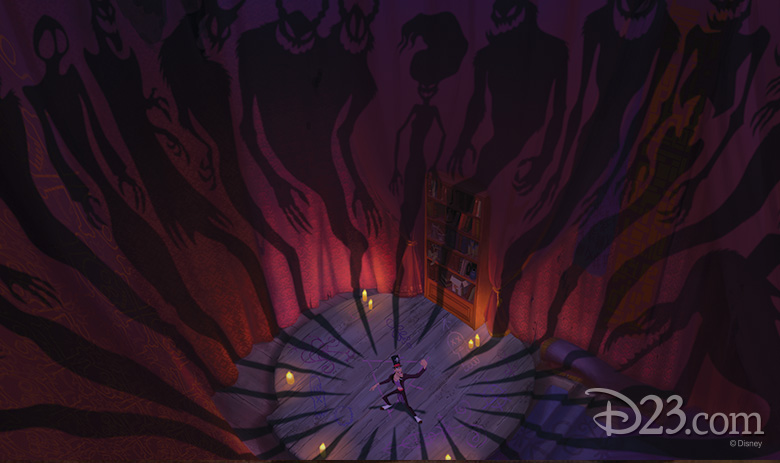 4. Some Shady Characters Celebrated in Song
Many villains have a sidekick, and in the case of Dr. Facilier in The Princess and the Frog (2009), his sinister subordinate is his own lanky shadow. A shadowy figure with mysterious, menacing charm, Dr. Facilier introduces himself—and the dark forces he’s in cahoots with—in the “Friends on the Other Side” number. As the wily witch doctor shows off his graceful moves, his shadow has some moves of its own. The shadow even acts independently of Dr. Facilier, exposing the charming conjuror’s darker side by taking the form of a snake. Later, when the not-so-good doctor must find the wayward frog prince (Prince Naveen in frog form thanks to Dr. Facilier’s deceitful voodoo), his fiendish friends grant him an army of slithering Shadow Demons, designed and animated by Alex Kupershmidt. No wonder that this shady deceiver is known as the “shadow man.” 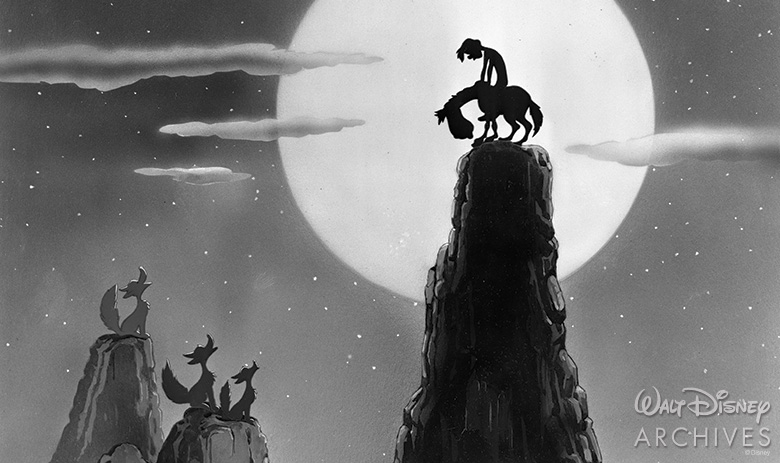 5. Blue Shadows on Pecos Bill’s Trail
Disney animation also achieved visual poetry through shadowy images and nothing was more beauteous than the “Blue Shadows on the Trail” number bookending the wild and wooly tall tale of “Pecos Bill” in Melody Time (1948). Performed with the smooth, Western-infused harmonies of Roy Rogers and the Sons of the Pioneers, the song is accompanied by striking scenes of the nighttime desert where, indeed, “the world is silhouetted against the sky.”  Animated by Disney effects expert Joshua Meador and filmed with the multiplane camera, long shadows are cast by cacti of various shapes and sizes as well as spidery tumbleweeds, all under an ultra-bright full moon. The hauntingly beautiful Western ballad is showcased on the classic Echoes of Disneyland album, as played by Dee Fisher on the electronic organ, available on iTunes. 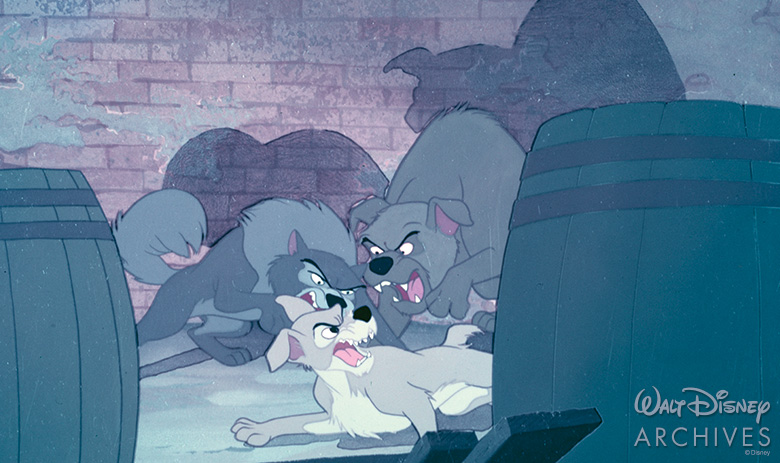 6. Dogfight Seen in the Shadows
The artists behind Lady and the Tramp (1955) sought the most visually compelling way to present Tramp’s fight with some bullying canines to protect Lady in a back alley. Sequence director Gerry Geronimi called for a “real knock-down, drag-out battle,” and when layout artist Tom Codrick noted “we could get a good dramatic effect by having part of the fight behind the barrels,” directing animator Woolie Reitherman suggested that they “have shadows of the dogs cast on the wall.” The effect of the fighting dogs’ shadows seen over wide-eyed Lady packs a punch in one of Walt’s gentlest animated features. 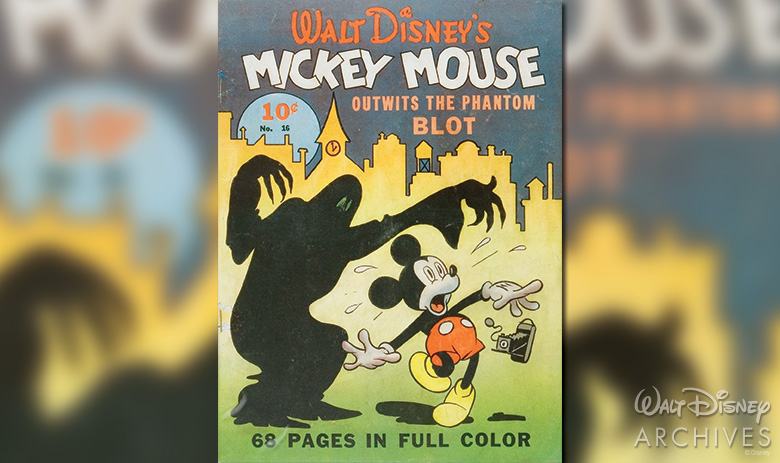 7. The Phantom Blot Shadows Mickey
Shrouded in darkness and with a lot to hide, a shadow could make a truly sinister villain—as evidenced by the Phantom Blot. In 1939, Disney Legend Floyd Gottfredson introduced this shadow-like, night-stalking criminal into the Mickey Mouse newspaper comic strip—the story that was reprinted in the first-ever Mickey comic book, Mickey Mouse Outwits the Phantom Blot (September 1941)—about his non-stop efforts to blot out Mickey. In 1964, the first issue of the Phantom Blot comic book was published, making this shady character one of the first villains to be awarded his own comic-book title. When a somewhat modified version of the Blot appeared in the video game Epic Mickey, this baddie’s shadowy status was solidified when he was called—what else?—the Shadow Blot. 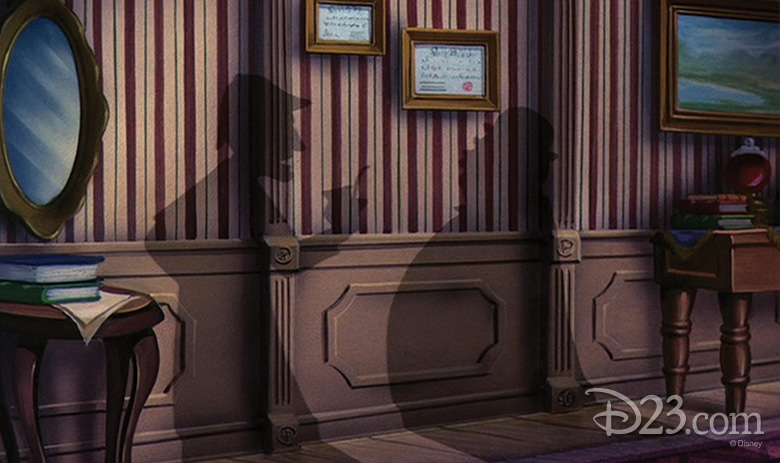 8. It’s a Surprise, Sherlock
Shadows can reveal surprises as intriguing as they are delightful. Case in point: In The Great Mouse Detective (1986) Sherlock Holmes himself makes two cameos, first in silhouette against the window shade of his famed flat at 221-B Baker Street (Basil, the titular mouse detective, has his own flat in the basement of this legendary London building), and then in shadow within the flat itself. Holmes is heard conversing with Dr. Watson (also making a shadowy surprise appearance). To make the shadow even more special, the voice of Holmes is that of Basil Rathbone in a sound byte from a radio show in which the actor performed his signature role as the great Sherlock. 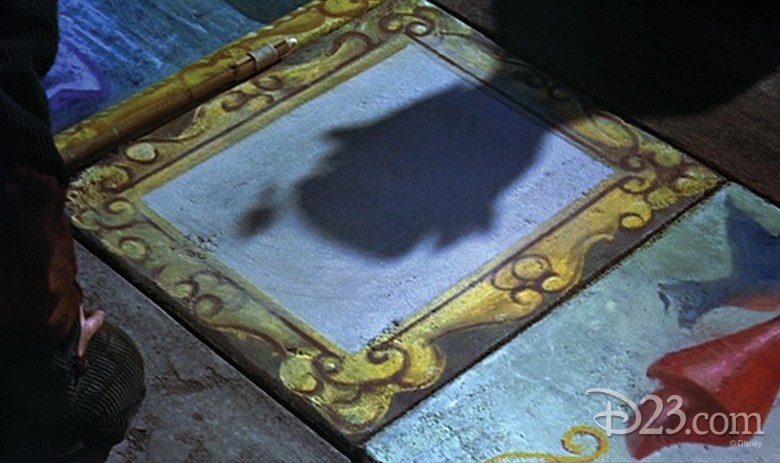 9. A Supercalifragilistic Shadow
“I’d know that silhouette anywhere!” exclaims Bert in Mary Poppins (1964), when an unmistakable shadow falls across the pavement where he is making chalk pavement pictures. He immediately begins sketching a chalk portrait of the practically perfect person. This unique way of showing up is most appropriate, for whether it’s soaring through the air holding her umbrella or sliding up the staircase bannister, Mary Poppins must make an entrance—and when she is reunited with her old friend Bert, the unmistakable shadow of this extraordinarily magical nanny allows her to do just that. 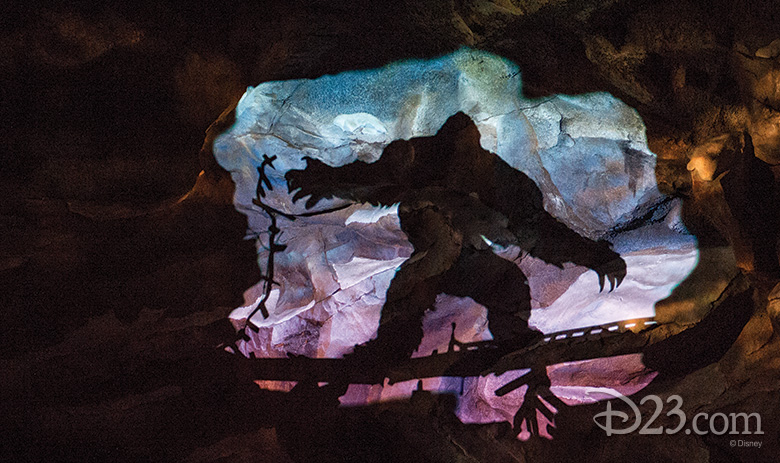 10. Seeing Shadows in Disney Theme Park Attractions
As with animation, shadows are but one tool Imagineers use in the storytelling guests experience in a Disney attraction. From the shadow of the creepy hand crossing the grandfather clock in the Haunted Mansion to the shadow of the Yeti destroying the ride track in Expedition Everest, guests may spot shadows large and small, adding layers of fun and adventure to the already elaborate attractions. In the well-remembered Disneyland® Park Audio-Animatronics® show America Sings, Mrs. Rabbit musically wondered where her “Wanderin’ Boy” was, and the silhouette of an all-too-happy hare hoisting a few outside her window gave the answer. Shadows of sword-fighting buccaneers set up the fact that the pirates have invaded the village in Pirates of the Caribbean. In the queue through Mickey’s Movie Barn, guests can hardly miss Donald and Goofy’s shadows in the projection booth (especially when the Goof playfully forms some hand shadow puppets) in Mickey’s Toontown’s Mickey’s House and Meet Mickey attraction. So keep your eyes peeled the next time you visit a Disney Park—you never know when a shadow might show up to enhance a Disney attraction, even if it isn’t Groundhog’s Day. 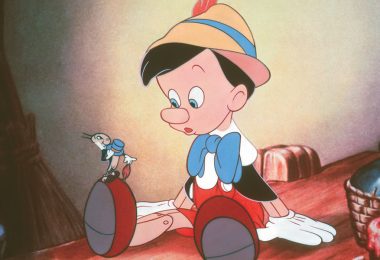 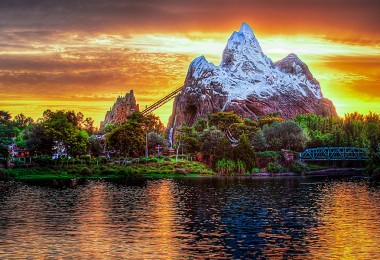 Excavate the Story of Expedition Everest