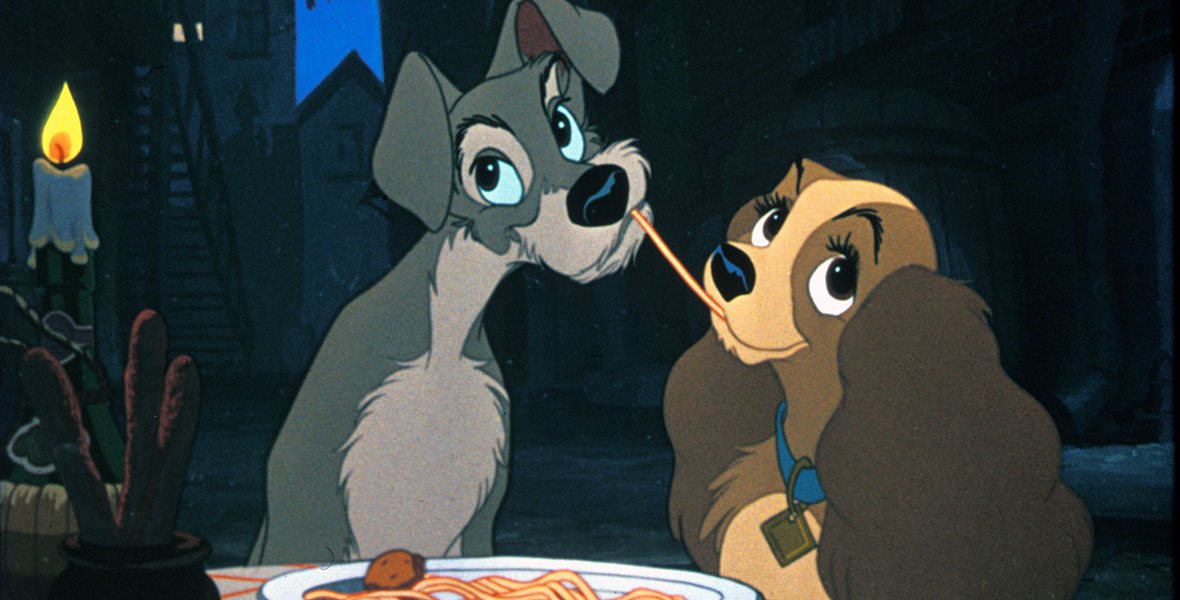 Lady and the Tramp (film) Lady, a young cocker spaniel from a respectable home, falls in love with Tramp, a mutt who lives in the railroad yards. They enjoy several outings together, including a memorable spaghetti dinner by moonlight at Tony’s, but their relationship is strained not only by Lady’s loyalty to her human family and their newborn baby, but by Tramp’s devil-may-care attitude that at one point gets Lady thrown in the dog pound. Tramp redeems himself by saving the baby from a rat and thereby wins Lady’s love and the affection of her human family. The first Disney animated feature filmed in CinemaScope, which necessitated extra work in planning scenes and action to fill the entire screen. World premiere in Chicago on June 16, 1955; general release on June 22, 1955. Directed by Hamilton Luske, Clyde Geronimi, Wilfred Jackson. 76 min. The idea for the film came from a short story by Ward Greene entitled, “Happy Dan, the Whistling Dog.” The film was enlivened by such songs as “He’s a Tramp” and “The Siamese Cat Song, ” by Sonny Burke and Peggy Lee. In early script versions, Tramp was first called Homer, then Rags, then Bozo. A 1940 script introduced the twin Siamese cats eventually known as Si and Am; they were then named Nip and Tuck. The film stars such voice talents as Barbara Luddy as Lady; Larry Roberts as Tramp; and Peggy Lee as Darling, the Siamese cats, and Peg, the show dog. Peggy Lee helped promote the film on the Disney television series, explaining her work with the score and singing a few numbers. Lady and the Tramp was re-released in theaters in 1962, 1971, 1980, and 1986. Released on video in 1987.