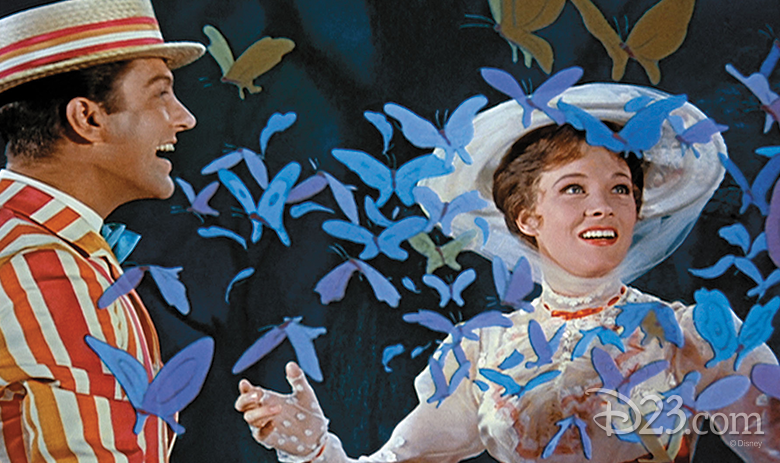 Mary Poppins (film) A magical English nanny, Mary Poppins, arrives at the home of Mr. and Mrs. George Banks, facing the park at No. 17, Cherry Tree Lane in London, to the delight of their young children, Jane and Michael. The proper English father is too preoccupied with his responsibility at the bank; the mother, an ardent suffragette, is not really aware that their two children, left in the care of one nanny after another, are unhappy and unable to communicate with the parents they truly love. Mary Poppins has come to change all this. She settles into the house, and soon has everyone wrapped around her little finger. Mary, along with her friend Bert and a host of chimney sweeps, teaches the children how to have fun, and in so doing makes the Banks household a happier place. By the time she opens her umbrella and flies off on a beautiful spring evening, the family is united together in the park, flying a kite. General release on August 29, 1964. Directed by Robert Stevenson. 139 min. This famed Disney masterwork is indeed “practically perfect” in every way from its cast–Julie Andrews (Mary Poppins), Dick Van Dyke (Bert), David Tomlinson (George Banks), Glynis Johns (Mrs. Banks), Ed Wynn (Uncle Albert), Hermione Baddeley (Ellen), Karen Dotrice (Jane), Matthew Garber (Michael), Elsa Lanchester (Katie Nanna), Arthur Treacher (Constable Jones), Reginald Owen (Admiral Boom), Reta Shaw (Mrs. Brill), Jane Darwell (bird woman)–to its lavish musical score and delightful songs provided by Richard M. Sherman and Robert B. Sherman which includes such favorites as “A Spoonful of Sugar, ” “Feed the Birds, ” “Jolly Holiday, ” “Sister Suffraggette, ” “The Life I Lead, ” “Step in Time, ” “Supercalifragilisticexpialidocious, ” and “Let’s Go Fly a Kite.” The Academy of Motion Picture Arts and Sciences agreed too, giving it 13 nominations from which it won five Oscars for Best Actress (Julie Andrews), Best Song (“Chim Chim Cher-ee”), Best Music Score (the Sherman brothers), Best Film Editing (Cotton Warburton), and Best Special Visual Effects (Peter Ellenshaw, Eustace Lycett, and Hamilton Luske). There was also a special Scientific award to Petro Vlahos, Wadsworth E. Pohl, and Ub Iwerks for the creation and application to use of Color Traveling Matte Composite Cinematography, which helped make possible the combination of live action with animated actors in the film. The special-effects work on Mary Poppins was the most challenging the studio had ever known. Everything from the two-strip sodium process and piano wire to bungee cords were used to create the magical sequences. The work of the special-effects crew, as well as all the production staff, was the culmination of years of Disney innovation. In fact, only Marc Breaux and Dee Dee Wood, the choreographers, and Irwin Kostal, musical arranger, had to be brought in from the outside; Disney staff members could be called upon for all of the other tasks. The entire film was shot on soundstages at the Disney Studio in Burbank. A lavish premiere at Grauman’s Chinese Theater on August 27, 1964, began its fabulous box office run that made it Disney’s most successful feature until then. P. L. Travers, author of the popular books on which the film is based, continued writing new adventures for Mary Poppins long after the film, and in the late 1980s worked with a Disney screenwriter on a film sequel that never materialized. Reissued theatrically in 1973 and 1980; released on video in 1980 and kept available continuously. In 2004 a stage adaptation of Mary Poppins opened in England.