Home / News / D23 Exclusive / Did You Know? 9 Furry Facts from The Fox and the Hound

Celebrate 35 years of being the best of friends with The Fox and the Hound (1981)! Described as “the story of two friends who didn’t know they were supposed to be enemies,” Disney’s twenty-fourth animated feature tells the heartfelt tale of Tod, a mischievous orphaned baby fox who becomes best friends with Copper, a playful puppy being raised under the watchful eye of Chief, the crotchety hunting hound. In honor of the anniversary of this well-loved classic, first released on July 10, 1981, here’s a forestful of foxy facts that have been hounding us for 35 happy years.

In the Tradition of Bambi
The Fox and the Hound was based on a serious novel by Daniel P. Mannix, published in 1967, that involved animals in a primarily natural setting, a story that the Disney artists felt gave them some of the same opportunities—and challenges—as Walt Disney’s Bambi (1942). Co-producer Wolfgang “Woolie” Reitherman, one of Walt Disney’s “Nine Old Men”—and the only member of that elite animation team to stay with the project through its entire production—read the original novel. The story reminded him of a pet fox that one of his sons had raised, inspiring him to develop the feature. 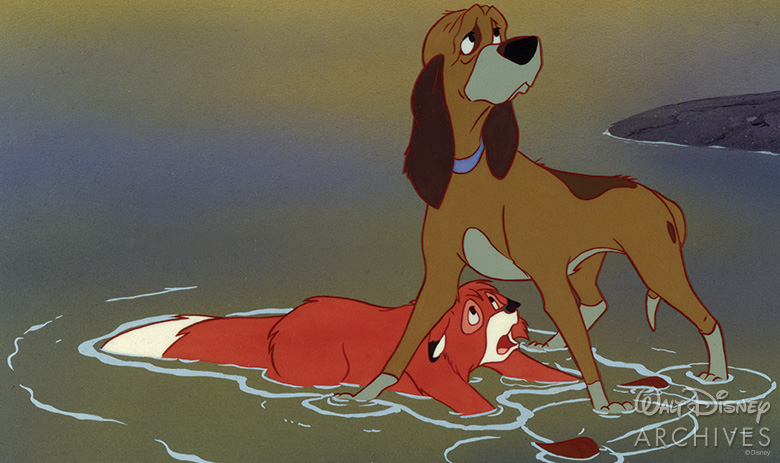 A Timely Subject
Beneath the animal-oriented tale is a compelling story of friends who question an antagonistic stance imposed on them by others. “There were actually a lot of strong thematic elements underneath The Fox and the Hound,” observed supervising animator Ron Clements, “things that had to do with bigotry and with people being sort of stereotyped and forced into certain roles—particularly with the Fox and the Hound, who start out as friends and then find out that according to the rules, they’re supposed to be enemies. They have to deal with that and finally come to terms with that.” The Fox and the Hound, added animator John Musker, “makes a statement about racial prejudice, I think, and trying to overcome that.”

Look Familiar?
Co-director Art Stevens was the live-action model for Amos Slade, acting out the role for the cameras opposite a stuffed toy playing the part of Copper. A longtime assistant to legendary Nine Old Men member John Lounsbery, Art first became a Disney co-director on The Rescuers (1977).

Kurt Russell
Disney Legend Kurt Russell returned to Disney Studios, where he had been its biggest star of the 1970s, to voice adult Copper. Russell was a veteran of Disney films since age 14 when, in 1965, Walt cast him in Follow Me, Boys! (1966), signing the young actor to a long-term contract. The iconic Disney star recorded his role as the titular hound after making his last appearance as scientifically accident-prone college student Dexter Riley for the third time in The Strongest Man in the World (1975). Kurt returned again to Disney to star in such films as Miracle (2004), as United States Olympic hockey coach Herb Brooks, and Sky High (2005), as the world’s most famous superhero.

A Colorful Vocal Cast of Disney Favorites
Character actor Dick Bakalyan, Kurt Russell’s comical-but-crooked nemesis from Disney’s Dexter Riley films, voiced the excitable sparrow Dinky. In fact, The Fox and the Hound vocal cast is dotted with familiar Disney favorites, such as Paul Winchell, the bouncy voice of Tigger in the Winnie the Pooh featurettes, as Dinky’s bird-brained pal, Boomer. Academy Award®-nominated actor Mickey Rooney, who just a few years earlier played Lampy in Pete’s Dragon (1977)—and much earlier had appeared in caricatured animated form alongside Donald Duck in The Autograph Hound (1939)—voiced adult Tod, while Sandy Duncan, Jeanette Nolan, John Fiedler, and Pat Buttram had also all previously appeared in Disney productions. In many ways the heart of the matter, the big-hearted owl named Big Mama was voiced by a newcomer to Disney, Pearl Bailey. The animators studied the multi-talented stage and screen performer as she recorded her vocal characterization. “I tried to incorporate aspects of how an owl moves and combine that with how Pearl Bailey would move and fuse those together,” explained Ron Clements.

Buddy Baker, Music Man
The Fox and the Hound’s memorable musical score was composed by Disney Legend Buddy Baker, who also conducted the 55-piece orchestra heard on the soundtrack. Since joining the studio in 1954 to work on the many new productions Walt was creating for television, Buddy had scored over 50 films. At the same time the prolific music man was composing the Fox and the Hound score, Buddy was also coordinating the musical components of the EPCOT Center project, which opened at Walt Disney World Resort on October 1, 1982. When he retired in 1983, Buddy was the last staff composer at a major Hollywood studio. Incidentally, the film features a song, “Best of Friends,” composed by Stan Fidel and Richard O. Johnston, son of legendary Disney animator Ollie Johnston.

Frank and Ollie’s Last Hurrah
The characters of best friends Tod and Copper were developed by long-time friends and artistic colleagues, Frank Thomas and Ollie Johnston, also members of the “Nine Old Men” team. “This friendship angle found its way into The Fox and the Hound, and it really became the heart of the story,” explained Ollie. “Because we’ve had a long friendship, you can see how the whole idea appealed to us.” After completing their Fox and the Hound animation, Frank and Ollie retired to write their magnum opus, Disney Animation: The Illusion of Life. Widely considered the “bible” of the art of animation, Frank and Ollie’s book was published in 1981, and included analysis and background on every Disney feature right through The Fox and the Hound.

In Classic Style
Producer of every animated feature since the death of Walt Disney, Woolie Reitherman saw his role as keeping Disney animation not only aloft but also soaring to new heights of artistry. “We’ re always trying new methods, new techniques, pioneering one thing or another,” Woolie said in 1981. “The Fox and the Hound is a perfect example. The artwork and styling inspired by [veteran Disney artist] Mel Shaw’s story sketches have been lost from animation over the years. It has depth, mood, and rich color values.” As a testament to his talents and contributions to the film, Disney veteran Mel Shaw received a special credit as “Creative Assistant to the Producer.” In order to authentically animate the realistically portrayed animal characters, the Fox and the Hound animators studied Walt Disney’s award-winning live-action nature films for reference and inspiration.

New Generation
The Fox and the Hound was entrusted to a new team of young Disney artists, a veritable Who’s Who of soon-to-be renowned talents, including, among others, Ron Clements, John Musker, Tim Burton, Glen Keane, Brad Bird, John Lasseter, and Chris Buck. This relatively untried team was faced with creating a Disney animated feature, a particularly challenging assignment since the production was delayed when a group of animators resigned, delaying the release of the film by almost a year. The enormous success of The Fox and the Hound when it finally hit theaters in the summer of 1981 established the new artists as a Disney creative force to be reckoned with.