Get a clue! As you may have deduced, it’s the 30th anniversary of Disney’s The Great Mouse Detective, which was released on July 2, 1986. The intriguing animated action-adventure details the exploits of a Sherlock Holmes-inspired mouse. Tricked out in deerstalker hat and Inverness cape, and brandishing a calabash pipe and magnifying glass, the violin-playing Basil is a super-sleuth mouse living under the famous flat of Mr. Holmes at 221-B Baker Street. Based on the book Basil of Baker Street by Eve Titus, The Great Mouse Detective leads audiences on a wild chase through Victorian London as sharp-witted Basil—accompanied by his loyal sidekick, Dr. David Q. Dawson—unravels the diabolical plot of arch-criminal Professor Ratigan to overthrow Queen Moustoria and appoint himself supreme ruler of all mousedom. To give this fan favorite a proper anniversary celebration worthy of Queen Moustoria herself, here are some fascinatingly fun facts about this delightfully animated detective story. Quick, read on! The game is afoot! 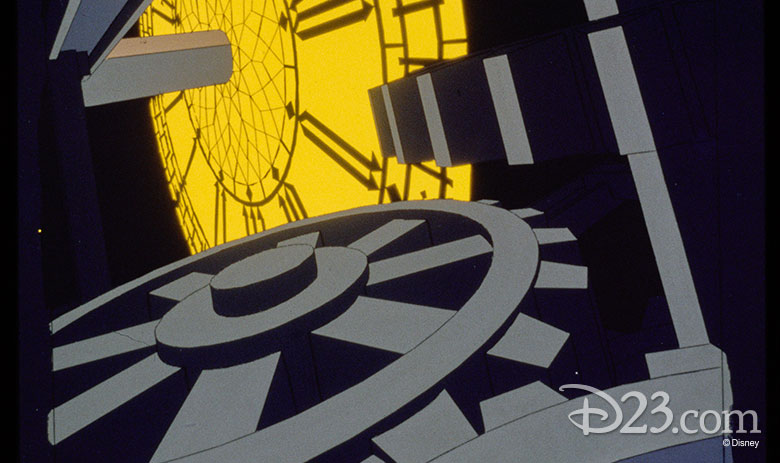 This, Disney’s 26th animated feature, showcased one of the earliest uses of computer animation. For the film’s climax—in which Basil confronts his archenemy Ratigan in a duel set against the clockworks of London’s famed landmark, Big Ben—the filmmakers combined traditional hand-drawn artistry with the latest in technology. During this dynamic two-minute sequence, the animated characters move through 54 moving gears, winches, ratchets, beams, and pulleys created by artists working with computers, aided in part by a field trip to the inner workings of the real clock (undertaken by layout artist Mike Peraza). Animator Phil Nibbelink and Tad A. Gielow, a Disney veteran specializing in computer software utilized for graphic art, spent several months designing the interior of the mammoth clock. “By creating the entire room we were able to do the kind of cinematography that’s not normally possible in animation,” noted Nibbelink. “In the past, we had been limited to simply tracking in or panning left or right on a flat piece of artwork. With the computer, we can rotate around the whole room and do the kind of camera move that best suits the drama of the situation. For the first time, it was possible to approximate helicopter or steady-cam type shots where the camera is floating free in the room and flies over gears, skimming over the teeth as the characters are running for their lives.” The exciting and experimental sequence paved the way for more computer animation, such as the groundbreaking ballroom scene in Beauty and the Beast (1991) and today’s computer-animated films.

Ron and John Team Up

The Great Mouse Detective marked the directorial debut of the legendary John Musker and Ron Clements. The prolific pair, who went on to co-direct such animated blockbusters as The Little Mermaid (1989), Aladdin (1992), and The Princess and the Frog (2009), co-directed this mousey detective yarn along with Disney veteran Dave Michener and Disney Legend Burny Mattinson. Currently, Musker and Clements are directing Moana, due to be released to theaters on November 23, 2016.

The last of Walt Disney’s legendary Nine Old Men to retire, Eric Larson was profoundly involved in the training of many of the animators who created The Great Mouse Detective, including producer and co-director Burny Mattinson, who spent 12 years as an assistant to this Disney Legend. Credited as a consultant, Larson was in charge of Disney’s training program that brought many of today’s greatest animation talents to the top of their profession. “Finding good animators is as difficult as finding good actors,” observed Larson, who retired in 1986 after nearly 53 years with Disney. “An animator has to understand how to act, draw, tell a story, and make music. But most of all, animators have to create characters that the audience feels they know or want to know.” As a lasting tribute, the kindly character of Dr. Dawson was modeled in part on Eric Larson. “There were striking parallels between Larson and the character of Dr. Dawson,” recalled Disney animator Glen Keane. “They’re both kind-spirited and have gentle personalities. We used some of Eric’s mannerisms for the character. Even the way Dawson wears his pants pulled-up over his belly came from Eric.”

The flamboyantly evil Ratigan was voiced by acclaimed actor and longtime movie great Vincent Price. The renowned star of such classic films as Laura (1944) and The Ten Commandments (1956), as well as horror classics like House of Wax (1953) and The Fall of the House of Usher (1960), Price had long hoped to be cast as a voice in a Disney animated feature, explaining that “Disney is a really magical name to me.” The Great Mouse Detective was the fulfillment of that dream and it proved to be an exhilarating experience. “I loved doing the part,” revealed Price, “because they let me in on the secrets of animation. I’ve always been very visually minded and a tremendous fan of animation, so it was a real thrill to see the behind-the-scenes process. At my age, and when you’ve been around this long, what you look for are challenges. Ratigan was a great challenge because I was part of the creative process. The filmmakers showed me hundreds of character drawings and gave me the freedom to expand on that. It was a reciprocal experience. They enjoyed my interpretation, and I thought theirs was brilliant.” Price’s deliciously wicked vocal turn helped Ratigan become one of Disney’s distinctive evildoers, and the animators even incorporated some of the illustrious actor’s gestures and facial expressions into the character. Vincent Price summed up this power-mad mastermind by stating, “Ratigan is the ultimate villain.”

Vincent Price was not the only distinguished vocal performance. Barrie Ingham vocalized the title character. “I found Basil to be surprisingly sensitive,” said the Royal Shakespeare Company actor. “He is terribly egocentric; but in the end, it is his sensitivity that prevents him from being bombastic and overbearing. He has a lot of frenetic energy which made his character quite a challenge.” Mr. Ed star Alan Young, who had voiced Scrooge McDuck in Mickey’s Christmas Carol (1983), an audio role he would continue in Disney’s DuckTales TV series, voiced the eccentric inventor, Hiram Flaversham. Eight-year-old Susanne Pollatschek recorded the voice of little Olivia Flaversham after being chosen over hundreds of other applicants. Co-director Dave Michener described her vocal performance as “totally natural and beguiling. She was the perfect choice for the part.” The gravelly-throated voice of Ratigan’s accomplice, a baddie bat named Fidget, was provided by accomplished voice artist Candy Candido, who had lent his vocals to such Disney classics as Peter Pan (1953) and Sleeping Beauty (1959).

Academy Award®-winning movie composer Henry Mancini, well known for classic movie scores like Touch of Evil (1958), Breakfast at Tiffany’s (1961), Days of Wine and Roses (1962), Victor/Victoria (1982), as well as Disney’s Condorman (1981), composed the musical score for The Great Mouse Detective. This marked Mancini’s debut composing for an animated feature, although his iconic score for The Pink Panther (1963) became the theme for the cartoon character who first appeared in the film’s opening credits. “It’s different working with these little figures up there rather than people,” Mancini said of making music for animation. “Everything goes so fast. The pacing, the story, just zips along.” Mancini’s Great Mouse Detective music incorporates themes for each of the story’s personalities. Basil’s musical signature is heroic, conveyed through instruments like the French horn, while Ratigan’s theme is dominated by such dark-colored instruments as the bassoon. 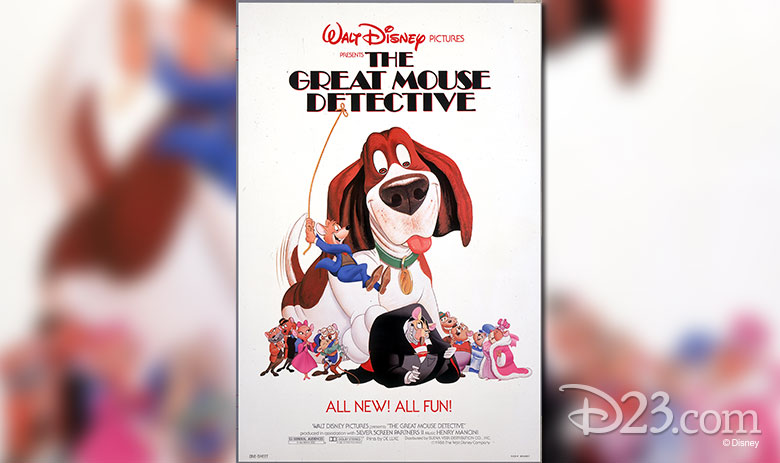 The first animated feature to go into production under the new leadership of Jeffrey Katzenberg, then-chairman of The Walt Disney Studios, and Roy E. Disney, then-vice chairman of The Walt Disney Company, The Great Mouse Detective was green-lit for production with the caveat that the new animated feature be completed in just over a year, even as the team was relocated from the Disney Studios’ Animation Building in Burbank to a nondescript warehouse in Glendale. The Disney animators were being tested, and they knew it. Said Burny Mattinson: “Our people realize there’s something on the line about this film and they have responded to that.” The remarkably short production span was met by the team of 125 artists, creating a camaraderie and can-do spirit among the creative team very much in the classic spirit of Disney animation. “The enthusiasm started from the top,” observed animator Mark Henn, “and went all the way down to the last cel painter. I think the excitement really shows in the picture.” In addition to co-directors Musker and Clements and animators Keane and Henn, The Great Mouse Detective boasts such now-renowned animation talents as Andreas Deja, Rob Minkoff, and Mike Gabriel. The on-time production of this skillfully produced feature, along with its critical and box-office success, proved yet again the viability of Disney animation. The Great Mouse Detective signaled the start of a new period of innovation and creativity, making possible the Disney renaissance, epitomized by such beloved classics as The Little Mermaid, Beauty and the Beast, and The Lion King (1994). 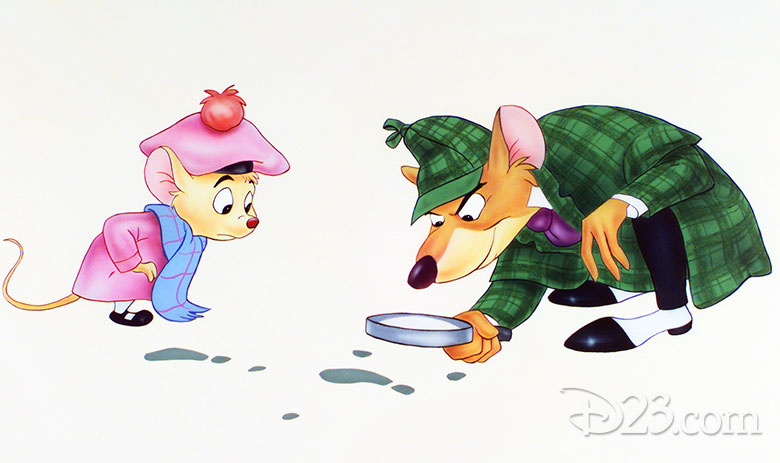 Sherlock Holmes Himself Doesn’t Appear. Or Does He?

It’s elementary, my dear D23 Member: The Great Mouse Detective is rooted in the Sherlock Holmes mythos. Ron Clements, an avid fan of the original Holmes stories written by Sir Arthur Conan Doyle, felt a special affinity for the Basil of Baker Street project. “I thought it would be nice to put something together with Sherlock Holmes and animation,” said Clements. “Part of how I got my job at Disney was I had done a 15-minute animated film on Sherlock Holmes.” When the Basil book came up, he explained, “it seemed like the way to do it because it’s about a mouse and that gives you license to have fun with it.” Holmes himself does makes a cameo appearance in the form of a shadow. The voice heard is that of celebrated Holmes actor, Basil Rathbone, taken from a reading of the Sherlock Holmes story, “The Adventure of the Red-Headed League” recorded in 1966. (Disney fans also know Rathbone as the Wind in the Willows narrator in The Adventures of Ichabod and Mr. Toad, 1949.) Even so, the virtual absence of human characters, including Holmes, was very deliberate. “We wanted to do it totally in this miniature world,” said Clements. “Humans are in this story only as backdrops.” “The Great Mouse Detective is a great example of a story that could only be told with animation,” Roy E. Disney said. “The mice characters live in a miniature world that’s fun to deal with and lends itself readily to animation. It’s a place you could never go as a human.”