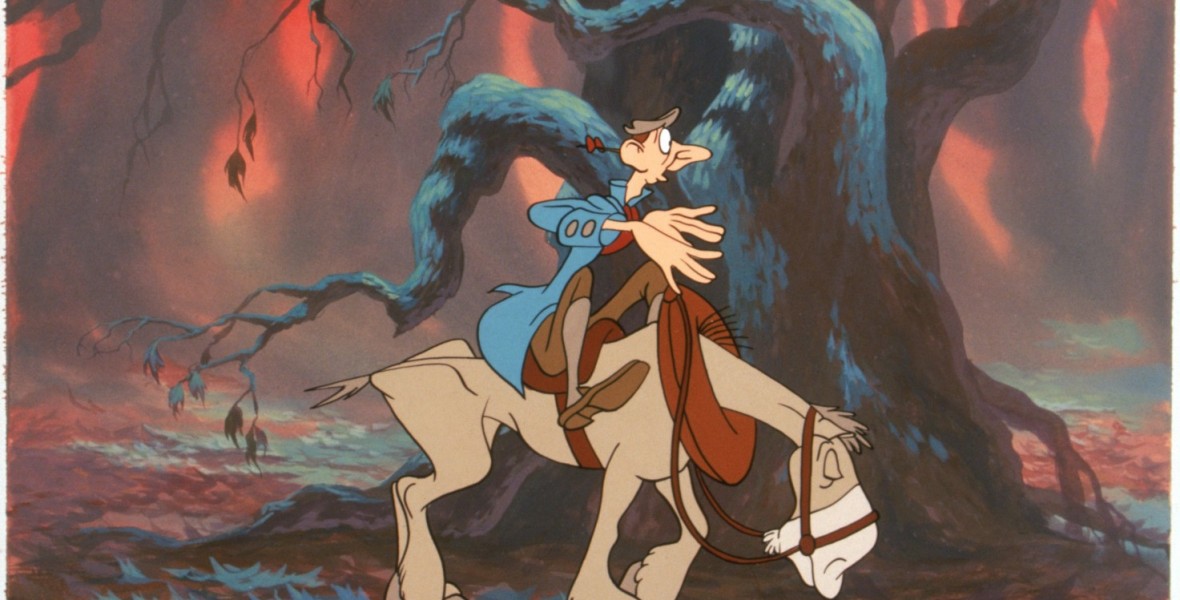 Adventures of Ichabod and Mr. Toad, The (film) The film begins in a library with actor Basil Rathbone telling the tale of The Wind in the Willows (from the book by Kenneth Grahame), about Mr. Toad, Squire of Toad Hall, whose love for transportation vehicles was insatiable.  His friends, Rat, Mole, and MacBadger try to help him when his mania leads to the loss of the deed to Toad Hall and a charge of car theft.  Toad is thrown in jail, but on escaping, he learns Winkie, the tavernkeeper, and the weasels have taken over Toad Hall, and with his friends, Toad redeems his good name by recovering the deed to the estate and promises to reform, until he eyes a 1908 biplane.  Back in the library, singer Bing Crosby picks up with The Legend of Sleepy Hollow (by Washington Irving), in which Ichabod Crane, a new schoolteacher, arrives in Sleepy Hollow and captures every lady’s heart except for Katrina Van Tassel, daughter of a wealthy farmer.  Ichabod has his eye on the Van Tassel wealth, but his attempts to woo Katrina disturb her bold suitor, Brom Bones, who tries to scare Ichabod away with the tale of the Headless Horseman.  As Ichabod rides home that Halloween evening, he encounters the terrifying phantom and is mysteriously missing the next morning.  While the townspeople spread rumors of Ichabod’s whereabouts, Katrina weds Brom.  Released October 5, 1949.  Directed by Jack Kinney, Clyde Geronimi, and James Algar.  68 min.  Voices in the Mr. Toad segment included Eric Blore as Toad, J. Pat O’Malley as Cyril, his horse, and Claud Allister and Collin Campbell as his friends, Rat and Mole. Songs include “Ichabod,” “Katrina,” “The Headless Horseman,” and “The Merrily Song.”  This was the last of the several package pictures of the 1940s, during which the Walt Disney Studio had deep economic problems.  Expenses were lowered by reusing animation cycles from The Old Mill (1937) and by patterning Katrina closely on Grace Martin from The Martins and the Coys.  Henceforth, Walt Disney would be able to finance the production of regular, one-story, animated features, beginning the next year with Cinderella.  Its success ensured the continuation of animation at the Studio.  The entire film of The Adventures of Ichabod and Mr. Toad was not initially released on video cassette, but the two parts were released separately.  The complete feature was released on laserdisc in 1992, and on video in 1999.