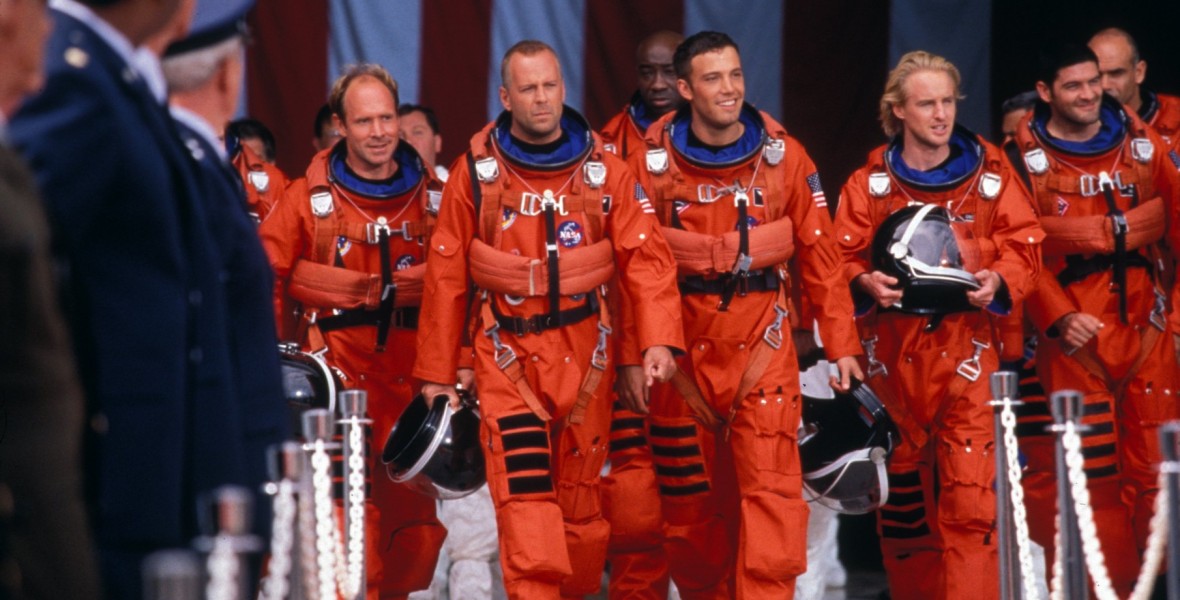 Armageddon (film) An asteroid the size of Texas is heading directly toward Earth at 22,000 mph, with the potential to destroy the planet. NASA’s executive director, Dan Truman, has only one option–to send up a crew to destroy the asteroid. He enlists the help of an unlikely hero, Harry S. Stamper–the world’s foremost deep-core oil driller–and Stamper’s roughneck team of drillers to land on the asteroid, drill 800 feet into its surface, and drop a nuclear device into the core. On this heroic journey, utilizing two space shuttles, Freedom and Independence, they face the most physically and emotionally challenging conditions ever encountered in order to save the world and prevent Armageddon. Directed by Michael Bay. A Touchstone Picture. Released on July 1, 1998, after a June 29 World Premiere screening at the Kennedy Space Center. Stars Bruce Willis (Harry Stamper), Billy Bob Thornton (Dan Truman), Liv Tyler (Grace Stamper), Ben Affleck (A.J. Frost), Will Patton (Chick Chapple), Peter Stormare (Lev Andropov), Keith David (General Kimsey), Owen Wilson (Oscar Choi), William Fichtner (Willie Sharp), Steve Buscemi (Rockhound). Filmed in CinemaScope. 151 min. NASA technical advisors who helped give some scientific accuracy to the project included their former Director of Advanced Programs, Ivan Bekey, and former astronaut, Joseph Allen. In order to experience some of the astronaut training firsthand, Willis and Affleck, along with members of the crew, spent several days at the Johnson Space Center in Texas, where the two actors were the first civilians to be allowed in the lab’s neutral-bouyancy tank, where astronauts train to work in space suits. In order to construct the asteroid set on Stage 2 at the Disney Studios, one of the largest in Hollywood, craftsmen had to excavate up to 30 feet below the stage level, so there would be space for the tall set pieces. Exterior shots utilized vast terrain outside of Kadoka, South Dakota. NASA allowed the company to shoot actual shuttle launches at the Kennedy Space Center in Florida, and to film at the Johnson Space Center and Ellington Air Field in Texas (where they received a surprise visit from former President George H. Bush). Armageddon became Disney’s highest grossing film, until passed by The Sixth Sense. Released on video in 1998.