When you think of Disney, what comes to mind? Well, if you’re anything like us, it’s laughter… heart… and a whole lot of “happily ever after.” But sometimes we forget there can be a spookier side to all things Disney. Halloween is the perfect time of year to remember some of the creepy characters that have faced off against our favorite Disney heroes and heroines… Thankfully, as in any fairy tale worth its weight in delicious candy apples, these vile villains have been thwarted—or shown the error of their ways. (Looking at you, Billy Butcherson!)

From Snow White’s adversary to the re-introduction of a Star Wars villain, D23 has gathered 13 of our favorite spine-tingling characters. Did your fave make our supernatural slate? 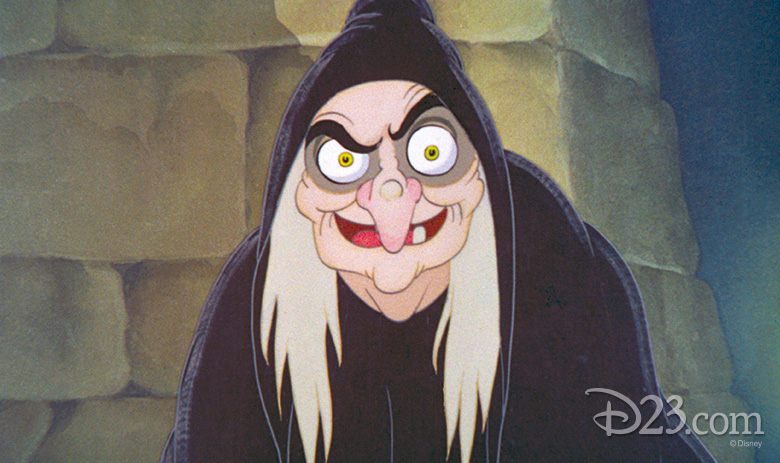 The Hag (aka the Evil Queen) from Snow White and the Seven Dwarfs
A true creepy classic! Disney’s first antagonist in an animated feature, the Evil Queen is dead set on ridding Snow White (her stepdaughter) from the kingdom once and for all. When her huntsman fails in his mission to kill Snow White, the Queen takes matters into her own hands—using dark magic to transform herself into an old hag, in one final effort to do away with her beautiful rival. It’s the Seven Dwarfs who come to Snow White’s rescue, forcing the Queen to fly… and to eventually meet a boulder-fied fate. 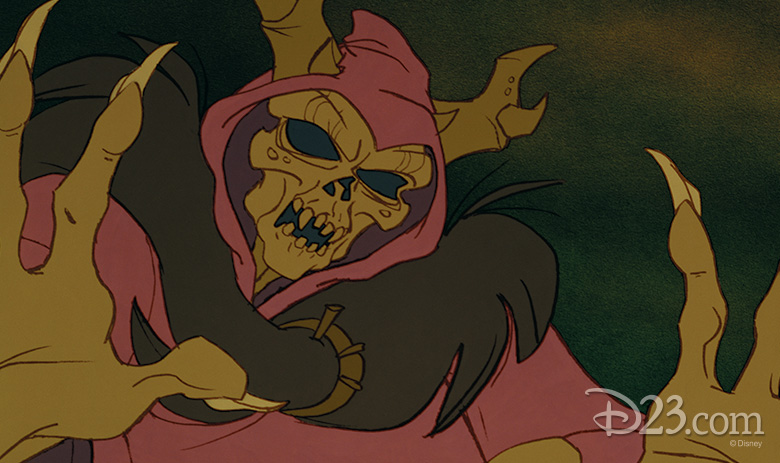 The Horned King from The Black Cauldron
The Black Cauldron, the 1985 animated film based on Lloyd Alexander’s Chronicles of Prydain book series, features one of the creepiest villains in Disney’s canon—the evil Horned King (voiced by John Hurt). A skeletal specimen with fearsome horns and glowing red eyes, the King wants to use the Black Cauldron (which has the power to restore life) to unleash an army of undead warriors. But the cauldron’s magic backfires, eventually consuming the King and making a hero of unlikely warrior Taran (Grant Bardsley). 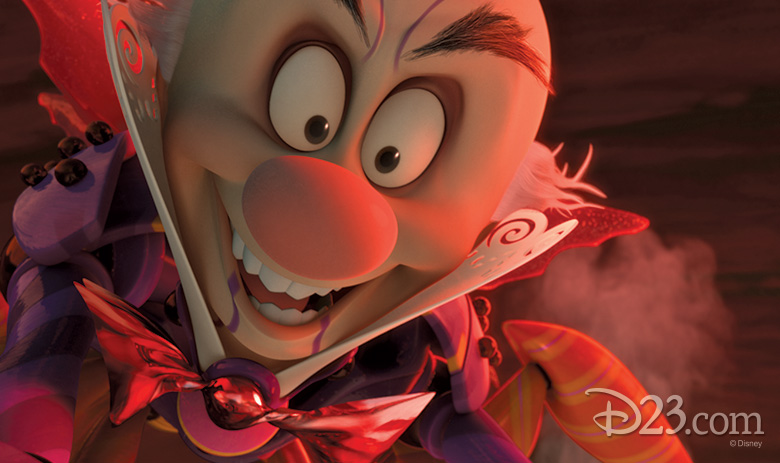 King Candy from Wreck-It Ralph
(SPOILER ALERT: If you haven’t seen Wreck-It Ralph, you may want to jump ahead to our next creepy character)
One of the newer villains in the Disney canon, King Candy (formerly known as Turbo) was up to no good even before the events of 2012’s Wreck-It Ralph unfolded. He’d been a popular character in a classic racing video game—but when a new game stole the spotlight, Turbo was consumed by jealously and disappeared… though not for long. Due to Ralph’s penchant for wrecking things, Turbo reappears and takes over “Sugar Rush,” morphing into the deliciously devilish King Candy and wreaking havoc on the game’s ruler, Vanellope von Schweetz. Can Ralph “fix it” before it’s too late? (Answer: Yes, and how!) 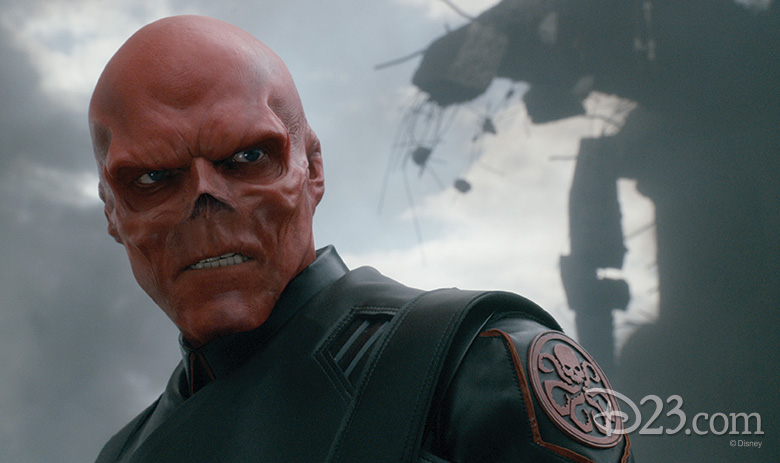 Red Skull from Marvel’s Captain America
Talk about creepy! Red Skull, otherwise known as Johann Schmidt, was Steve Rogers’ nefarious nemesis in 2011’s Captain America: The First Avenger. When we first meet Schmidt (played by Hugo Weaving), he’s the leader of HYDRA, the science branch of the Nazis. (We told you he was creepy.) Though he initially steals the Tesseract (an “infinity stone” of unparalleled power) and plans to bomb the world’s capitals, he’s done in not only by the good Captain’s strength, but also by the fully charged Tesseract itself. 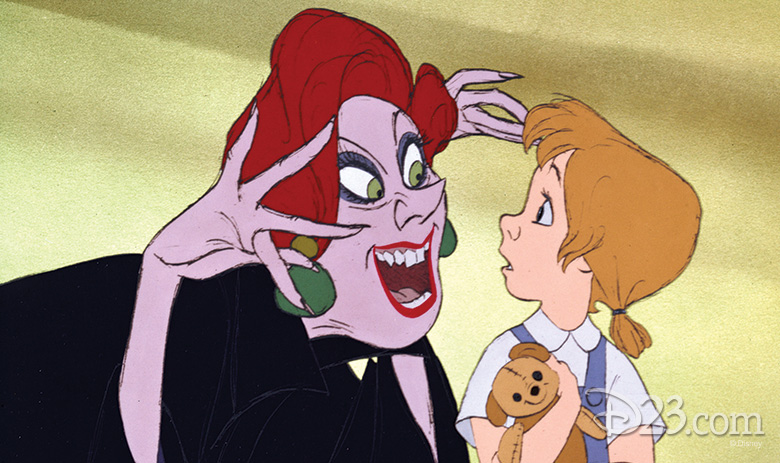 Madame Medusa from The Rescuers
In 1977’s The Rescuers, an orphan named Penny is kidnapped by shifty pawnshop owner Madame Medusa—who intends to use her to find the world’s largest diamond, the Devil’s Eye, inside a pirate cave. Luckily, Miss Bianca and Bernard of the Rescue Aid Society (an international organization of mice with headquarters in the basement of the United Nations building) take on the case… thwarting Medusa and her henchmen; rescuing Penny; and keeping the Devil’s Eye in safe hands. 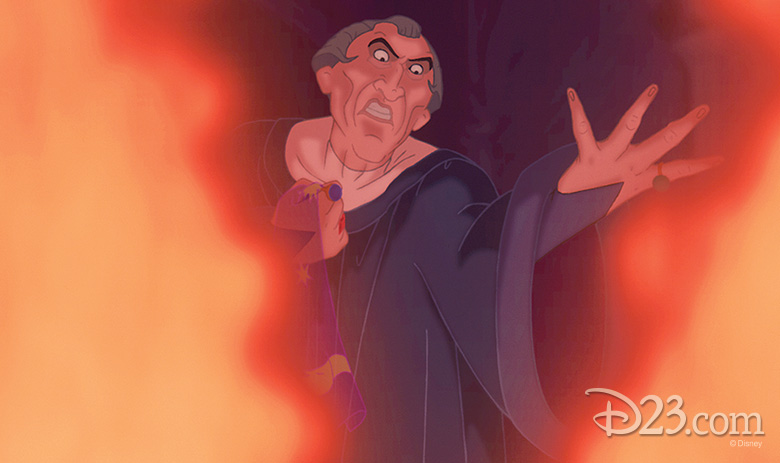 Claude Frollo from The Hunchback of Notre Dame
Widely considered to be one of the darkest and most cunning villains in Disney history, Claude Frollo of 1996’s The Hunchback of Notre Dame is a ruthless Parisian judge who finds himself the reluctant caretaker for the physically deformed, kind-hearted Quasimodo. Defying the orders of his surrogate father, Quasimodo ventures into the streets of medieval Paris where he meets a beautiful gypsy girl named Esmeralda. Naturally, Frollo wants the girl for his very own—but it’s Quasimodo (and his gargoyle friends) to the rescue. 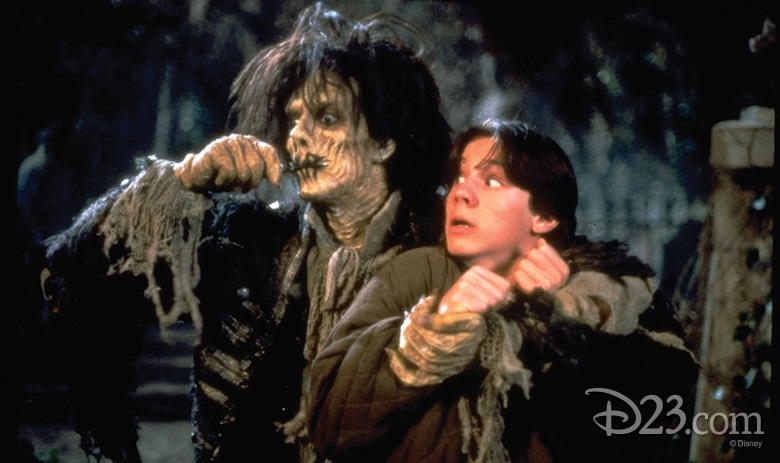 Billy Butcherson from Hocus Pocus
Okay, so not all of the creepy characters on this list are truly bad. Case in point: Billy Butcherson from Disney’s 1993 live-action comedy adventure Hocus Pocus. Back in the 1600s, ol’ Billy was Winifred Sanderson’s boyfriend… but he had a fling with Winnie’s sister Sarah. Next thing you know, he’s as dead as a doornail! Three hundred years later, Winnie resurrects him and orders him to help retrieve her spell book from plucky young Salemites Max, Allison, and Dani—but he winds up helping the kids to defeat the sisters once and for all. 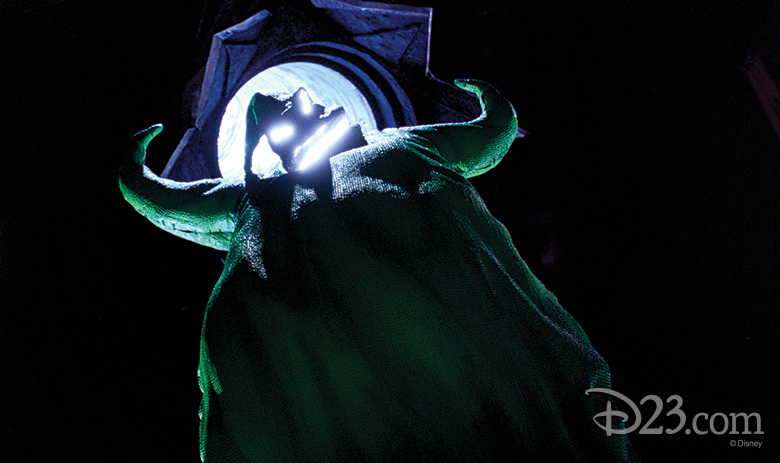 Oogie Boogie from Tim Burton’s The Nightmare Before Christmas
Leave it to Tim Burton to turn what is essentially a sack filled with bugs into one of the creepiest and most entertaining characters that has ever graced the silver screen. Oogie Boogie, Jack Skellington’s nemesis, kidnaps the real Santa Claus (from under Jack’s nose!) and puts poor Sally in danger too. Shenanigans ensue, but Jack does realize the error of his ways… sending Santa back to Christmastown and vanquishing Oogie Boogie forever. 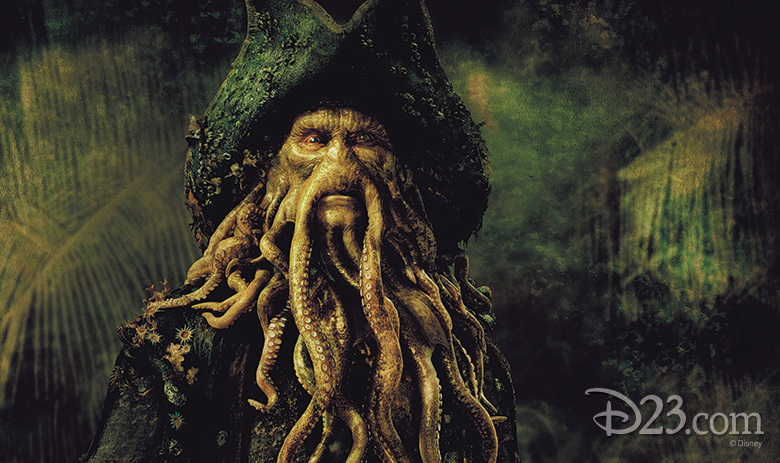 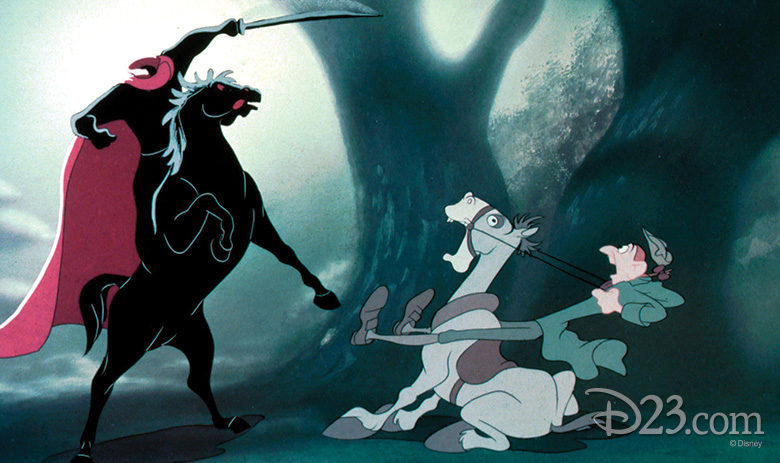 The Headless Horseman in The Adventures of Ichabod and Mr. Toad
The Legend of Sleepy Hollow, one half of the 1949 Disney animated adventure, is based on a 1800s short story by Washington Irving. Ichabod Crane, a new schoolteacher with an eye on marrying rich, arrives in Sleepy Hollow and sets local hearts aflame—well, except for Katrina Van Tassel (daughter of a wealthy farmer), and her suitor Brom Bones… who tries to scare Ichabod away with the tale of the Headless Horseman. On Halloween night, Mr. Crane actually encounters the terrifying phantom—and goes missing! Don’t forget, you can catch the Headless Horseman live and in person during Mickey’s Halloween Party at Disneyland Resort! 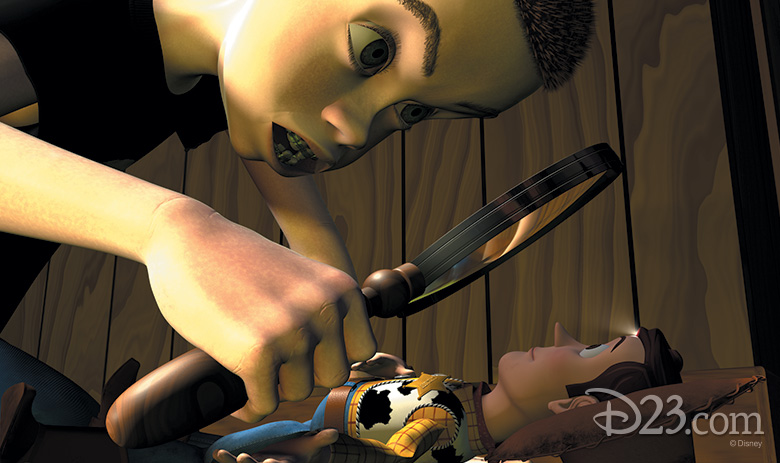 Sid Phillips from Toy Story
You wouldn’t think a kid would wind up on our list of “creepy characters,” but this one’s a real doozy! Sid Phillips first wreaked havoc over Andy and all his beloved toys in 1995’s Toy Story. The vaguely sociopathic youngster becomes the only other human in Andy’s world to realize that the toys are alive—but any worry that Sid would spill the beans is mitigated when Andy and his family move away. (Fun fact: In Toy Story 3, we catch a glimpse of adult Sid, who now works as a garbage man.) 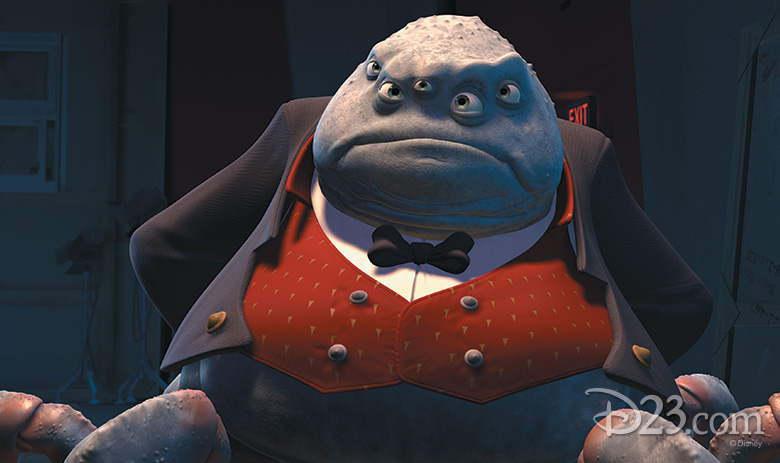 Henry J. Waternoose from Monsters, Inc
Take one look at Waternoose (the CEO of Monsters, Inc.) and you can probably gauge a strong “creep” factor from the jump… what with those five beady eyes and those crab-like legs. Initially, he seems like a gentle, fatherly sort—until he’s faced with keeping his company afloat during an unprecedented energy crisis. But once he commits to weird little Randall’s evil scheme, it’s all over for him… Sully and Mike won’t let anything bad happen to adorable human Boo, and they’ll stop at nothing to protect her! 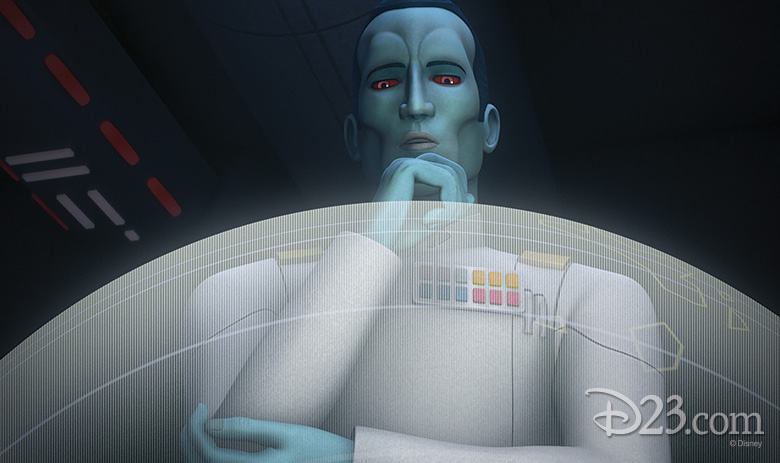 Grand Admiral Thrawn from Star Wars Rebels
Thrawn is a recently re-introduced creepster in the Star Wars canon; while he first appeared in a 1991 Star Wars novel, he wasn’t made an official part of that galaxy far, far away until his introduction in the third season of Star Wars Rebels. He’s a Grand Admiral who serves the Galactic Empire as the Commander of the Seventh Imperial Fleet; cold and analytical, Thrawn allows the Rebels to escape—hoping to manipulate them into orchestrating the complete downfall of their own rebellion. 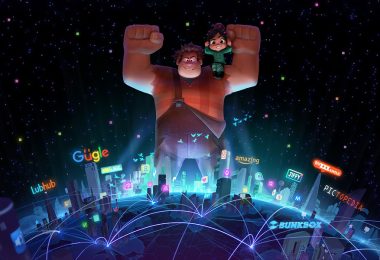 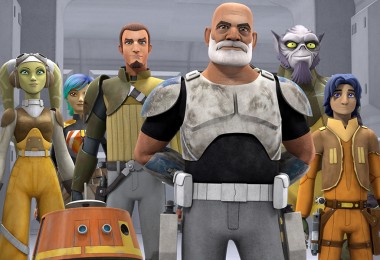