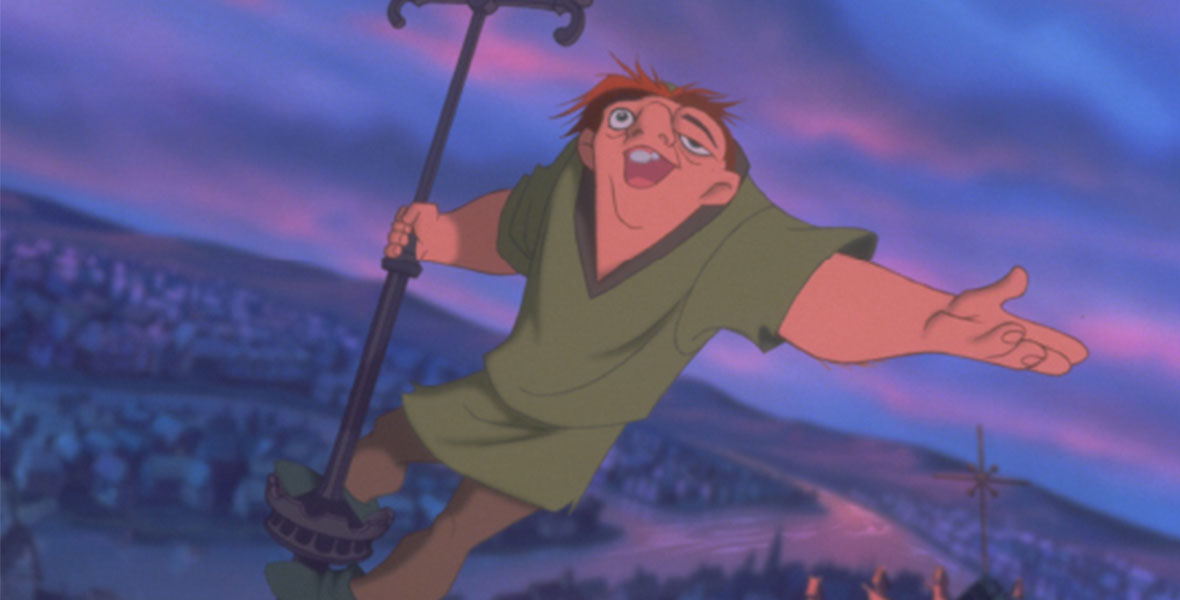 Hunchback of Notre Dame, The (film) The tale of Quasimodo, the lonely outsider who longs to be out in the world beyond his bell tower in the Cathedral of Notre Dame in Paris. Defying the orders of his evil surrogate father, Minister of Justice Frollo, the frightened hunchback journeys into the streets of medieval Paris, where he meets and falls in love with a beautiful gypsy girl named Esmeralda. He also befriends Phoebus, Captain of the King’s guards. Although heartbroken when he discovers Phoebus and Esmeralda’s love for each other, Quasimodo ultimately risks everything to bring them together. Quasimodo’s selfless love overcomes both his heartache and Frollo’s obsessive hatred of Esmeralda. Along the way, Quasimodo finds support and friendship from the cathedral’s trio of comic gargoyles: Victor, Hugo, and Laverne. Directed by Kirk Wise and Gary Trousdale. Released on June 21, 1996. With the voices of Tom Hulce (Quasimodo), Demi Moore (Esmeralda), Kevin Kline (Phoebus), Tony Jay (Frollo), Paul Kandel (Clopin), Charles Kimbrough (Victor), Jason Alexander (Hugo), Mary Wickes (Laverne), David Ogden Stiers (Archdeacon). After the passing of Mary Wickes, Jane Withers completed the role of Laverne. 91 min. From the Victor Hugo epic novel, first published in 1831. Songs by Alan Menken and Stephen Schwartz. The film had a premiere on June 19 at the Superdome in New Orleans, utilizing six enormous screens, and preceded by a parade through the French Quarter. The song “Someday” was sung over the credits by the group All-4-One, but the European version replaced them with the British band Eternal. Released on video in 1997.