Born in Cedartown, Georgia, Disney Legend Sterling Holloway was a bear of very little brain, a snake with hypnotic powers, and a cat who could disappear leaving his smile behind, among the many other Disney characters he voiced. Having appeared on stage by age 5, appearing in silent movies and moving in to sound film and eventually television, Sterling once admitted that he liked doing cartoon voices more than acting because, “There’s a heck of a lot of kid in me yet.” Over a long-spanning relationship with Disney, his voice work included Mr. Stork in Dumbo, the title character in Winnie the Pooh, Kaa in The Jungle Book, the Cheshire Cat in Alice in Wonderland to name just a few. Sterling once admitted that the hardest voice for him was Roquefort in The Aristocats, “because it’s awfully hard to do a mouse and not sound like Mickey.” 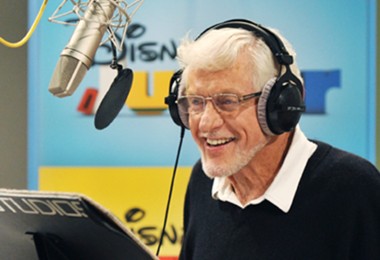