Home / News / Just For Fun / Test Your Knowledge of the Force with this Star Wars ...

The Force is strong in our quiz—test your own knowledge, then share with a friend or co-pilot. Make sure to scroll down for the answers, and to see whether you’re worthy of The Force.

2. Other than Han Solo, which main characters have been frozen in carbonite?
A) Anakin Skywalker
B) Obi-Wan Kenobi
C) Ahsoka Tano
D) All of the above

4. What are the names of the three creatures that Obi-Wan, Anakin, and Padmé face in the Geonosian execution area?
A) Eopie, Fathier, and Varactyl
B) Acklay, Nexu, and Reek
C) Vulptex, Loth-Wolf, and Purrgil
D) Porg, Puffer Pig, and Blurrg

6. Which Empire officer did Darth Vader blame for giving away the element of surprise for the attack on Hoth?
A) Captain Piett
B) Director Krennic
C) Admiral Ozzel
D) Agent Kallus

8. Which character inspired the outfit worn by Galen Erso at the beginning of Rogue One: A Star Wars Story?
A) Obi-Wan Kenobi
B) Luke Skywalker
C) Anakin Skywalker
D) Han Solo

10. Which costume in A New Hope had no copies?
A) Darth Vader’s
B) Han Solo’s
C) Chewbacca’s
D) Greedo’s

1. C, Hera Syndulla
The B-Wing was created by master engineer Quarrie on Shantipole, which had a reputation as a one-way trip planet for even the most experienced pilots. It’s a good thing that Hera is no ordinary pilot then, isn’t it?

2. D, All of the above
Obi-Wan and Anakin froze themselves to rescue Jedi Master Even Piell from the Separatist prison known as the Citadel. Though she was told not to join them, Ahsoka smuggled herself along anyway.

4. B, Acklay, Nexu, and Reek
Obi-Wan faced the Acklay, Anakin faced the Reek, and Padmé faced the Nexu. The Reek was used for a short time as a mount to help take down the army of droids.

5. D, Venice
Design Supervisor James Clyne and Production Designer Neil Lamont presented Corellia as an industrial version of Venice, made up of archipelagos and connected by bridges. Most of the Corellia environments were created at Fawley Power Station in the south of England.

6. C, Admiral Ozzel
At first Admiral Ozzel doesn’t believe that the Rebels are on Hoth at all, but once Vader orders that they attack the planet, Ozzel brings his ship out of light speed too close to the planet. Vader gives him a permanent “demotion” and hands over control of the ship to Captain Piett.

7. A, L3-37
L3-37 was built from former astromech and protocol parts. She is very vocal in her belief for droid rights.

8. B, Luke Skywalker
The costumers of Rogue One wanted a connection to the original trilogy, so they took the design of Luke Skywalker’s farm boy costume and made it darker.

9. C, Kylo Ren
The chrome armor was originally planned to be Kylo Ren’s, but J.J. Abrams said, “I want him totally different. He’s not leading the Stormtroopers dressed as one of them!” Kathleen Kennedy loved the design though, so Abrams created Phasma specifically to wear the armor.

10. A, Darth Vader’s
Only one copy of Darth Vader’s costume and helmet was created for the film, so the crew had to be very careful with it. Colin Wilson, a wardrobe assistant, said “If you dropped [the helmet] or something, you could take your pay cards and walk right out the door.”

0-3/10
So, you’ve only just begun your training—don’t worry! These are your first steps. There is plenty of time for you to binge-watch all of the Star Wars franchise films and shows (as well as take this quiz a few more times).

4-6/10
You may not quite be a master yet, but you show great promise. The Resistance could use your enthusiasm. If you keep honing your skills and practicing your lightsaber swipes, someday you will be a Master Quiztaker.

7-8/10
You’re still a Padawan, but you’re on your way to greatness! Keep up your studies, and soon you will be able to bring balance to the Force.

9/10
It’s clear that you have almost completed your training as a Star Wars master. One or two questions more, and you might be able to help lead the Resistance to victory over the First Order. Go back and watch one or two more of the movies, and you should be good to go!

10/10
The Force is strong with you! Clearly you’ve been studying Star Wars trivia all your life—maybe even re-watching all of the movies and animated series while you eagerly await Solo: A Star Wars Story? We applaud your abilities; now go and share what you have learned with younglings across the galaxy! 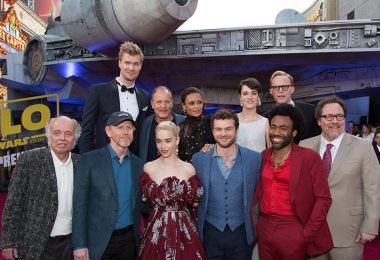