Tomorrowland. A favorite of Disney fans around the world. And Shanghai Disneyland delivers. On our second night we ventured into the sleekly designed two-story land that transports you to a gleaming, optimistic future. One of the awesome (in every sense of the word) aspects of Shanghai Disneyland is its sheer size. That expanse gives Tomorrowland the sense that it could go to infinity and beyond—helped by the fact that Buzz Lightyear Planet Rescue is one of the land’s attractions. 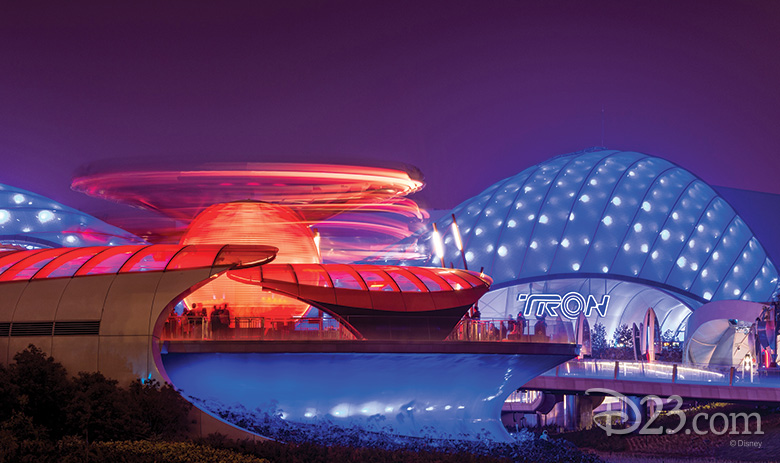 The E-ticket experience we couldn’t wait to sample was TRON Lightcycle Power Run. After having been mesmerized at brilliant images of this attraction, we couldn’t wait for our own Lightcycle race to begin. Mind-blowing doesn’t begin to describe the exhilaration from launch to landing. Even boarding the uniquely designed cycles was a thrill—instantly immersing guests into the TRON universe. The lightning-fast start launches riders up near the attraction’s beautiful glowing canopy, which offers a dramatic view of Tomorrowland. Then it’s on to the grid for the ride of your life. We never wanted it to end, and we might even have taken another spin—or two—just to totally appreciate this one-of-a-kind experience! We’d be remiss if we didn’t note the extraordinary detail in the queue. As guests enter the massive structure, they pass the laser used to digitize Flynn onto the TRON grid in the original 1982 film. And inside we literally stopped in our tracks when an opaque wall suddenly turned transparent, revealing the racing cycles that awaited us. The detail is unbelievable. 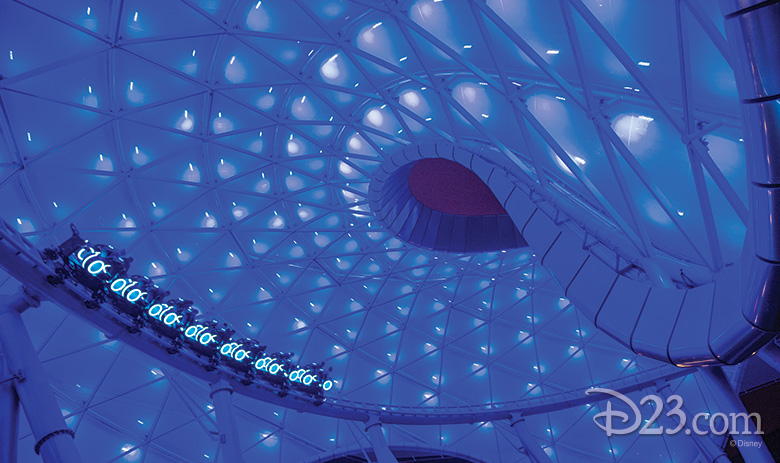 We also happen to be big fans of Big Hero 6, so we stopped by the Pepsi E-Stage to take in the Baymax Super Exercise Expo. We couldn’t help but smile as Baymax and Hiro showed some younger Disney fans a few new ways to get their heart rates up (as if the Power Run wasn’t enough!).

The next morning we were honored to be invited to the Grand Opening Dedication Ceremony, which took place in front of the Enchanted Storybook Castle. Disney Chairman and CEO Bob Iger was joined by Wang Yang, CPC Politburo Member and State Council Vice Premier, and Han Zheng, CPC Politburo Member and Party Secretary of Shanghai, to officially open this spectacular destination. Iger read the park’s dedication, inspired by the words originally recited by Walt Disney at the opening of Disneyland, and the event was capped with song, fanfare, and appearances by dozens of cast members and beloved Disney characters. For more on the Grand Opening Dedication Ceremony, click here. 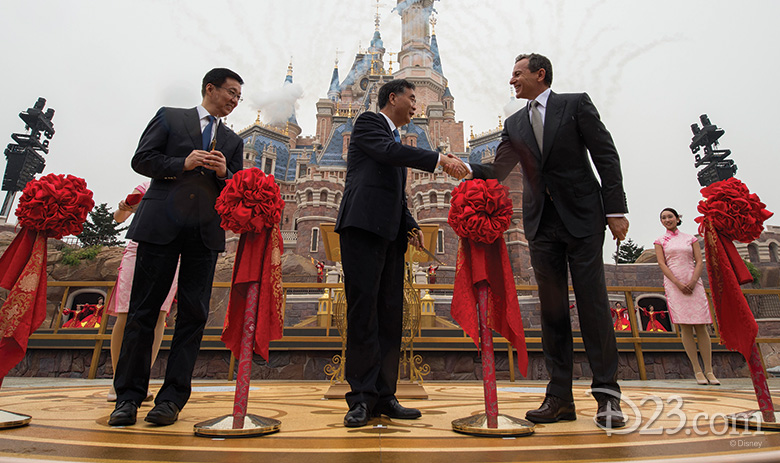 Then it was a dash to the edge of Mickey Avenue to see the first official park guests enter. Everywhere there were smiles, cheers, and even chills—and to see the unbridled excitement and enthusiasm on the faces of visitors was unbelievable. Many guests came decked out in their “Disney best,” and we even ran into D23 Members from China, Japan, and the States! Each smile was bigger than the next. 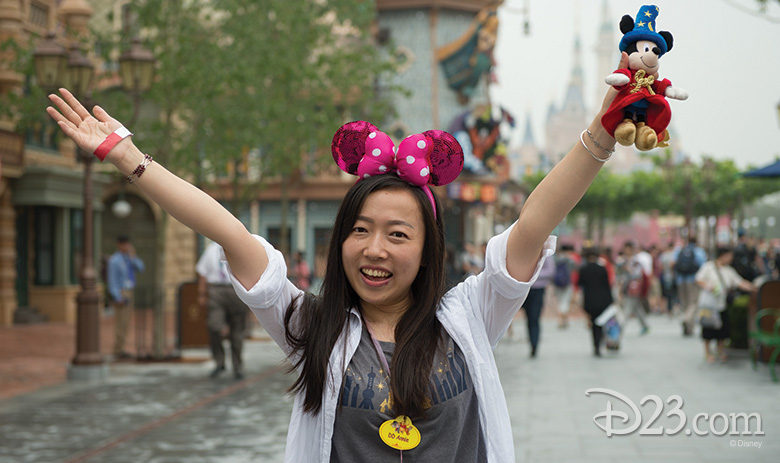 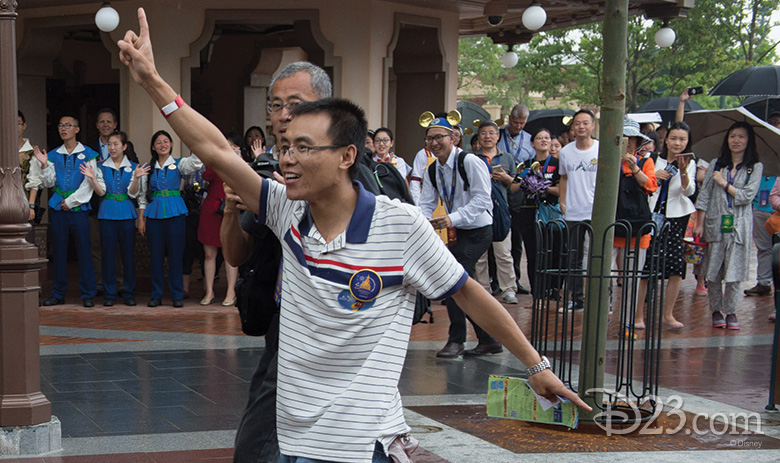 The first guest to enter Shanghai Disneyland on opening day.
We spent almost the entire day just walking through the park once more to watch these Disney fans—young and young-at-heart—experience the imagination, innovation, and detail that Disney has brought to life. (And we may have wanted to ride Pirates of the Caribbean – Battle for the Sunken Treasure once more, too.) 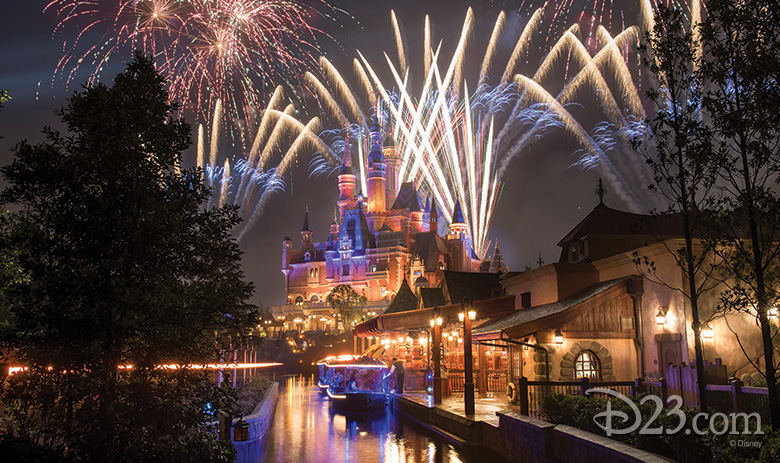 As the sun set, we got into place once again in front of the Enchanted Storybook Castle to experience Ignite the Dream, the park’s signature nighttime spectacular. Brilliant projections, dazzling fireworks, high-tech lasers, and fountains of water come together to create one of Disney’s more jaw-dropping events. Mickey Mouse is our host as we travel through the songs and stories of The Lion King, The Little Mermaid, Frozen, and many more. The fantastic projections turned the castle into a glittering show palace for “Friend Like Me” from Aladdin, and a beautiful collection of Chinese lanterns float to the sky in a segment dedicated to Mulan. We even blast off into hyperspace with a thrilling Star Wars movement. The show culminates in an explosive burst of color and light—igniting our dreams and the skies high above Shanghai Disneyland.

Strolling out, walking with guests grinning from ear-to-ear, we passed under the park’s archway in which “See ya real soon” is written in both English and Chinese. All we could think was, we sure hope so. 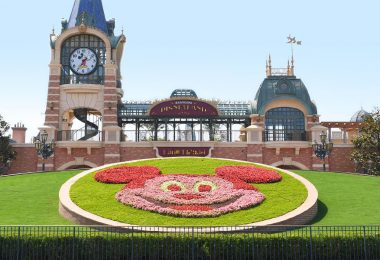 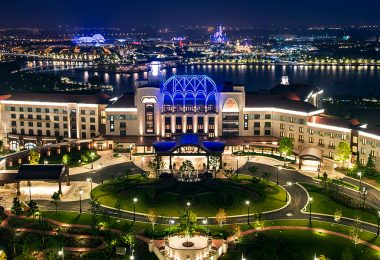 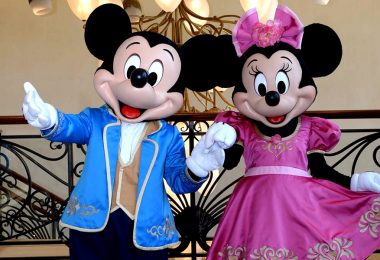