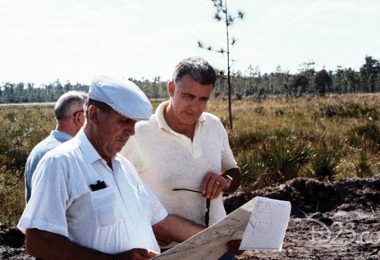 Q : Hi Dave! I was wondering how often did Walt visit the Florida project? Do you happen to know the date of his last trip to the property? Also is there any pictures of him of him on property? I have only seen a handful. Thanks!
Justin Hayes, Eden Prairie, Minnesota
A: Walt first flew over the property where Walt Disney World would be built in November 1963. He went to the property also in November 1965. His last trip was in May 1966, when he visited the site by Jeep. There are indeed only a few photos that exist.
Q : A few years ago, we took the steam train tour. At the end of the tour, our guide who was wonderful, did a flip chart talk. In the flip chart was a section on Greenfield Village. Why was Greenfield Village so important to Walt that of all the places he visited, this was special enough to be mentioned. I live about a twenty minute ride from Greenfield Village.
Nicholas, Wyandotte, Michigan
A: Walt Disney first visited the Henry Ford Museum and Greenfield Village in 1940, and again eight years later. He was always fascinated by anything mechanical, so he spent a lot of time in the museum examining engines and old cars. But it was in the village that he found historic means of transportation, including a steamboat that traveled around an island, along with old homes, businesses, and even a carousel. No doubt when he left, he had visions of an entertainment venue he could create which would transport guests into a bygone era.
Q : Walt Disney bought a Lamborghini. Do you know what happened to it?
Steve, Pretoria, South Africa
A: I am unaware that he ever had a Lamborghini. His first car was a Moon roadster in the 1920s. He drove primarily Packards throughout the rest of his life, though he had a Lincoln and a Jaguar in 1965; his last car was a Mercedes SL 230.
Q : I would like to know if Walt Disney ever appeared on any late-night talk shows, particularly The Tonight Show starring Johnny Carson. If so, is the interview available to see? I don't recall ever seeing him on any talk show.
John, San Diego, California
A: We are unaware of any such appearance.
Q : Did Walt and Lillian ever visit the resorts in French Lick, Indiana? Most of Hollywood did during the 1930s and 1940s.
Michael, San Leandro, California
A: We are unaware of any such trip.
Q : We obtained a copy of “The Story of Disneyland” on either July 20 or 21, 1955 on our visit to the Park in its first week of existence. During that visit, we encountered Mr. Disney and asked if he would autograph the brochure. He declined on the grounds that if he started that it could/would create problems with additional requests but said that if we would send the booklet to him at the Studio he would autograph it and return it. We did indeed send it, and it was returned with a personalized autograph. We’re interested in trying to authenticate the signature as Walt's own, since we understand that he did have licensed “forgers” who were allowed to sign in his “stead.” Any assistance you can provide will be greatly appreciated
Steve, Chocowinity, North Carolina
A: The same thing happened to me when I asked Walt for his autograph in the park. Unfortunately, the inscription on your item was not written by Walt Disney, but rather by one of the artists who was authorized to sign his name.
Q : I am dyslexic and I get conflicting reports if Walt Disney was dyslexic. Can you shed some light on this?
Anthony, Mandeville, Louisiana
A: No, despite rumors on the Internet, Walt Disney was not dyslexic.
Q : Would you be able to clarify the difference and history between Retlaw and WED? Also I was concerned about the possible hard feelings I heard existed between Walt and Roy over these two entities.
Jaimie, Chilliwack, British Columbia
A: Walt Disney created WED Enterprises in 1952 to handle his family’s interests, at first primarily in designing and creating Disneyland. Walt Disney Productions purchased WED from Walt in 1965, and at that time Walt created Retlaw (Walter spelled backwards) Enterprises to continue handling his family’s interests. (WED was renamed Walt Disney Imagineering in 1986.) Back in the early 1960s, Roy, worried about possible stockholder complaints, expressed concerns to Walt regarding the intertwined working relationship between Walt, WED, and the company, which led to a lengthy argument and the brothers not speaking to each other for a while.
Q : I am looking for Walt Disney’s pictures in Rio de Janeiro (1941). Especially when he went to Portela School of Samba. Do you know where I can find these pictures?
Denise, Los Angeles, California
A: Photographs from Walt’s trip to South America are published in JB Kaufman’s book, South of the Border With Disney, and used in the 2008 film documentary, Walt & El Grupo.
Q : I have heard that Walt Disney received the Silver Buffalo Award from the Boy Scouts of America. Can you tell me more about Walt's connection to that organization? Was he an Eagle Scout?
Caleb, Foresthill, California
A: Walt joined a Boy Scout troop in 1914 formed from Sunday school classes in the Congregational church that the family attended in Kansas City, Missouri. He was not in the troop very long, reaching only the Tenderfoot level, but he maintained a great respect for the Boy Scouts throughout his lifetime.