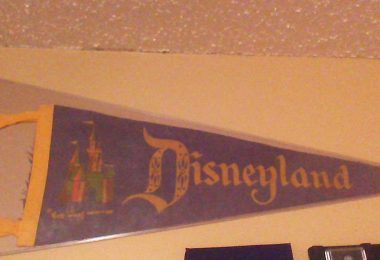 Q : Hello, my name is David and I have been collecting old Disneyland items an I stumbled across this one a couple of years ago. My question for you is, what era would this Disneyland Pennant be from. It has "Walt Disney Productions" underneath the castle. Any help is great! Thanks in advanced"
David, Edmonton, Canada
A: There were many different pennants that were released at Disneyland in the mid to late 1950s; the first had a shield on the left picturing logos of the four realms of Disneyland.  In 1958 you could buy one by mail order for 48¢.  We have been unable to date the various versions.
Q : Hi Dave, I have an Aristocats figurine set of Thomas O'Malley, Roquefort, and Marie. It's branded under the Disney Magical Collection (the literature is in Japanese). I was wondering what are they made out of exactly? Thanks!
Kassandra, Seattle, Washington
A: These figures, of PVC plastic, are made by the Japanese company, Tomy. There have been many figures from different animated films in their Disney Magical Collection.
Q : My wife is the great niece of Ruth Ivener. Through her family documents and through online searches, I cannot find a picture of her anywhere. Do you know if one exists?
Jonathon, Westlake Village, California
A: Ruth Ivener worked with Kay Kamen handling Disney merchandise licensing in New York in the 1930s and 1940s, but I do not offhand recall a photo of her.
Q : I’ve been researching the history of bell toys, most made in East Hampton, Connecticut. I understand that in the 1930s, Gong Bell produced several Mickey Mouse toys. Later N. N. Hill Brass was producing bell toys with the Mickey Mouse image, as well as Donald Duck and Snow White characters. Can you tell me anything about the start dates for the merchandising of the Mickey Mouse or other Disney toys by these companies? How were these toys designed? Did a manufacturer make a suggestion and then a Disney artist made the image for the toys? I can’t imagine these toys being designed by artists at the toy manufacturers.
Robert, Milford, New Jersey
A: N. N. Hill Brass Co. was a Disney licensee from 1933 to 1942; the Gong Bell Manufacturing Co. from 1956 to 1960. We have no specific information on how their toys were designed, but normally an artist from Disney’s New York office would be assigned to ensure that the character design was “on model,” but the manufacturer would handle the design of the toy itself.
Q : I have three Walt Disney books published by D.C.HEATH AND COMPANY in 1939 and 1940. Do these books have any value in the collectors market?
Phyllis, Lehigh Acres, Florida
A: Many copies are offered on eBay, so you can see the asking prices there.
Q : I have the 1955 Edition of the Little Man of Disneyland Golden Book and the record. It was given to me by my mom and we have cherished it all these years. I am now 64, and if The Walt Disney Company would like to have this copy, I would like to place that request in my will. Maybe Disney does not need another one of these books and I understand if that would be the case. Please contact me and let me know how I should proceed. D23 Guest Relations suggested I contact you in this manner.
Elizabeth, Torrance, California
A: We appreciate your offer, but the Walt Disney Archives already has copies of Little Man of Disneyland. 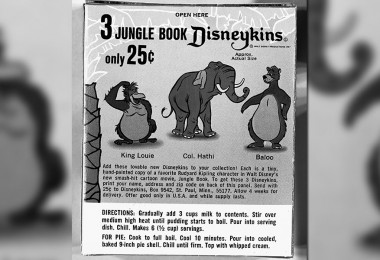 Q : I have a set of 34 hand-painted Disneykins that my brother got me back in the late ’60s–early ’70s. They are in a cardboard windowed showcase. The original sticker is on them for $2.98 and they were bought at G.C. Murphey’s. Can you tell me their value?
Felicia, Hardy, VA.
A: There were more than 100 different Disneykins (tiny Disney characters) produced by Louis Marx and Company under license from Disney. The sets of 34, which came together in a box, frequently turn up for sale on eBay, so you can check out prices there. Half a dozen sets are being offered as I write this. 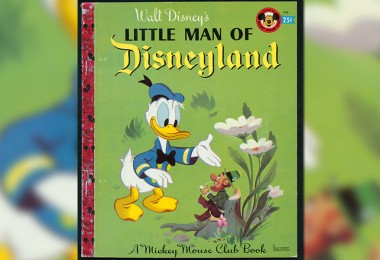 Q : I was just at D23 EXPO 2015 and I just got the reprint of the Golden Book, The Little Man of Disneyland, which I enjoyed. But after reading the book I noticed that two pages were missing, because I have an original copy at home. My question: What happened to the missing two pages?
Dennis, Buena Park, California
A: The reprint of the book is labeled “Originally published in a slightly different form by Simon & Schuster, Inc., in 1955.” Evidently some minor changes were made by the publisher. 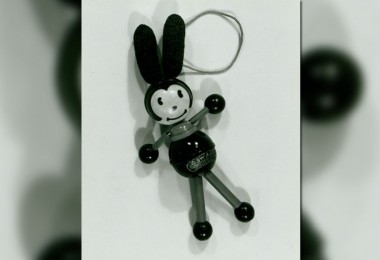 Q : I know you have a lot in your Archives. I was wondering if they ever made a Julius the Kat stuffed toy? And, if so, do you have one in your Archives?
Lauren, Ash Flat, Arkansas
A: There was never a Julius stuffed toy. The first merchandise items featuring a Disney-created character were for Oswald the Lucky Rabbit. 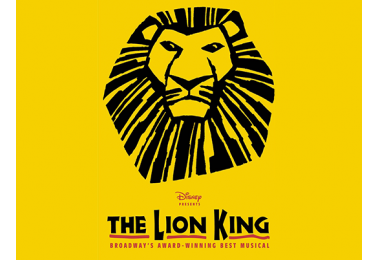 Q : Did the books The Lion King and Six New Adventures get written by any employees of Disney at the time, or was it simply written by a few fans who got permission from the company to write tales based off of the movie(s)?
Ashley, Boise, Idaho
A: The stories were created by professional writers and illustrators, several of whom had written and illustrated children’s books for Disney previously.