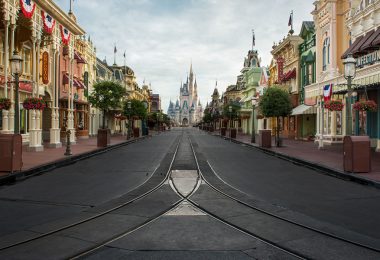 Q : Was there ever a shop on Main Street in Walt Disney World where you could dress in period costumes and they would take your picture like you were on the back of a train? A friend swears they had this in the mid 1980's but they don't have the pictures to back it up.
Jim, New Fairfield, CT
A: This was part of the Camera Center on Main Street, U.S.A. in the early 1980s when it was sponsored by Polaroid (they sponsored from 1979 to 1984). Guests would put on 19th century costumes and pose for photos in the back of a railroad car, themed to the Walt Disney World Railroad, for an “instant 8x10 portrait.” 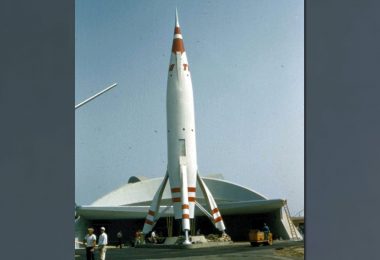 Q : When Disneyland first opened wasn't there a ride "spaceship to the Moon and back"" or something like that? any information you have will be most appreciated. I remember my parents taking me on a ride to the moon and when we came out hysterically crying. I thought we were still on the moon. I was about 11 years old and I did not want to stay on the moon.
Joan, Palm Coast, Florida
A: The very realistic Rocket to the Moon attraction opened in Tomorrowland on July 22, 1955, just a few days after the park’s opening.  It was originally sponsored by TWA and later by McDonnell-Douglas.  Each sponsor, during their sponsorship, had their logo on the tall upright rocket ship displayed outside the attraction.  It later became Flight to the Moon (1967) and Mission to Mars (1975), finally closing in 1992.
Q : When Disney-MGM studios changed to Disney's Hollywood studios why did they have to get rid of residential street? And why did the Teenage Mutant Ninja Turtles become Nickelodeon?
Matt, Tampa, Florida
A: The residential street was demolished in 2003, to make room for the Lights, Motors, Action! Extreme Stunt Show, which debuted in 2005. The park’s name change to Disney’s Hollywood Studios did not come until 2008. The Teenage Mutant Ninja Turtles were never a Disney franchise, but they were licensed to appear on New York Street starting in 1990 during the time the Turtles’ TV show was popular. They remained at the park until 1996. (Nickelodeon purchased the rights to the Turtles in 2009.) 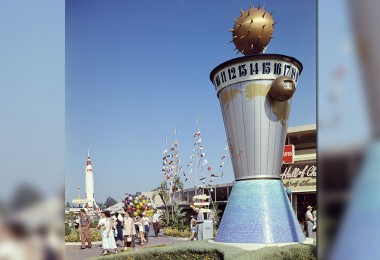