Home / Walt Disney Archives / Ask the Walt Disney Archives / Parks & Resorts
Q : In Disneyland’s Adventureland, there is a box with the name Amelia Wiley Aviations on it just above Tropical Imports across from the Bazaar. Is this in reference to Amelia Earhart?
Theresa, Huntington Beach, California
A: It is probably referring to Amelia Earhart and Wiley Post, both famous aviators. 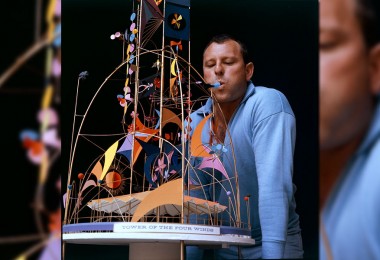 Q : Does the concept model of the Tower of the Four Winds still exist and, if so, has it or will it ever be on public display?
Jeff, Cottonwood, Arizona
A: A version of the model was on display at Disney’s Contemporary Resort for many years; it has since been displayed in the One Man’s Dream attraction at Disney’s Hollywood Studios.
Q : Back in the mid-1990s, Michael Eisner attempted to create a History theme park near Williamsburg, Virginia. What were some of the concepts for the park and attractions going to be?
Randal, Windsor, Ontario
A: Here is my entry from Disney A to Z: Disney’s America.
Q : I would love to know more about Larry Groce and the history of Disney’s Christmas albums. Hearing Groce’s voice on various records, 8-tracks, cassette tapes, and, later, CDs was a big part of my childhood and one of my chief Disney memories. I was aware at the time that these recordings were repackaged and re-released multiple times and predated my childhood. When were the original recordings done?
Matt, Hudson, North Carolina
A: Larry Groce was a singer and songwriter with a folksy style, who worked on many recordings for Disneyland Records. His first Disney recording, in 1976, was the single “Winnie the Pooh for President.” Some of his albums were Disney’s Christmas Favorites (1979), Disney’s Children’s Favorites (1979), Disney’s Merry Christmas Carols (1980), Pardners (1980), Goin’ Quackers (1980), and The Disney Family Christmas Album (1981). Groce was known for recording each song in one take. He is still living. 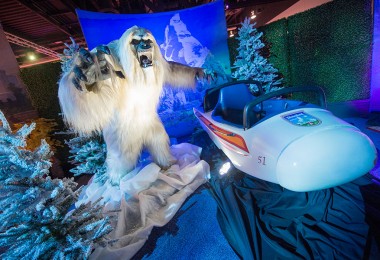 Q : Are objects from retired rides at Disneyland in the Walt Disney Archives and, if they are, can you list some examples?
Anonymous
A: Yes, the Archives has collected some items from retired and renovated Disneyland attractions, such as ride vehicles, signage, costumes, props, etc. Examples include Oscar, the Audio-Animatronics® small bear from the Country Bear Jamboree, a former bride figure from the Haunted Mansion attic, Slue Foot Sue’s costume and mirror from the Golden Horseshoe Revue, the earliest Lincoln head from Great Moments with Mr. Lincoln, and props from America Sings. The Archives more recently acquired the original Abominable Snowman figure from the Matterhorn Bobsleds. 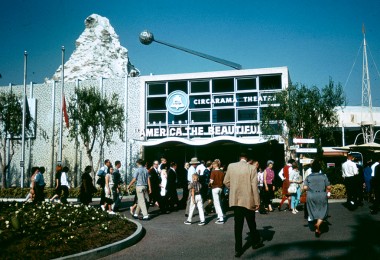 Q : I am an art history graduate student studying American visual culture at USC. I am hoping to develop a project around the multiple versions (and display contexts) of Walt Disney’s short film America the Beautiful during the late 1950s and early 1960s. While grainy footage from the 1958 version has been uploaded to YouTube, I would like to be able to view a better quality version of the 1958 film and its 1960 iteration (when it was moved for display at Disneyland). Could you provide any information about how a researcher like myself would be able to access such materials? It’s such a fascinating film and I would like to devote more attention to it! Thank you so much in advance.
Emma, Glendale, California
A: Unfortunately the film is not currently available. Here is the entry from my Disney A to Z encyclopedia.
Q : On the Haunted Mansion soundtrack, they did one of the bonus track demos on it that says “Mildred Pierce” in the background of one of them. Why did they say her particular name? It’s got me curious because it’s the name of my great grandma.
Amanda, Corona, California
A: It was probably a reference to the well-known 1941 novel by James Cain. The novel was later made into a movie and a television mini-series. 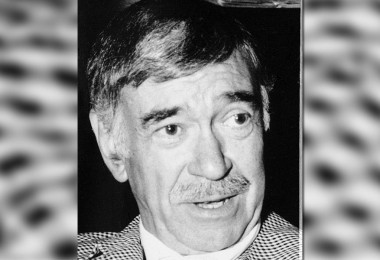 Q : I’ve heard two conflicting stories about the Haunted Mansion singing busts and I’d like to see which is correct. One: The Mellomen sang the harmonies, but studio actors were brought in to play the faces in the ride. Two: Those studio actors were gathered to sing the song AND portray the busts. Other than Thurl Ravenscroft, were any of the other Mellomen involved with Haunted Mansion?
Ethan, Jamaica, New York
A: Thurl Ravenscroft is the only one of the Mellomen to be filmed as one of the singing busts in the Haunted Mansion. The other four busts are Verne Rowe, Chuck Schroeder, Jay Meyer, and Bob Ebright. The men who did the singing were the ones that were filmed.
Q : I’m looking for information and photos of part of the Disneyland Hotel property to authenticate an architectural item. Do you have Disneyland Hotel records? If so, is the archive accessible for research?
Theresa, San Diego, California
A: The Walt Disney Archives does not have a lot of early photographs of the Disneyland Hotel, because initially it was owned by Jack Wrather, not Disney. Perhaps you can get some help from Don Ballard’s heavily-illustrated books on the history of the hotel. 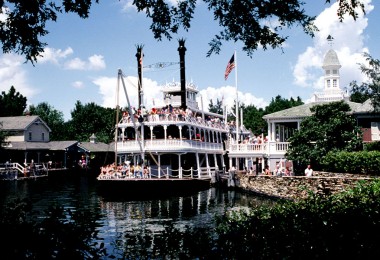 Q : I recently had the pleasure of seeing you speak at the Destination D panel at D23 EXPO 2015. In your presentation you briefly mentioned the steamship Admiral Joe Fowler and how it was retired in 1980. Is the Mark Twain Riverboat at Tokyo Disneyland actually the Admiral Joe Fowler? I have compared photos of the two boats and the similarities are uncanny. And, if not, what happened to the Admiral Joe Fowler?
Jaxon, Salt Lake City, Utah
A: The two riverboats are not the same. The Admiral Joe Fowler at Walt Disney World reached the end of its useful life and was removed from service and dismantled.