Home / Walt Disney Archives / Ask the Walt Disney Archives / Walter Elias Disney
Q : In 2012, we took the Magic Behind Our Steam Trains tour. At the end, the guide did a flip chart talk and on one of the charts was “Greenfield Village” in Dearborn, Michigan. My question is: What was so important about “Greenfield Village” that it deserved to be mentioned? Note that “Greenfield Village” does have a steam train running around the park, a hub and spoke design, and a steamboat going around an island.
Nicholas, Wyandotte, Michigan
A: Walt Disney had visited Greenfield Village, and the Henry Ford Museum, and it seems obvious that he remembered things he had seen there when designing his own park—Disneyland.
Q : It seems like this should be very simple information to locate, but I can't find anything definitive anywhere, so I turn to the expert. Was Walt Disney left-handed?
Randy, Santa Ana, CA
A: No, he was right-handed.
Q : A few days ago, [we found] a signed photo of Walt Disney in my aunt's attic, which was originally her father's house. It's dated November 28, 1966. I just wanted to ask what I should do with it because my Aunt wants me to sell it to a pawn shop, but I wanted to ask a guy who knows Disney.
Genisis, Fort Edward, New York
A: You can submit a scan of it to the Walt Disney Archives (Disney.Archives@disney.com) and they may be able to tell you something about it.
Q : We found a commencement speech online that is attributed to Walt Disney, but all of our research has hit a “dead end” as far as when and where he gave this speech. Can you please verify that he did give the speech and please provide us with the “when” and the “where”? I’ve attached the speech below.
Connie, Lake Villa, Illinois
A: This speech seems to be a fabrication.
Q : Is there a scanned image of the document that was on Walt’s desk that mentions upcoming projects and Kirt (sp) Russell. If so, is there a way to get a better copy of it?
Gary, Huntington Beach, California
A: You would need to contact the Walt Disney Archives, at Disney.Archives@disney.com.
Q : The recent Walt Disney biography on American Experience stated that Walt was the one who decided to change the name of the Disney Brothers Cartoon Studio to the Walt Disney Studio, however the D23 site states that it was Roy’s idea (and I believe Bob Thomas also mentions it being Roy’s idea in Walt Disney: An American Original). Is there anything out there that would suggest Walt was behind the change instead of Roy? I’m curious to know what information PBS may have been referencing. What evidence do we have that Roy was the one that suggested the change?
Mark, Cypress, California
A: Some biographical sources have suggested that it was Walt’s idea, but in 1970 or 1971, I personally asked Roy O. Disney about the name change, when visiting with him in his office. Roy told me that it was his idea. He felt that since Walt was the creative one, his name should be on the company, and also the public could better identify with a single individual. 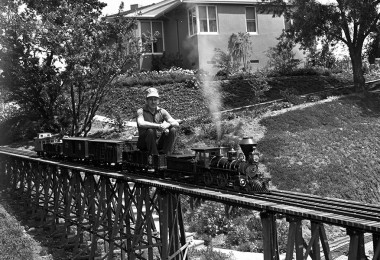 Q : Did Walt have a favorite place to go if he was feeling stressed or distracted?
Camille, Pawtucket, Rhode Island
A: Walt often referred to Walt Disney Imagineering (then WED Enterprises) as his “laughing place.” There he could take a respite from his duties as head of a major company and go watch the Imagineers at work imagining fantastic things that could be added to Disneyland. When he had his backyard miniature railroad, he also found that he could relax spending time working with it. 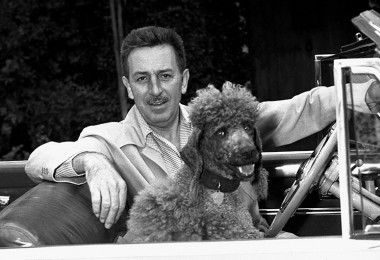 Q : When Walt Disney gave his wife Lillian a puppy in a hatbox as a Christmas present—which inspired Lady’s introduction in Lady and the Tramp—is it known what the puppy’s name was? And if so, who named it—Walt or Lillian?
Emily, Selden, New York
A: The puppy in the hatbox was a chow named Sunnee—we are not aware of who named her. The Disney family had Sunnee for a number of years, though in the 1940s they got a large poodle named Duchess Disney.
Q : What personal or professional relationship, if any, did Walt Disney have with Ronald Reagan? Although going on to become President of the United States, Ronald Reagan was former Hollywood actor and soon-to-be governor of California at the time of Walt’s passing. Did Walt Disney and Ronald Reagan’s various careers or personal lives ever coincide beyond the grand opening ceremony of Disneyland in 1955?
Brock, Dartmouth, Massachusetts
A: Then California governor-elect Reagan said in a December 15, 1966, radio interview that though he had never made a picture with Disney, he had known Walt as a “friend”—sounding very distraught over the news of Walt’s passing. Based on personal correspondence between them, it’s clear that Reagan had much respect for Walt, and valued his help at the beginning of his political career, when Walt had supported him. Reagan was also an early proponent of issuing the Walt Disney commemorative stamp in 1968—saying that because of Walt “the world is a richer, better, place.”
Q : I recently asked you on the Disney Wonder about whether Walt Disney had been to Pago Pago, American Samoa. If you learn something about this, please let me know.
Lewis, Pago Pago, American Samoa
A: Walt Disney visited Pago Pago on October 22, 1962, while on a South Pacific cruise on the S.S. Mariposa. On that trip he also visited Bora Bora, Papeete, Nandi, and Honolulu.