Home / News / D23 Exclusive / Get a Wickedly Wild Inside Look at Disney Villains: ...

The greatest heroes must face the greatest villains. For decades, Walt Disney Animation and Pixar Animation Studios have been dreaming up some of the most iconic and malevolent villains ever to grace the silver screen. Disney Villains: Delightfully Evil is not just a comprehensive catalog, but a showcase of rare concept art, story sketches, photographs, and more from the past eight decades of Disney and Pixar filmdom. D23 sat down with the book’s author, Jen Darcy, to talk about how she crafted this wickedly wild volume: 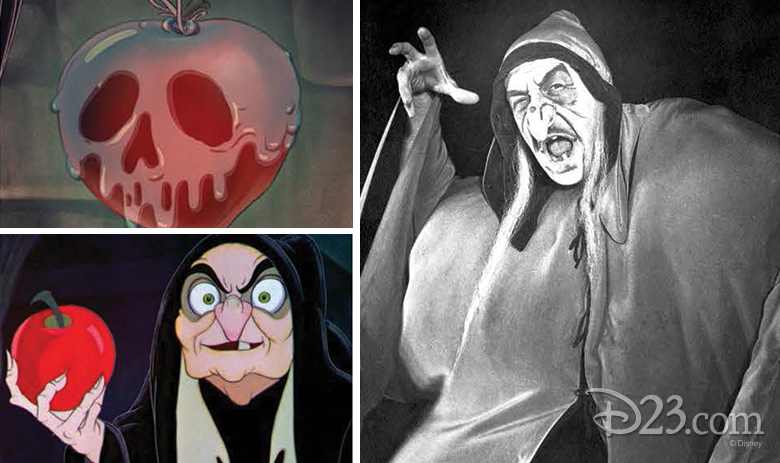 D23: You not only wrote the text, but also curated most of the images included in this book. How did you begin searching for images? Did you find things you weren’t looking for?
Jen Darcy (JD): I was so excited to hunt for just the right image that could either change the whole direction and feel of a villain’s entry or provide validity to the text I had already written. I decided I would research in chronological order, even though that is not how we decided to organize the book in the end, and so I began with Snow White and the Seven Dwarfs. The Queen/the Witch is such a timeless villain. She’s beautiful, polished, and dark with the ability to transform herself into a hideous old witch. I was looking for a fun image of the character’s voice actress Lucille LaVerne. I remembered that Walt Disney often had people dress as the animated characters and act out scenes for the animators to use as live-action reference footage. I started searching for a LaVerne photograph in that vein and was incredibly happy when I instead came across the image of actor Don Brodie as the Witch (above right). I knew that needed to be in the book. 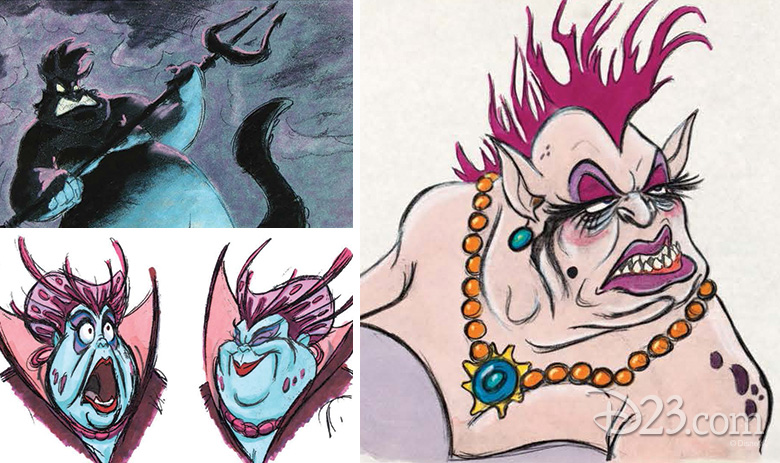 D23: Do you have a favorite Disney villain? If so, did you give them special attention when making the book?
JD: Like so many Disney animation fans, I think it is hard to pick just one, so my favorite villains are Ursula from The Little Mermaid and Shere Khan from The Jungle Book. Admittedly, researching their characters were some of the highlights for me.

When I went to Disney’s Animation Research Library (ARL), I was blown away by the number of pieces they had from different artists drawing the basic concept of a “sea witch.” I thought, how would it be possible to choose just one or two visual development studies of Ursula? Thus there are a couple pages in the book dedicated to these early visions for the larger-than-life, part-octopus/part-woman, who’s so good that she could convince anyone to sign on the dotted line. 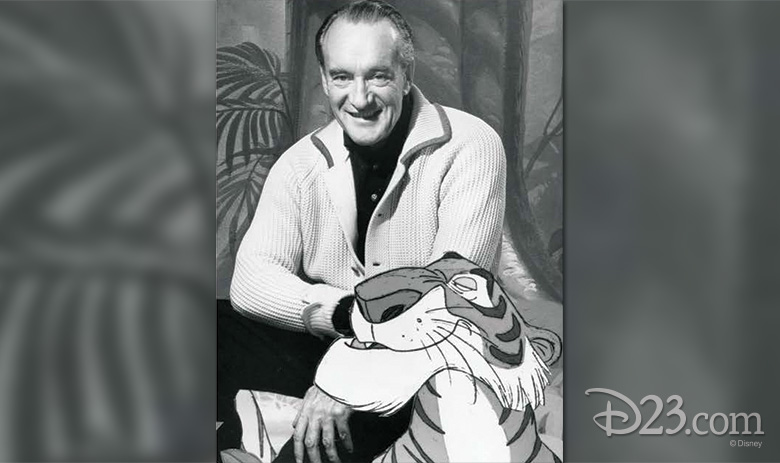 For Shere Khan, I knew even before I started my research that I wanted to focus on George Sanders, the voice actor for the self-proclaimed king of the jungle. From when I was the art coordinator for Disney Magazine, I remembered working on an “Archives” photo page where we featured a composite picture of Sanders and the animated Shere Khan. I loved how they both had the same smile. Thanks to Kevin Kern at the Walt Disney Archives, that exact image made it into the book. Simply from my brief description, he was able to find it in the original press kit, and he scanned it that very day. By the time the book layout was designed grouping Shere Khan, Kaa, and King Louie together under a joint entry, the photo didn’t fit well on the page. Luckily, we had extra room on the image credits page at the back of the book, and there they are… smiling their devilish smiles. 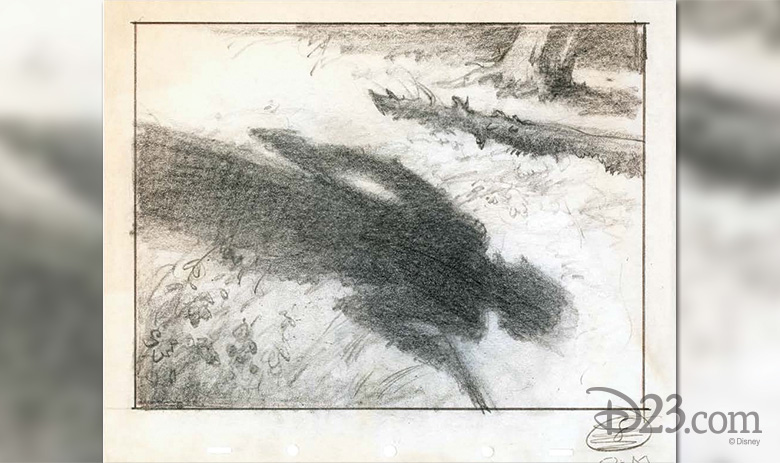 D23: What are some of your other favorite moments from making the book?
JD: One of my favorite parts was working with Fox Carney at the ARL. I traveled out to California with my wish list of images, and what I got at the ARL was so much more. Fox was able to pull image after image of things I could not have even imagined, like concept art of Man from Bambi. I mean, how was I ever going to find an image to go along with a villain that isn’t shown in the film? 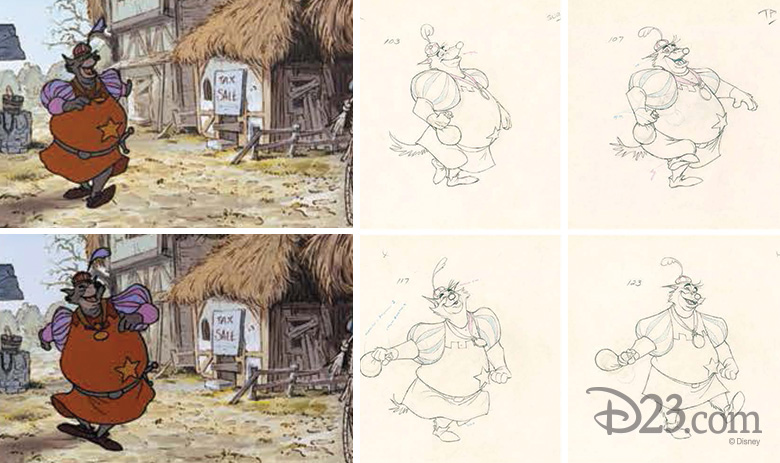 Fox was also able to find the cleanup animation for the Sheriff of Nottingham from Robin Hood, and that really brought to life the care that animator Milt Kahl took to make sure the Sheriff’s buoyant walking style was consistent throughout the film.

At the end of this project, I found myself completely amazed at all that I had learned about the Disney villains and the creative people who brought those incredible characters to life. But I also found myself incredibly grateful for all of the people at the many Disney libraries and archives. They manage the histories of these characters and the people who created them, and they are an amazing resource. 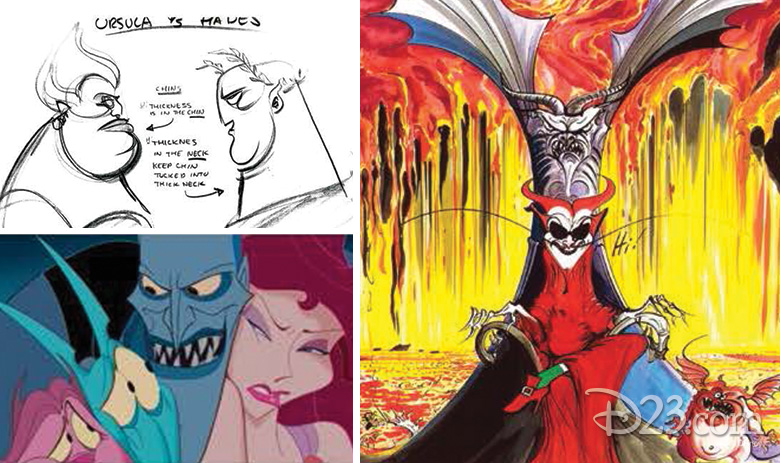 D23: If you had to pick your single most favorite image in the book…
JD: …It would be artist Gerald Scarfe’s vision of Hades as Jack Nicholson (above right), drawn when Nicholson was being considered for Hades’ voice actor role in Hercules, before the part went to James Woods. 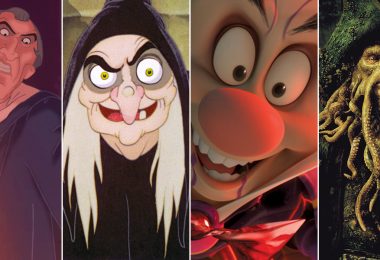