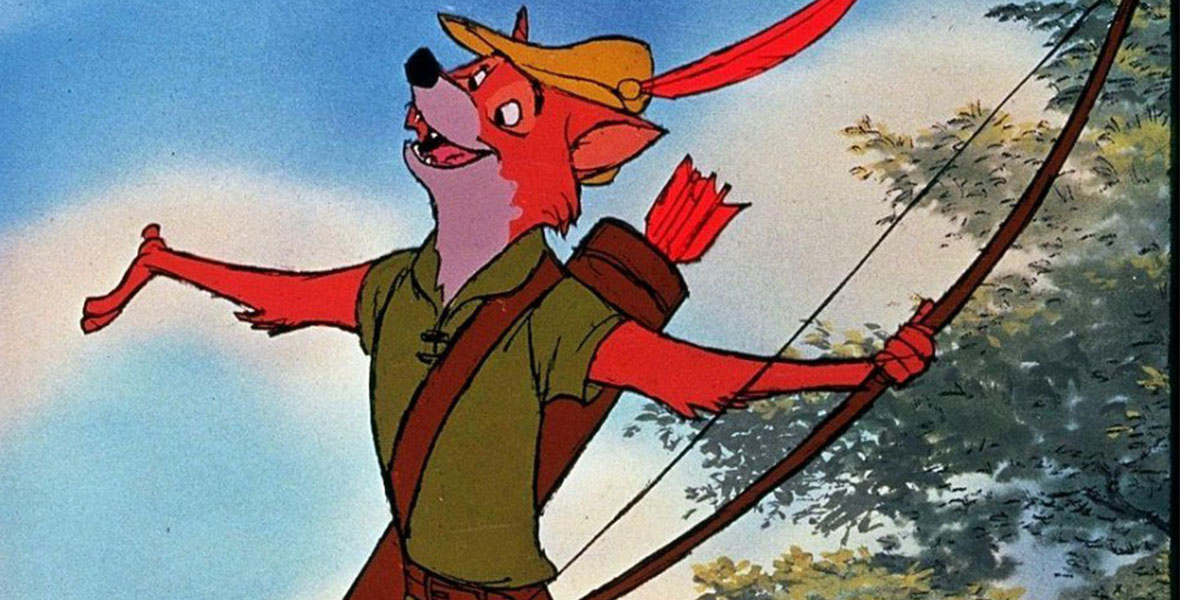 Robin Hood (film) Story of England’s legendary hero of the common people is told by traveling minstrel Allan-a-Dale. The story is enacted by an assortment of cartoon animal characters (Robin Hood and Maid Marian are foxes, Little John is a bear, King Richard and Prince John are lions, etc.). Robin Hood rebels against the villainy of Prince John, and his accomplices, Sir Hiss and the Sheriff of Nottingham. Prince John has usurped the throne of King Richard, his brother, who was captured on the Crusades. With Little John, Friar Tuck, and the townspeople of Nottingham, Robin defeats the runty prince and his minions and Richard is free to return and reclaim his kingdom. Released on November 8, 1973. Directed by Wolfgang Reitherman. 83 min. Features the voices of Phil Harris (Little John), Brian Bedford (Robin Hood), Roger Miller (Allan-a-Dale), Peter Ustinov (Prince John/King Richard), Terry-Thomas (Sir Hiss), Andy Devine (Friar Tuck), Monica Evans (Maid Marian), Pat Buttram (Sheriff of Nottingham), George Lindsey (Trigger), Ken Curtis (Nutsy), Carole Shelley (Lady Kluck). The songs, by Johnny Mercer, George Bruns, Roger Miller, and Floyd Huddleston include “Whistle-Stop,” “The Phony King of England,” “Love,” “Oo-de-lally,” and “Not in Nottingham.”  The song “Love,” by George Bruns and Floyd Huddleston, was nominated for an Academy Award. In several sequences, George Bruns sought to capture the flavor of the period by using medieval instruments such as French horns and harpsichords, and occasionally just a mandolin. The Robin Hood legend has long been popular with moviemakers, from the silent version starring Douglas Fairbanks, the Errol Flynn classic of 1938, Disney’s own live-action version The Story of Robin Hood and His Merrie Men in 1952, Sean Connery and Audrey Hepburn’s Robin and Marian in 1976, to Kevin Costner’s version in 1991. Some 350,000 drawings were made for the production, with over 100,000 painted cels and 800 painted backgrounds. The film was re-released in theaters in 1982. Released on video in 1984 and 1991.