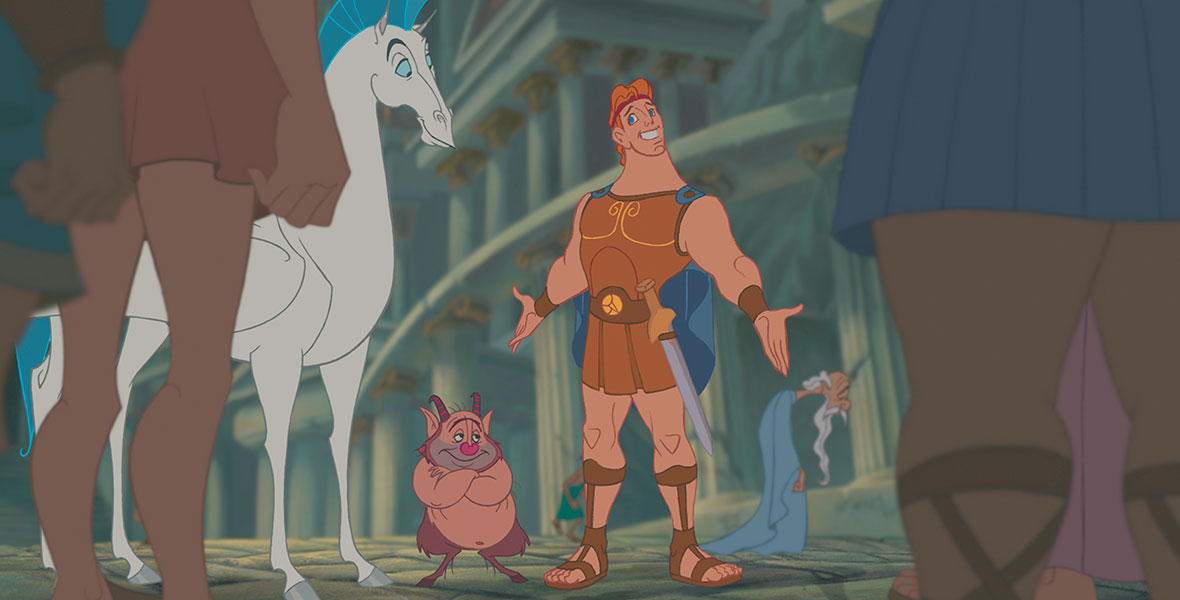 Hercules (film) Hercules, the mighty son of Zeus and Hera, is taken from his Mount Olympus home and raised on Earth. The fiery figure behind Hercules’s disappearance is Hades, the hot-headed god of the Underworld who has grown tired of looking after a “bunch of deadbeats” and sees Zeus’s son as an obstacle to his plans to take over Olympus. Hades sends his two dim-witted sidekicks, Pain and Panic, to abduct Hercules, though they bungle their mission by not administering the final drop of a potent potion, which leaves the infant with god-like strength but human mortality. As Hercules grows up, he discovers the truth about his origins and sets out to prove himself a true hero (with the help of a veteran hero-training satyr named Philoctetes) so he can return to Olympus. Hades has other plans and tries to kill him by arranging a catalogue of calamities (a multiheaded Hydra, a Minotaur, a Cyclops, an army of Titans, and the traitorous damsel-in-distress, Megara). Along the way, Hercules discovers that a true hero is not measured by the size of his strength but the strength of his heart. Directed by John Musker and Ron Clements. General release on June 27, 1997, after a June 14 premiere at the New Amsterdam Theater in New York City, and a limited release beginning there the next day. Stars the voices of Danny DeVito (Phil), Tate Donovan (adult Hercules), Susan Egan (Megara), James Woods (Hades), Charlton Heston (opening narrator), Matt Frewer (Panic), Bobcat Goldthwait (Pain), Paul Shaffer (Hermes), Rip Torn (Zeus), Samantha Eggar (Hera), Joshua Keaton (teen Hercules speaking), Roger Bart (teen Hercules singing), Hal Holbrook (Amphitryon), Barbara Barrie (Alcmene). 93 min. Music, with six songs in a pastiche of styles, including gospel, is by Alan Menken with lyrics by David Zippel. Musker and Clements were attracted by the mythological aspects of the Hercules story, and decided to produce the film, along with Alice Dewey, in the fall of 1993. Over the next nine months, the two collaborated on an outline, several treatments, and eventually an initial script, aided by art director Andy Gaskill, who oversaw the visual development on the film. British artist/political cartoonist Gerald Scarfe, with a bold, expressive linear style, was brought in to assist with character design, and he remained involved as an ongoing artistic adviser to the animators. A field trip to Greece and Turkey in the summer of 1994 gave artists a firsthand look at landscapes and ancient sites, and an opportunity to hear expert accounts of classic Greek mythology. Animation began in early 1995, and eventually a team of nearly 700 artists were involved with the project. The film features the first use in animation of the process of morphing, wherein an object is made to smoothly transform into another, utilizing computer technology. Released on video in 1998.