We’ve been jumping to lightspeed with Star Tours since the attraction opened in 1987, although nowadays we experience our galactic adventures through the updated Star Tours—The Adventures Continue. As we celebrate over 30 years of amazing adventures with this Disney attraction found in parks all over the world, D23 has rounded up some fun facts about the Endor Express and beyond! 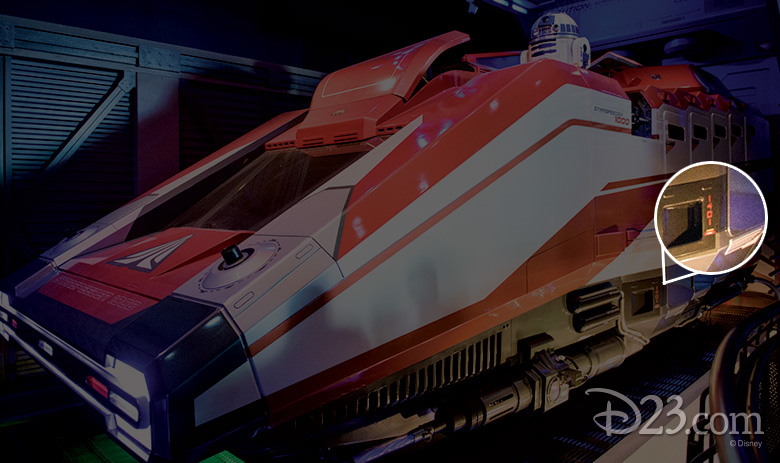 A Familiar Flight Number
While your destination changes every time you ride Star Tours—The Adventures Continue, the flight number always remains the same: 1401. That number is a special shout-out by the Imagineers who designed the ride, since the street address for Walt Disney Imagineering is 1401! Even when the Imagineers are flying out of this world, they can always take a little bit of their home with them. 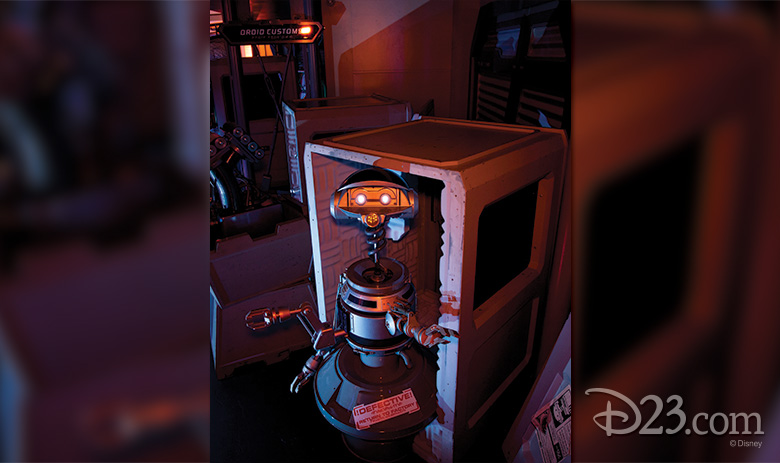 A Blast from the Past
Fans of the original version of Star Tours may recognize a familiar voice while they wait in the queue for Star Tours—The Adventures Continue. Sputtering out with a glitchy voice, “T-this is C-c-captain Rex,” and other notable quotes from his original run on Star Tours, everyone’s favorite first-time flier, Captain Rex, is boxed up in a crate labelled “DEFECTIVE,” waiting with other droids to be shipped to a new planet.

That’s not the only familiar thing you may hear, however. Throughout the ride’s different sequences, you may hear some familiar dialogue said by new characters: Coming upon the opportunity to complete a Death Star trench run, Captain Rex said “I’ve always wanted to do this!” and now C-3PO echoes that sentiment before entering a podrace. Keep your ears open as you experience the attraction, because you may soon find yourself yelling, “Brakes, brakes… Where are the brakes?!”

Still Getting Used to His Programming
Speaking of everyone’s favorite robotic pilot, poor Captain Rex never did manage to fly us to the moon of Endor in the original Star Tours. You might blame it on the little droid’s scatterbrained personality, or, if you ever looked closely at Rex while he was still captaining the original Endor Express, you might have noticed the big red pull-tab sticking out of his body that was labelled “REMOVE BEFORE FLIGHT.” I have a bad feeling about that…

Paging Egroeg Sacul…
While you are waiting in the Star Tours—The Adventures Continue queue and watching R2-D2 bicker with C-3PO, keep your ears open for the announcements. Egroeg Sacul and Mot Worrom are paged, the backwards names of George Lucas, creator of Star Wars, and Tom Morrow, the name of the host of various Disney attractions including Innoventions and Flight to the Moon. A land speeder with the license plate THX 1138 is also paged, referencing George Lucas’ very first film.

Inner Space in Outer Space
Before the original Star Tours at Disneyland was sending us to a galaxy far, far away, the ride building housed an attraction that had us explore a different kind of space. Adventure Thru Inner Space was a dark ride attraction that allowed guests to shrink down to the size of an atom and explore the inner workings of a snowflake! How were guests able to shrink down so tiny? Well, through the magic of the Mighty Microscope, of course! The giant, iconic microscope used to be the centerpiece of Adventure Thru Inner Space’s queue before R2-D2, C-3PO, and friends moved in. But don’t worry—the Mighty Microscope is still in the attraction! As you zoom through the Death Star in one of the possible endings for Star Tours—The Adventures Continue, look to your left  as you exit the deadly space station to spot the Mighty Microscope in its new home. The Rebels must have managed to steal it from the Imperials, though, because in the original Star Tours, just as you were about to fly out of the eminence bay, you pass by the Mighty Microscope on your right hand side. 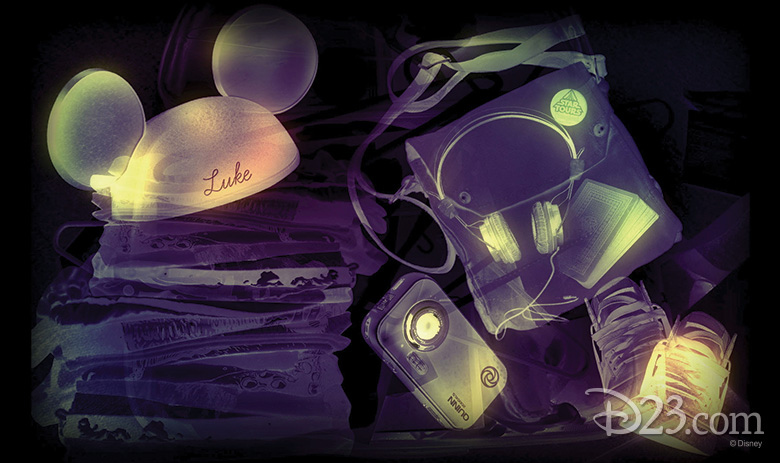 Packing Up Some Shout-Outs
If you’re looking for more shout-outs to your favorite Disneyland attractions, make sure to pay attention to what the droid G2-9T is scanning while he checks luggage in the attraction’s queue. All sorts of references are made on the scanner, from referencing the Storm Trooper TK421 (why isn’t he at his post?), to Madame Leota’s head, to Major and Minor Domo from the classic 3-D show Captain EO. While you’re waiting for your next trip on Star Tours, make sure to pay attention to what the droid scans, because you just might see a shout-out to your favorite Disney movie or attraction! Keep your eyes peeled for references to everything from Toy Story to The Black Hole to, of course, Adventure Thru Inner Space. 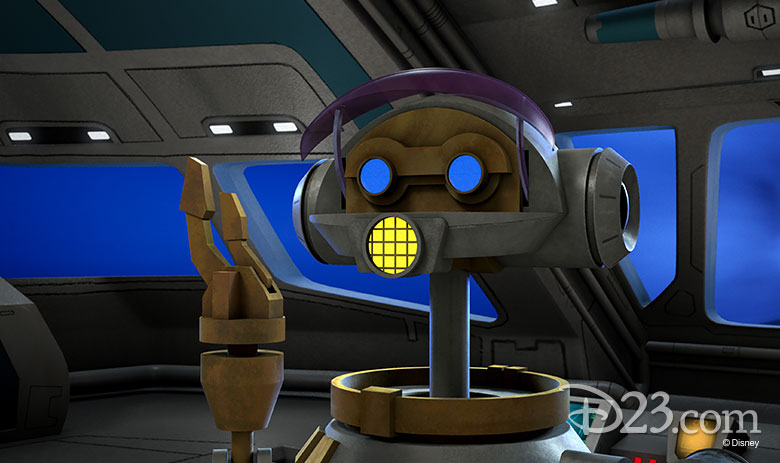 Do You Think Luke Ever Flew On Star Tours?
The events of the original Star Tours take you on a whirlwind experience of classic Star Wars moments, such as dodging an asteroid field and joining in on a trench run against the Death Star. Have you ever wondered if these events actually fit into the Star Wars story? Well, Star Tours as a company has actually been acknowledged in several episodes of the animated TV series Star Wars: The Clone Wars, including via a poster Easter egg in the episode “Lightsaber Lost.” And our favorite first-time pilot, Captain Rex, has a guest appearance on the animated TV show Star Wars Rebels (pictured above), in the episode “Droids in Distress.”

But just in case you wanted a full explanation for just how exactly Captain Rex’s silly adventures fit into Star Wars lore, StarWars.com has a detailed explanation of just how our favorite attraction fits into the galaxy far, far away. 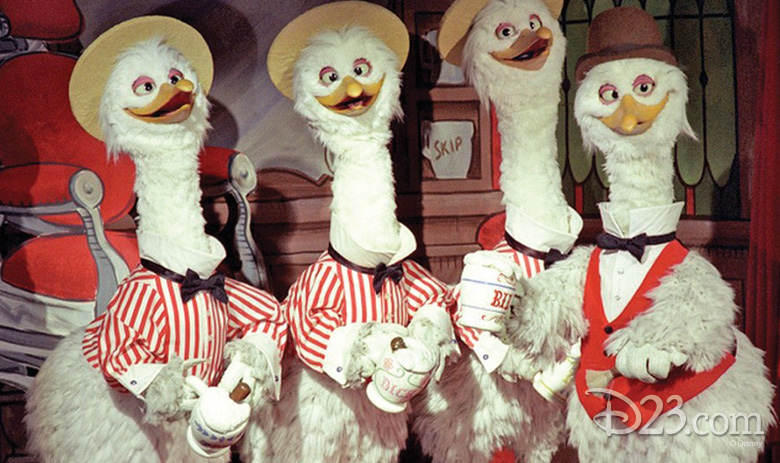 No Longer Feathered, But Still Friends
The Mighty Microscope isn’t our only shout-out to attractions from Disneyland’s past. Two of the droids featured in the attraction’s queue, G2-9T and G2-4T, have been referred to as “Goose Droids,” and if you take a closer look, you may notice that they have robotic webbed feet and tails. That’s because before the two droids at Disneyland’s Star Tours were working in the droid room, they had a different job that involved more… singing? 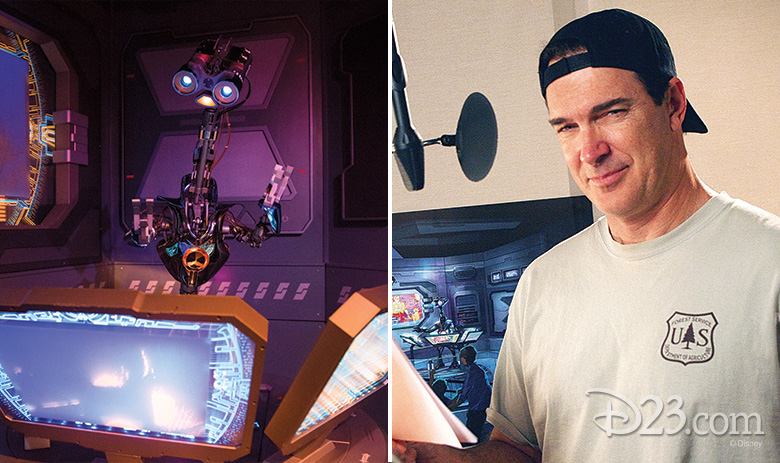 In 1974, Disneyland introduced a musical revue attraction called America Sings to celebrate America’s bicentennial. Throughout the show’s four main acts, a quartet of singing geese sang songs from “I’ve Been Working On the Railroad” to “Singing in the Rain.” But, in 1987, two of those Audio-Animatronics® singing geese took off their feathery costumes and decided to get into the travel business. Now you’ll see the geese scanning guests (voiced by Patrick Warburton, pictured above right—a familiar face to guests who ride Soarin’ Around the World) and checking bags for Star Tours—The Adventures Continue, although one of them still sings a familiar tune every once and a while. Keep your ears open while G2-9T scans your bags, because you may hear him sing, “I’ve been lookin’ at the saaaame bag, alllll the live long day!”

Sharp Eyes Will Spot These Ears
As you are standing in line for Star Tours—The Adventures Continue, you can watch silhouettes of various Star Tours workers and customers pass by a lighted window. Keep your eyes open for an astromech droid who rolls by the window, because when he stops and opens both his satellite dishes over his head, his outline forms the shape of a certain famous mouse! And make sure to look around the rest of the droid room as well, because in Disneyland and Walt Disney World’s versions of Star Tours, you can spot a smaller robot who casts another shadow with a famous set of round ears. 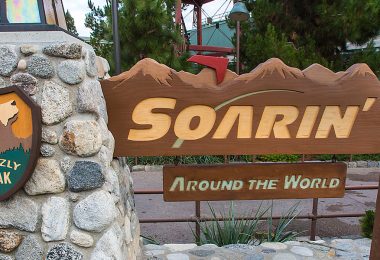 3 Disney Easter Eggs in Soarin’ Around the World