This story is excerpted from a piece originally published in the Fall 2009 issue of Disney twenty-three. If you like what you read, become a D23 Gold Member to receive the Disney twenty-three quarterly publication for more fascinating stories about all the worlds of Disney.

To this day, more than four decades after first opening its heavy wood doors to reveal the macabre mysteries lurking within, stepping from the cheery sunlight of Disneyland into the dark, shadowy world of the Haunted Mansion remains one of Disneyland’s creepiest—and most delightful—experiences. Before your eyes can adjust to the almost palpable darkness—do they ever?—a pale parade of ghostly spectacles begins to unfold with, um, frightening regularity. Hundreds of carefree haunts dance to their hearts’ delights, paintings stretch surreally before your amazed eyes to help disclose hair-raising tales of untimely deaths, and the ramblings of a beautiful woman’s severed head still induce goose bumps. Even now boarding a doom buggy is one of my greatest pleasures; disembarking and taking my leave of this faded home and its ghoulish inhabitants—if only temporarily—still deflates.

The first and best stop for any research into Disney history has to be the Walt Disney Archives on the Studio lot in Burbank. Leafing carefully through precious pages of story development meetings in the collection, I come across a sketch of a portrait of a man holding a cat on his lap. It looks creepy even in its simplicity. A few handwritten lines beside it explain what his story was to be and indicate that his portrait would hang in the Mansion beside an old-fashioned canopy bed:

“Mr. Meaker was a very simple man who lost each of his five wives in a very tragic manner,” it reads. “They died in bed—apparently of natural causes. Mr. Meaker’s only compensation was that his wives were all insured. He smothered them with affection…”

At this point, the guide demonstrates that by a twist of a lever, the canopy of the bed descends slowly, silently, to smother anyone lying beneath. “One night he was testing the mechanism while his cat was sleeping on the bed,” the note continues. “When Mr. Meaker found out he had killed his pet, he was heartbroken. He hanged himself.”

This rang a (requiem) bell for me: The murderous canopy bed was likely inspired by a similar device seen in the low-budget horror film 13 Ghosts, produced by William Castle in 1960. When several years ago, I had the rare opportunity to sit down to lunch with Imagineering Legend Rolly Crump, one of the earliest guys to work on the Mansion, I was just polite enough to let him order his food before I graciously grilled him about everything he could tell me about the attraction. He told me that he went to see 13 Ghosts with Walt Disney while searching for inspiration. (Just for a moment, can you imagine that your job is to watch low-budget horror movies with Walt Disney?!) I confidently asked Rolly if the “stretching” door in the hall right before Leota’s séance was inspired by the 1963 film The Haunting, which had a similar effect, but he insisted that was not a film they saw. (One strike for me.)

The Archives’ files also contain several pages of notes and sketches explaining the ghost-trapping system that was used to lure ghosts to the Mansion: Apparently a container of “nectarplasm” (nectar plus ectoplasm) would draw ghosts to it, through the walls. When the ghosts drank it, they turned the same color as the nectarplasm, and were unable to pass through the walls to escape. An interesting idea, but I’m glad the Mansion’s ghosts today are happy haunts—would you want to enter a house with 999 unhappy spirits?

Not all abandoned tales of the Mansion are only to be found buried in the files of the Archives. One afternoon I was invited out to the beautiful San Fernando Valley home of Disney Legend X Atencio, who is best known for writing the lyrics to both “Yo Ho (A Pirate’s Life For Me)” and “Grim Grinning Ghosts.” He told me about a Haunted Mansion story he created that came so close to life that raven-ous visitors to the Mansion can see a ghost of his tale even today.

X’s Haunted Mansion script is dated 1968, one year before the attraction opened—and contains the scenes we are so familiar with today: spooky halls, a spectral séance, a ghostly gathering in the ballroom followed by a graveyard in full phantasmic swing—with one subtle difference. The ghost host, that disembodied presence that guides us through the Mansion, warns us to watch out for the pesky raven wearing an odd little necklace in each scene: “Apparently, the restless spirit of an old nag has taken possession of that poor wretched raven’s mortal being. Be on your guard—it may want to better itself!”

In the final crypt, where the hitchhiking ghosts join us in our Doom Buggies, the Host reveals that he himself is the raven, and will now pick one unlucky visitor to possess and follow home. And in the mirror, we see exactly this: Most of the cars are occupied by the friendly, slightly-silly-slightly-spooky hitchhiking ghosts, but one bears a hideous phantom wearing the same necklace seen on the raven. To this day, riding through the Mansion, you’ll see the raven (without the necklace) in many rooms: by the casket in the conservatory, on the banister of the ballroom, perched behind Leota on a chair, on the tree outside the attic window (you know… the spot where the Doom Buggy turns backwards and your back gets that nice stretch!), and over the final crypt as we exit the graveyard. Whether or not he possesses one of our fellow travelers, though, is something that will always haunt us.

While I was with X, I took a moment to ask him the same question I’d asked Rolly Crump years earlier: Did they find inspiration in the 1963 film The Haunting for the stretching door? “Absolutely,” he said, “but we went on our own, not with Walt.” (Home run!) This confirmed something else Rolly had told me: Different groups of Imagineers worked on different scenes and effects with no knowledge of what the other groups were doing.

There are probably two “best known” trivia facts about the Mansion. The first is that the organ in the ballroom was originally Captain Nemo’s from the movie 20,000 Leagues Under the Sea. (This fact is contractually required to be included in every story about the Mansion, so there.) Second, is that Walt Disney did not want the Haunted Mansion to look rundown on the outside, because nothing at Disneyland should look shabby. “We’ll take care of the outside and let the ghosts take care of the inside,” He famously said. Almost as well-known is that cleaning crews are instructed not to tidy up cobwebs and dust that form naturally on the showpieces inside—the areas that guests travel through are cleaned every night, of course. But right at the beginning, Imagineer and Disney Legend Roger Broggie encountered a problem with one of the crews.

When new attractions open, there is a period where Walt Disney Imagineering keeps control of it, ironing out any little kinks, before officially “turning over the keys” to Disneyland Operations. One night, after Roger worked the nightshift, he and some fellow Imagineers were leaving in the wee hours of the morning, while the custodial help was outside waiting to go in. Roger walked out and said goodnight to them, but they didn’t go into the building. “Is there something wrong?” he asked. One of them said, “Don’t you hear that?” Roger stuck his head back inside the door and could hear Little Leota, on the up ramp at the end of the ride, her voice carrying through the whole silent building calling, “Hurry back… ” That particular projector wasn’t on show power, so it didn’t go off when the power was shut down. The apprehensive cleaning crew would not go into the building until Roger powered it down.

Part of the fun of the Haunted Mansion over the years has always been trying to guess how Madame Leota and other illusions are created. (One hint: no holograms.) Imagineer Kim Irvine followed in the footsteps of both her father-in-law, Dick Irvine, and mother, Imagineer Leota Toombs, who is seen as séance sorceress Madame Leota, and seen and heard as little Leota, the tiny spectre that implores guests to “Hurry back!” as they make their way safely out of the Mansion. In the transcript in the Archives, Kim shares a favorite story of her mom’s on people’s curiosity about the Mansion’s effects:

“People would recognize her because they knew (Madame Leota’s) face so well. They’d ask her for autographs, but my favorite was when she said one little gal ran up to her at Disneyland, a ride operator. And she said, ‘They tell me you’re Madame Leota. I know you are, I can tell by looking at you, you’re her, aren’t you?’ And Mom said, ‘Yes, that’ll be me.’ So [the ride operator] said, ‘I just have to ask one question: Don’t you get tired of sitting under that table with your head in that ball all day?’”

On the final leg of my research, I was granted an interview at WDI with Tom Fitzgerald,

a show designer who was charged with the happy task of updating the Haunted Mansion as part of Disneyland’s 50th anniversary celebration. Tom told me he shared my boyhood obsession growing up wanting to visit Disneyland. He was 13 years old when he finally made his first visit to Disneyland in December 1969—with one specific goal in mind: the Haunted Mansion. As soon as he made it through the turnstiles, he laughingly recalls, he took off running down Main Street, U.S.A. His parents knew, too, where his obsession was leading him: As he exited the Haunted Mansion, they were there waiting for him, arms folded. They didn’t know then that their son’s apparent obsession with the Mansion would lead him to a career, first as attraction lead at the Mansion in Walt Disney World, and later as a show designer for WDI, charged with the happy task of updating the attraction.

Tom felt that as long as they didn’t tamper with the “DNA of the attraction”—that is, as long as changes fit in with the Mansion’s feel and history, fans would accept them. For example, one change was that, for the first time, Leota’s crystal ball would levitate and float around the séance room. While new technologies allowed this illusion to come to life, it was actually inspired by an old piece of Collin Campbell art of Leota from the Story and Song of the Haunted Mansion album that Tom had had since he was a kid.

“It’s tricky when you enhance the classics,” Tom says. “We wanted to keep up Walt’s tradition of constantly plussing the attractions, while respecting and honoring their traditions. New technologies change the way we can create illusions, and the magic needs to keep pace with the world. That way the classics will remain classics forever.”

Available until November 6!  Hurry back to DisneyPhotoArchives.com to check out images from the Haunted Mansion and order a print on archival paper or top-quality canvas! 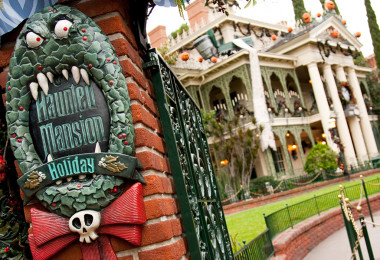 5 Things to Look for in Haunted Mansion Holiday 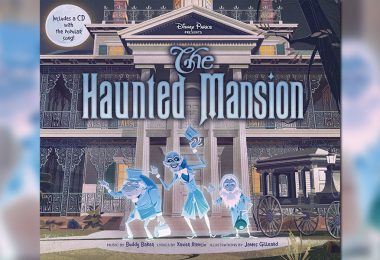 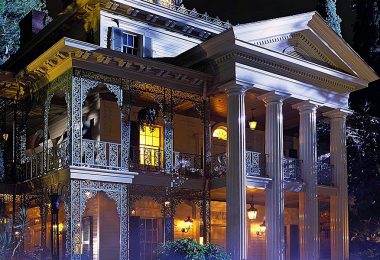