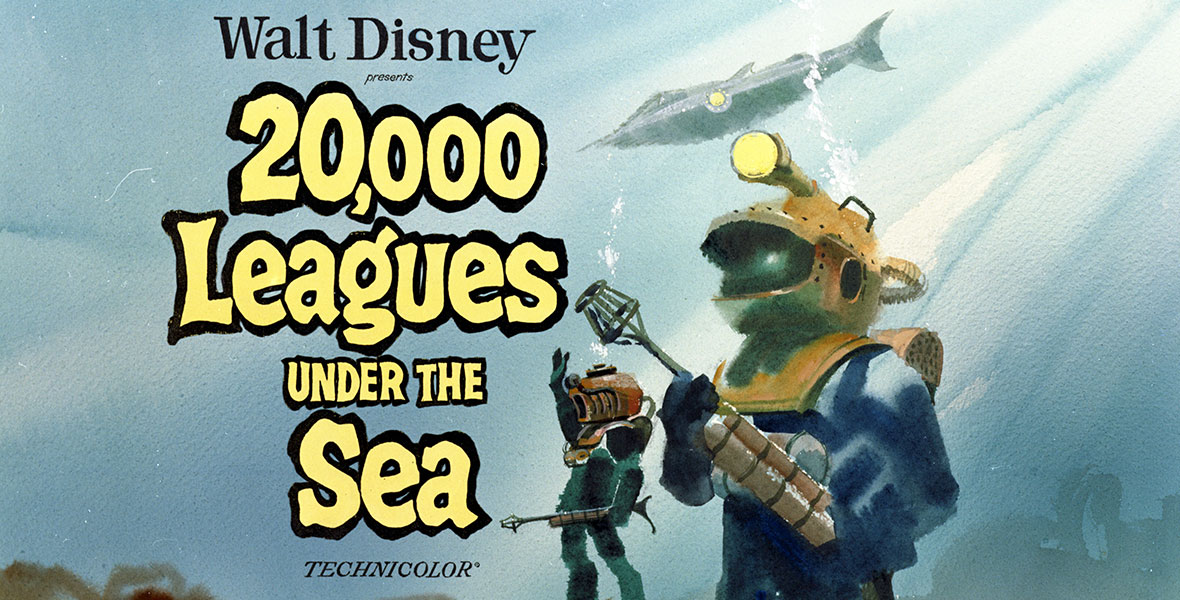 20,000 Leagues Under the Sea (film) In 1868, an armed frigate sent to seek out a fabled destroyer of ships is itself sunk, and three passengers from the frigate—a harpooner, Ned Land, along with a professor who is an expert on the creatures of the sea and his assistant—are rescued. They discover that the “monster” which they searched for is in reality the first man-made submarine, the Nautilus, commanded by Captain Nemo, a madman who is willing to share his secrets of nuclear energy with the world only on his own terms. Land rescues Nemo from the clutches of a giant squid and eventually manages to alert the outside world as to the location of Nemo’s secret island base. Nemo and his creations are destroyed. Released on December 23, 1954. Based on the classic story by Jules Verne. Academy Award winner for Best Special Effects and Best Art Decoration/Set Decoration (John Meehan and Emile Kuri); nominated also for Best Film Editing. 127 min. The first Disney feature filmed in CinemaScope. Disney special effects wizards constructed the giant squid of rubber, steel spring, flexible tubing, glass cloth, Lucite, and plastic, with tentacles measuring 40 feet with two feelers of 50 feet. It could rear up eight feet out of water, its tentacles and feelers moving with frightening realism. It took a staff of 28 men to operate the intricate remote controls. Using hydraulics, electronics, and compressed air, they succeeded in giving a lifelike appearance to the squid. But there were problems. The squid fight had to be filmed a second time after Walt Disney and the director, Richard Fleischer, were unhappy with the initial results. It had been filmed in a special tank on brand-new soundstage 3 at the Disney Studio as if it was sunset on a placid sea; unfortunately this allowed viewers to see too much of the mechanics that enabled the squid to move, and it looked too fake. Instead, the scene was shot a second time, as if it was a stormy night, with 100 backstage workers on hand providing the needed lightning, rain, turbulent seas, and hurricane winds, and everything worked much better. The movie featured the song, “A Whale of a Tale” by Al Hoffman and Norman Gimbel. Director Fleischer was the son of Walt’s early animation rival, Max Fleischer, who created the Out of the Inkwell and Betty Boop cartoons, and Disney made sure that Max did not object before he hired his son. Stars James Mason (Capt. Nemo), Kirk Douglas (Ned Land), Paul Lukas (Prof. Aronnax), Peter Lorre (Conseil). Locations for the film included the Disney and 20th Century-Fox lots in California, and various locales in the Bahamas and Jamaica. The Nautilus was designed by Harper Goff. Reissued in theaters in 1963 and 1971. Released on video in 1980, 1985, and 1992. A television show on the making of the film, Operation Undersea, won the Emmy for best television program of the year. The Nautilus set was displayed for a time at Disneyland.