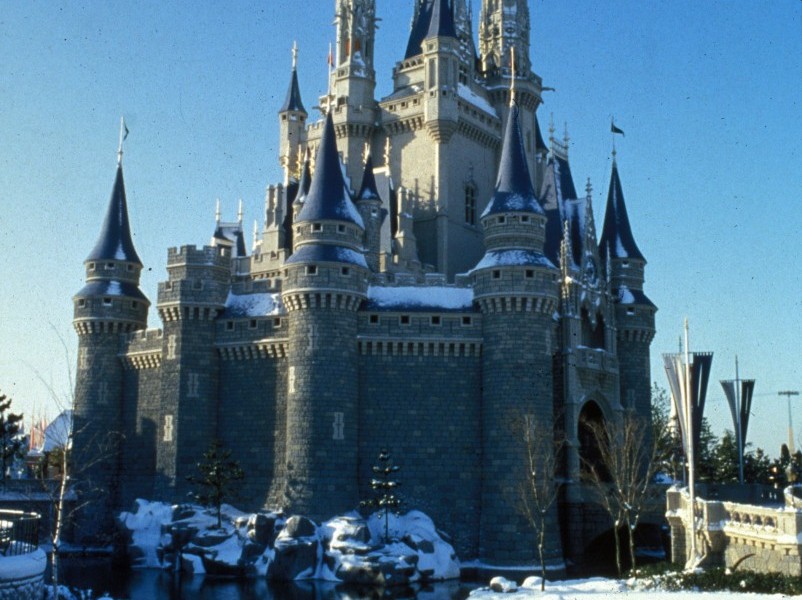 Tokyo Disneyland Park opened on Apr. 15, 1983, in Urayasu, just outside of Tokyo. After the success of the American Disney parks, many different countries made entreaties to Disney about building Disneylands in their countries. It was only after Disneyland park and the Walt Disney World resort were running smoothly that the Disney executives decided to listen to some of the requests. Japan’s request seemed eminently feasible. The Oriental Land Company had some land, reclaimed from Tokyo Bay, which had to be used for a recreational purpose, and there was a huge local population within a 30-mile radius. A Disneyland would be a perfect fit for the site. The Japanese had long been enamored with Disneyland, and when contracts were signed, it was determined that they did not want an Oriental version of Disneyland; they wanted an American park. So, Disney Imagineers worked carefully to design an ideal park for the Japanese site. Because of more inclement weather, the Main Street area was redesigned as World Bazaar, with a roof over it. There was one Audio-Animatronics attraction that dealt with Japanese history, Meet the World. The park had a successful opening and ever since has attracted more than 10 million visitors a year. Over the years, many new attractions, such as Big Thunder Mountain Railway, Star Tours, and Splash Mountain, have been added to encourage repeat visitors. Tokyo Disneyland welcomed its 250 millionth visitor, Mrs. Hisae Do, on Jul. 14, 2000, and its 300 millionth (combined with Tokyo DisneySea), Mrs. Yoko Kusunoki, on November 8, 2002. The 400 millionth guest, Mrs. Aiko Hironaka, visited on Nov. 1, 2006. The 500 millionth guest, was Ms. Megumi Soma, on Aug. 27, 2010, and the 600 millionth guest was Ms. Yumi Sakai, on Apr. 12, 2014. Because of the major earthquake and tsunami in Japan on Mar. 11, 2011, Tokyo Disneyland and Tokyo DisneySea had to close for several weeks beginning March 12, not because of damage but because of problems getting reliable electrical power to the resort. Tokyo Disneyland reopened on Apr. 15. The 700 millionth guest, Sae Tanaka, visited on Jul. 31, 2017.