Home / News / Just For Fun / 10 of Our Favorite Moments from the Marvel Cinematic ...

1. “I am Iron Man.” (Iron Man)
There is perhaps no more iconic moment than when Tony Stark announces to the world “I am Iron Man.” The first Iron Man film kicks off ten years’ worth of stories. At that press conference, the MCU that we love today truly begins.

2. Circle of Heroes (The Avengers)
When Loki takes control of the Tesseract, and the Chitauri army pour through a portal onto the streets of New York, the world needs a group of special people to fight the battles that no one else can. The moment this team—made up of a super soldier, a tech genius, two super-spies, a god, and a raging green monster—first stand together will stand out forever to audiences.

3. Warrior Falls (Black Panther)
T’Challa fights to protect his claim to the throne against M’Baku of the Jabari tribe. Not only is it a memorable moment for T’Challa himself, but audiences are also “marveling” at the traditions and beauty of the country he will do anything to protect.

4. Quill’s Dance Moves (Guardians of the Galaxy)
The moment that Peter Quill dances his way onscreen to the tune of “Come and Get Your Love,” we know that Guardians of the Galaxy is going to be a new kind of Marvel movie. Between using an alien as a microphone and challenging Ronan to a dance-off, Quill’s ability to bust a move sets the tone for the film and gives audiences plenty to laugh at.

5. Vision and the Hammer (Avengers: Age of Ultron)
Supposedly, none of the Avengers save Thor are worthy of wielding Thor’s mighty hammer Mjolnir. So the moment when Vision—an android created by combining Tony Stark’s AI J.A.R.V.I.S. and the Mind Stone from Loki’s scepter—picks it up is particularly memorable. As Thor says, “If he can wield the Hammer, he can keep the [Infinity] Stone.”

6. Airport Battle (Captain America: Civil War)
We’ve all wondered who would win if the members of the Avengers stood toe-to-toe, and when Captain America and Iron Man disagree on the matter of the Sokovia Accords, it’s time to see just that. The two teams facing off in a German airport give us quite a few stand-out moments: the introduction of Spider-Man to the Marvel Universe, Ant-Man being shot from the end of an arrow, and his “giant” surprise for Team Iron Man.

7. “Teach me.” (Doctor Strange)
As it turns out, there’s a lot that Doctor Stephen Strange doesn’t know about the universe. When he arrives at Kamar-Taj to learn, the Ancient One sends him on a trip through different dimensions where nothing he sees can be explained and certainly isn’t found in any gift shop. There’s only one thing that Strange can say when he falls back into our world – “Teach me.”

8. “Puny God.” (Marvel’s The Avengers)
The Avengers all have great moments during their battle with the Chitauri in New York, but the Hulk has one that definitely stands out. When he comes face to face with Loki, the god of mischief, Hulk effortlessly pounds him into the floor like a ragdoll, calling him a “puny god.”

9. Train Tracks (Ant-Man)
Battles take on outsized proportions in Ant-Man. The battle on Scott Lang’s, a.k.a Ant-Man’s, daughter’s toy train tracks is one example. That’s when Scott knocks the nefarious Darren Cross, a.k.a. Yellowjacket, off the toy train with the “tunnel” building block. Eventually the whole train is derailed when it hits Yellowjacket on the track, after which Ant-Man accidently enlarges Thomas the Tank Engine to hilarious effect.

BONUS
11. Nick Fury Recruits Tony Stark
As far as iconic moments go, it’s hard to beat that heart-stopping end-credit scene in the first Iron Man where Nick Fury tells Tony Stark about the Avengers initiative. Comic book fans everywhere nearly leapt from their seats with the realization that Iron Man was the first of many Super Heroes to come. The MCU started in that moment, forever changing blockbusters as we know them. 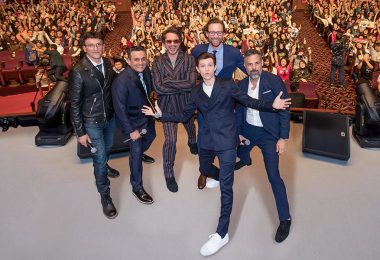 The Cast of Avengers: Infinity War Went on a Fan-Tastic World Tour 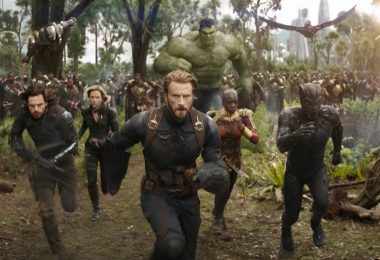 The Road to Avengers: Infinity War as Told by End Credits