Home / News / D23 Exclusive / Behind-The-Scenes of Rogue One: Capturing the Essence of ...

Lucasfilm’s Rogue One: A Star Wars Story blew up box offices around the world this past weekend, just like Luke Skywalker blew up a certain moon-sized battle station. But about that moon-sized battle station: Considering that nearly four decades have passed since Luke’s first Death Star encounter, how did Lucasfilm design the Death Star—along with everything else in its newest film, Rogue One—to fit in with the rest of the films visually, specifically Episode IV: A New Hope? 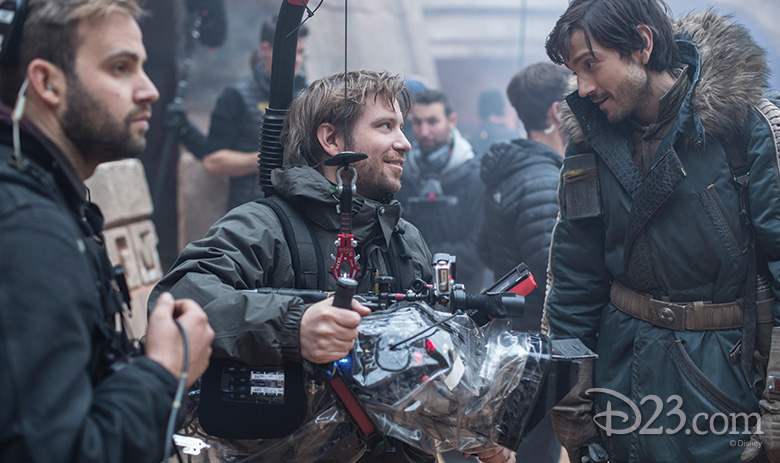 THE VISION OF GARETH EDWARDS
As you know, Rogue One is a standalone film, and from the genesis of the standalone series idea, Lucasfilm felt it was important to the look and feel of these films that the chosen directors be empowered to tell the stories in their own way. When their search led them to Gareth Edwards, whose unique shooting style utilizes intimate, handheld camera work, they knew they had found the director they wanted for Rogue One.

“I love Star Wars,” says Edwards. “I grew up with the original trilogy and to me they’re the ultimate movies. I feel that a massive upside to not being a part of the saga is we have a license to be different. And hopefully we took that license and ran with it.”

“We’re going for realism and naturalness to the environments and performances and characters we meet,” he continues. “It’s also that we’re part of the original films in terms of where our characters are. It had to marry to the films I grew up with. And, there’s a classical style to those, which is very considered and stable. We were also excited about doing something more organic and more opportunistic that felt more real and immediate.”

Producer Simon Emanuel says, “Gareth is all about intimacy and realism. He has a very documentary-led style, where he really wants the audience to be in there, but equally one of the things that was important to Gareth was that you should be able to watch Rogue One and then go straight into A New Hope. Aesthetically it should feel the same; it shouldn’t jar.” 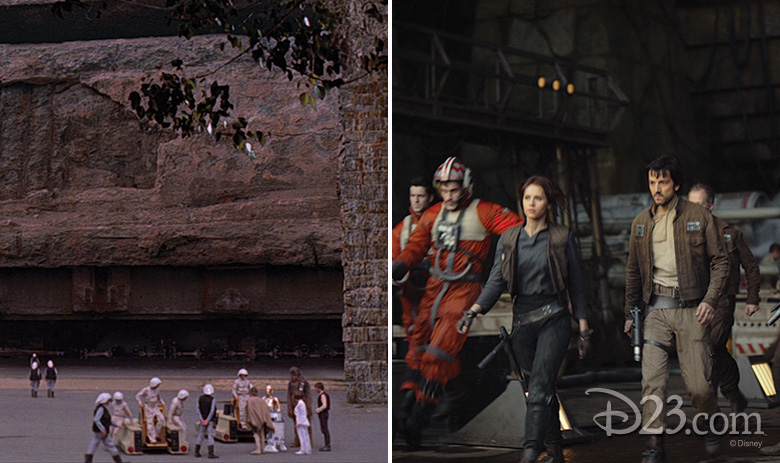 YAVIN 4 – THE REBEL BASE
One set familiar to fans will be the rebel base on Yavin 4, first seen in A New Hope. But whereas, for budgetary reasons, Lucas was only able to build a part of the rebel base, relying on a matte painting to give the illusion of size, the Rogue One production was able to go all-out on its construction. Furthermore, the team was able to revisit the exact location of the original Yavin 4 set, Cardington Airfield, in the county of Bedfordshire. Cardington Airfield was originally built to build airships, with a history dating back to 1915. The enormous 800-foot-long and equally wide hangars (with a roof height of similar dimensions) offered Chiang and Lamont the opportunity to really build Yavin 4 to scale. 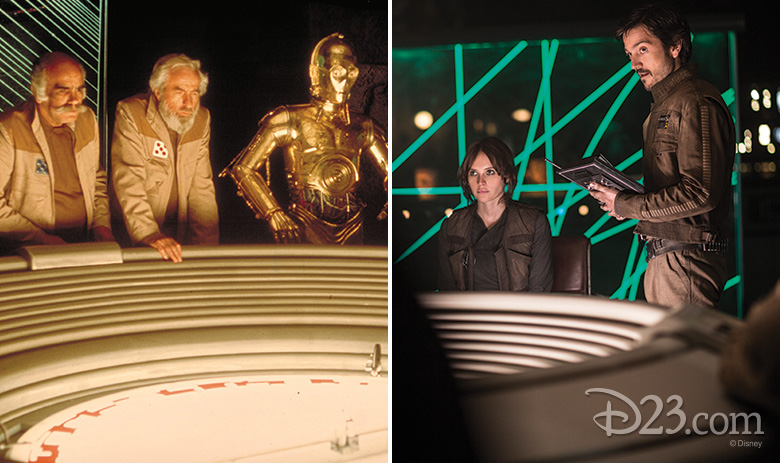 THE BRIEFING TABLE
Taking center stage in the bunker is the Yavin briefing table—a table painstakingly recreated by Academy Award®-nominated set decorator Lee Sandales. The table first appears in A New Hope but unfortunately there were no drawings or blueprints to assist with the recreation. So Sandales and art director Lydia Fry had to resort to a detailed study of photography and film footage.

Sandales describes the process: “We set about doing a forensic study of the table, down to millimeters. It took about four to six weeks of drawings to get the table right. We used production photos of Carrie Fisher standing next to the table to get the height and to work out the scaling of the ribs on the inside of the table and also to work out how many ribs there were.” The same applied to the screens behind the table. He adds: “We couldn’t work out the graphics, so Lydia forensically went through working out each of the graphics so they exactly match A New Hope.” 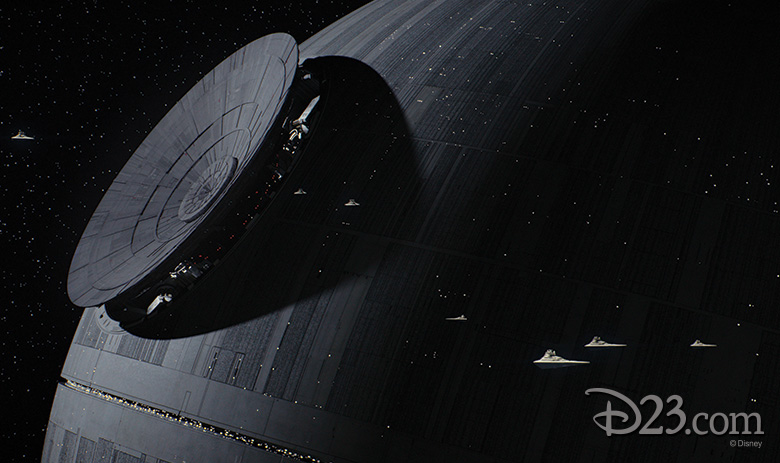 THE DEATH STAR SET
One set that needs very little introduction is the Death Star. However, for art director Alex Baily, who was charged with its recreation, there was very little information to go on.

“We worked out the size from working out the size of one wall panel and just going from photographs,” Baily explains. “The original set was just cobbled together and they only built the screen and one wall. Then when the day came to film on it, George Lucas decided he couldn’t cover the scene with such a small set and so over lunch they built the rest of it!” After weeks of careful research and forensic examination of photographs, Baily and the team recreated the full set measuring 58 feet in width by 21 feet in height.

One new addition or change to how the set originally looked was the use of a giant LED display screen. Rear projection was used in A New Hope and the filmmakers in Rogue One were planning to use blue screen but at the eleventh hour discovered the existence of a state-of-the-art LED display. This meant that the visual effects team could provide live, in-camera footage to run outside the iconic Death Star window while the cameras were turning. 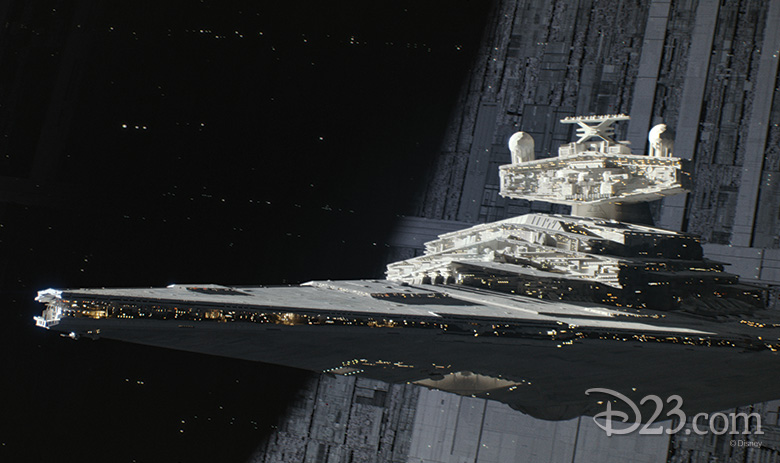 THE SHIP MODELS
Executive producer John Knoll, a longtime Industrial Light & Magic effects supervisor, created a 21st century alternative to an art form created by Lucas and his team nearly 40 years previously. “An important part of the original Star Wars films was the way miniatures were built,” says Knoll. “The Millennium Falcon, the Death Star and Star Destroyers were all made by ‘kit bashing.’” This simply involved breaking down multiple off-the-shelf plastic kits that were intended to produce small replicas of aircraft, ships, and vehicles, and stripping these kits of their component parts, which would then be repurposed to create these phenomenally detailed models. The idea was simple, but the process took hours and hours, involving thousands of kit elements.

Knoll explains, “They used tiny pieces of model kits for artillery, tanks, and race car engines and then fixed them onto a Star Wars model. Since we’re going to be building a great many assets of various kinds, spaceships, etc., we wanted to make a digital version of the model kit library so we could take a similar process and hopefully the aesthetic would be the same across the films.” 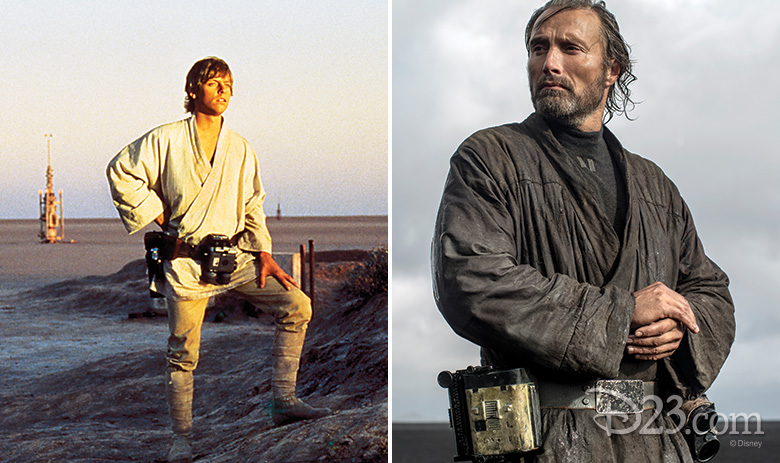 COSTUMES
For costume designers Glyn Dillon and David Crossman, it was a “dream come true” to work on a standalone film that was so connected to A New Hope, the first of the trilogy of Star Wars films that they grew up with and loved.

Although they were faithful to the original designs, the costume designers took Edwards’ mandate and added more realism and detail to the Rogue One costumes. “It was very important to us to keep the original aesthetic of the film,” says Crossman. “We wouldn’t want to alter it; it’s just about enhancing and making certain improvements.”

Dillon adds, “We wanted the costumes to feel real. They’re worn by real people and have a real purpose.” One example is the costuming for the pilots. Instead of an orange boilersuit, they now have a proper flight suit. This realism also extended to the flak vests and helmets as well.

For Diego Luna, who plays the rebel fighter Cassian Andor, finding out the rules about costumes in the Star Wars universe was an experience unto itself. “For example,” Luna says, “buttons aren’t allowed in Star Wars. You don’t think about it, but then no one has a button. How do you attach stuff? It’s a mystery.”

To create the look of Galen Erso, played by Mads Mikkelsen, Edwards asked Crossman and Dillon to look at A New Hope and the character of Luke when audiences first meet him while he is working on his uncle’s farm. Dillon explains, “We first meet Galen at the very beginning of the film and Gareth wanted him to feel like this was a cool Star Wars land. He wanted everyone seeing the film to immediately feel that they are in a Star Wars that they love and they know.

So Gareth said, “Look at Luke’s costume and do a darker version of that.” It’s similar from the point of view of farming and the homestead and the Star Wars mythology. So, in the end, Mads ended up with a silhouette similar to Luke’s but with a quilted crossover jacket in darker tones, as we didn’t want to replicate it exactly. 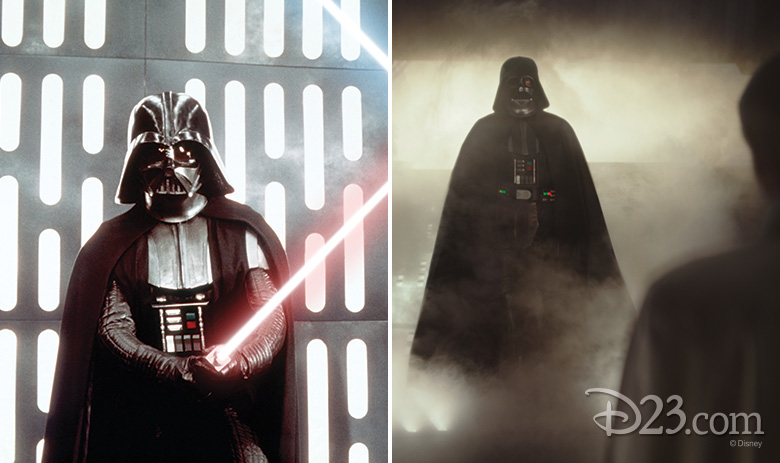 DARTH VADER
The task of recreating the most famous movie villain of all time sounds easier said than done. After all, Darth Vader is one of the most recognizable figures in contemporary film history across the globe. However, for Dillon and Crossman, the task wasn’t as straightforward as one would first imagine. Dillon explains: “There’s more than one look for Vader in the original films because in each film, his helmet or something on him would change. The hardcore fans will know there are the New Hope helmets and the Empire helmets, and they’re slightly different.”

As it turns out, the helmet worn by Vader in The Empire Strikes Back is shinier than its predecessor, but after much discussion Edwards decided that he preferred the less shiny version as first appears in A New Hope. Crossman says, “There are also differences in the neck cowl and if you look closely at Vader’s face in A New Hope you will see a slight C-shaped scar. So, we’ve kept the scar and tidied up the pipes a bit on his face.”

The rest of the costume Crossman describes as “quite a faithful reproduction” with the boxes on Vader’s belt matching exactly those in A New Hope, even down to the little scratches. And the chest box is again painted wood with buttons on it. 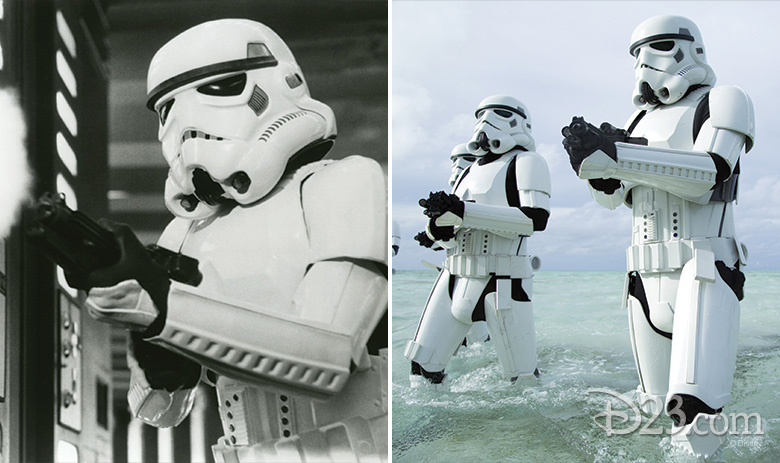 STORMTROOPERS
“If you look closely at the stormtroopers [of the original 1977 film] you will see they used stickers for detail. That wouldn’t work today,” explains Crossman. “So, we’ve made the helmets and costumes as fans remember them but we’ve used three-dimensional vents and detail. You won’t notice the difference unless you know.”

But the costume designers were also keen to keep the authenticity of the original helmets. “When we redid the stormtrooper helmet we made and sculpted it in a computer, but based on a scan of the original,” Dillon explains. “And then we noticed the helmet had quite a big squint because originally they were made out of clay and you’re not going to get it perfectly symmetrical. So we tidied it up a bit on the computer, but still kept that slight squint as we wanted to honor that organic feel.”

The beauty of Rogue One: A Star Wars Story is that it fits perfectly within the visual look and feel of the existing Star Wars universe—especially A New Hope—while at the same time being a wholly original film with a singular vision. Fans get to return to the universe they know and love, while also experiencing brand-new characters and worlds in a galaxy far, far away. 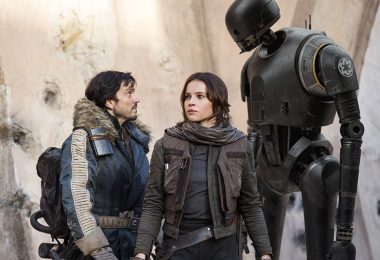 7 Things You Need To Know Before You See Rogue One 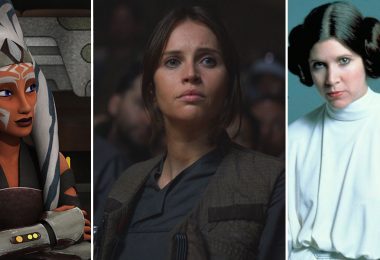 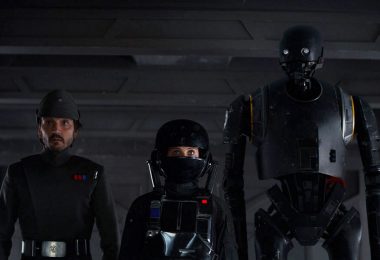