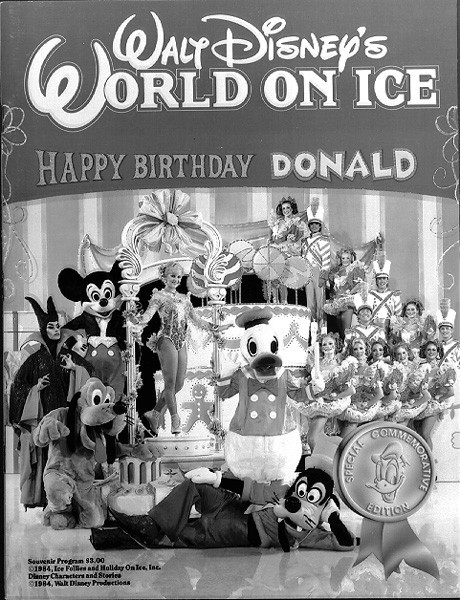 World on Ice The first edition of Walt Disney’s World on Ice premiered in an arena in East Rutherford, New Jersey, on July 14, 1981. The show was produced by Ringling Bros. and Barnum & Bailey Combined Shows, Inc. (Irvin and Kenneth Feld), and combined the Disney characters and stories and the best in musical theater with championship skating, touring 20 major markets in the United States. Spotlighted in the first show was skater Linda Fratianne. Each year since 1981, a new touring live ice show has been mounted, usually tied to a specific Disney theme or movie, such as Peter Pan, Beauty and the Beast, Aladdin, Mickey Mouse’s Diamond Jubilee, and Snow White and the Seven Dwarfs. Walt Disney’s World on Ice became international in 1986, performing first in Japan. In 1994, there were seven productions touring on six continents simultaneously, including dual companies of both Beauty and the Beast and Aladdin because of their unprecedented popularity. Annual attendance numbers upward of ten million people worldwide. Through 1985, the shows were also called Walt Disney’s Magic Kingdom on Ice and Walt Disney’s Great Ice Odyssey. In 1996 the show title became Disney on Ice. (In the early 1950s, the Ice Capades had mounted Disney-themed segments in their shows, and it was in fact from the Ice Capades that Walt Disney had borrowed Disney character costumes to use for the opening of Disneyland.)

World of Motion World Owes Me a Living, The