Buzz and Woody. Dory. Merida. Joy and Sadness. They’re some of the most iconic characters in Disney•Pixar (not to mention animation) history, and they’re known the world over. As we celebrate the amazing 30-year history of Pixar Animation Studios, we thought we’d take a moment to praise some of our favorite supporting characters from Pixar’s 16 feature films. 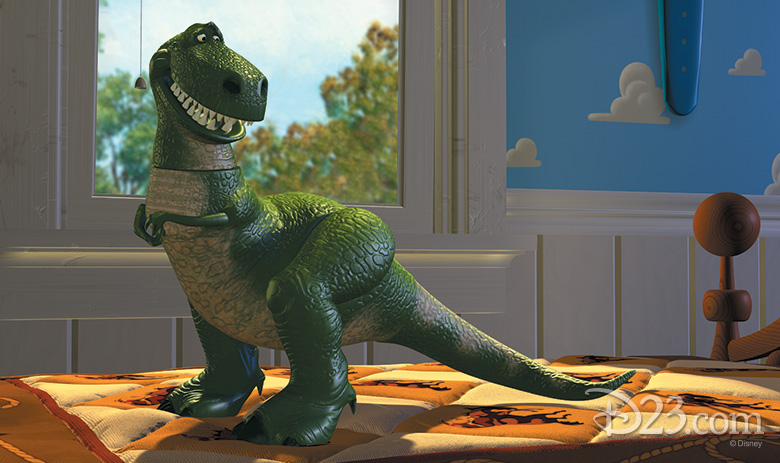 Rex from Toy Story
Sure, he looks ferocious—but this plastic Tyrannosaurus Rex is a professional worrier, with a perpetually upset stomach and a penchant for anxiety. Luckily, with the help of Buzz Lightyear and his other toy pals, he finds his “roar.” 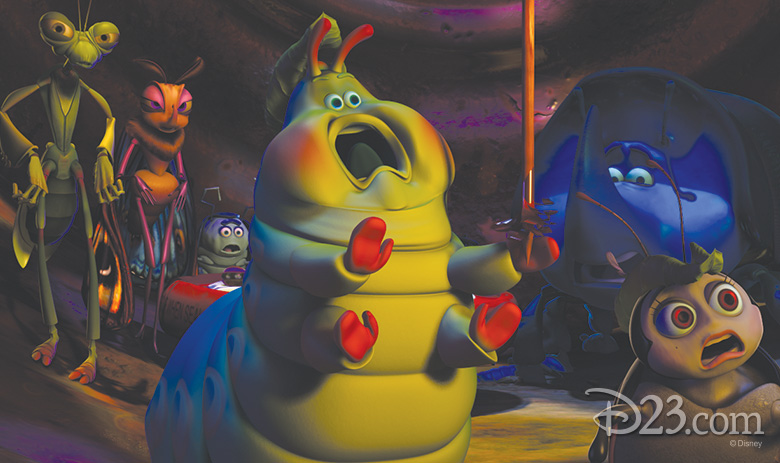 Heimlich from a bug’s life
This adorable little caterpillar was a clown for P.T. Flea’s circus… but let’s be honest, he spends most of his time eating. A brave and true friend, Heimlich ultimately gets his wish and transforms into a butterfly (with very small wings). 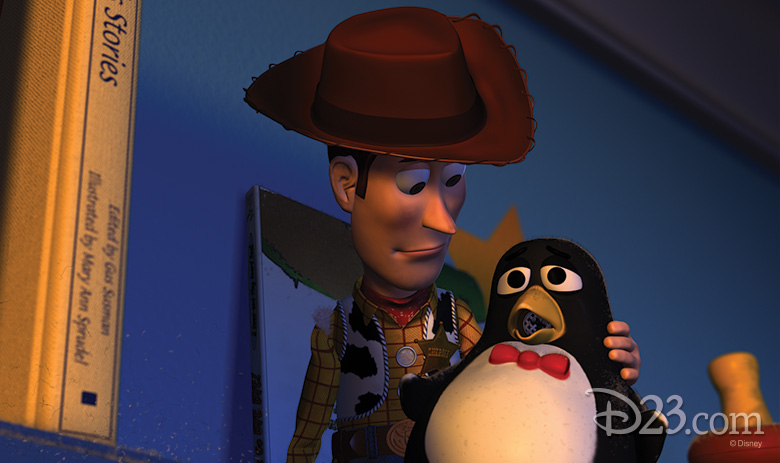 Wheezy from Toy Story 2
Wheezy the Penguin was one of Andy’s favorite toys until his squeaker broke—and after that fateful day, he was relegated to a dusty bedroom shelf. He’s eventually discovered by Woody and is repaired to his former glory, complete with suave singing voice (provided by Robert Goulet). 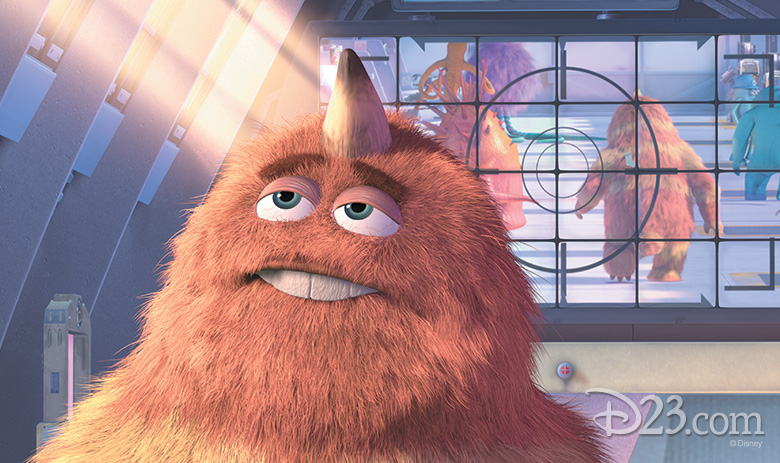 George Sanderson from Monsters, Inc.
One of Mike and Sulley’s best friends on Scarefloor F, George accidentally violates Child Detection Agency’s Code 2319 (“contact with a human child”) and is shaved and scrubbed to remove any evidence of human contact. Later, he finds success on the CDA’s new Laugh Floor… and don’t worry, his fur grows back. 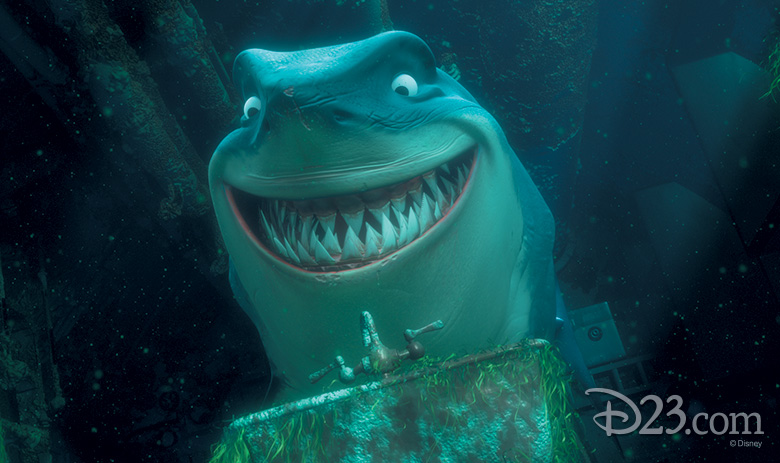 Bruce from Finding Nemo
“Fish are friends, not food!” Bruce the Great White Shark works hard to keep from becoming a “mindless eating machine.” Despite his carnivorous instincts, he’s eventually able to help Dory and Marlin escape an explosive fate. 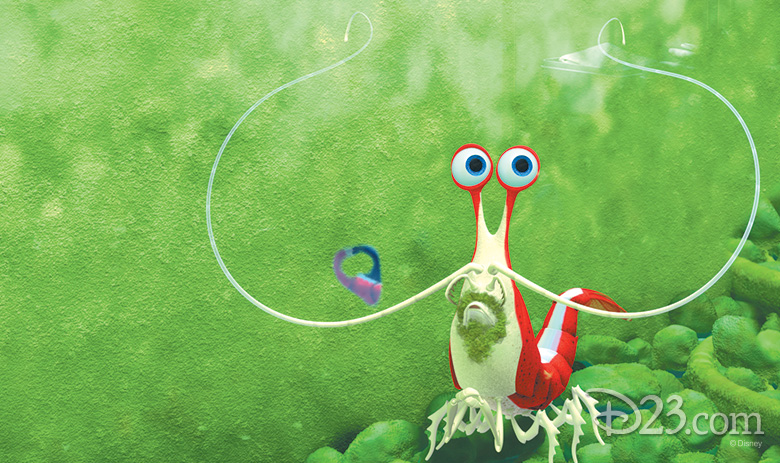 Jacques from Finding Nemo
This little French-accented shrimp is tasked with keeping the dentist’s fish tank clean. He also mans the “Ring of Fire” on Mount Wannahockaloogie. He is a shrimp of few words, but gets along with his fellow tank dwellers. 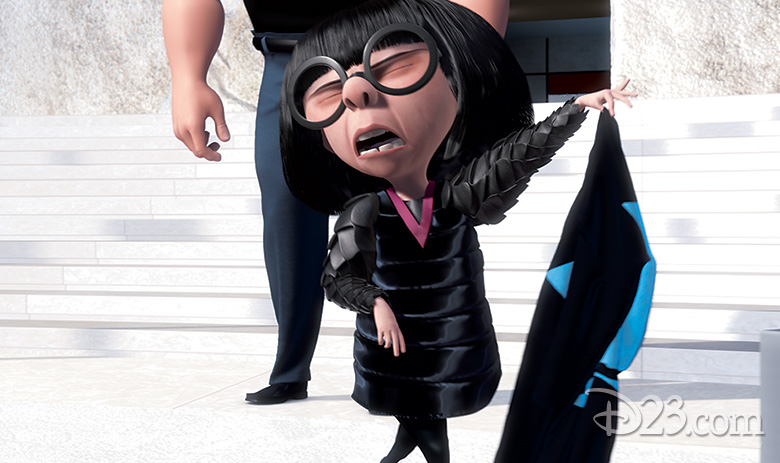 Edna Mode from The Incredibles
“I never look back darling, it distracts from the now.” An icon in her own right, don’t let Edna Mode’s small stature fool you—she’s a force to be reckoned with. Edna is pulled out of retirement to patch up Mr. Incredible’s (Bob Parr) super suit, but being the visionary designer that she is, creates brand new suits for the entire family—sans capes, of course. 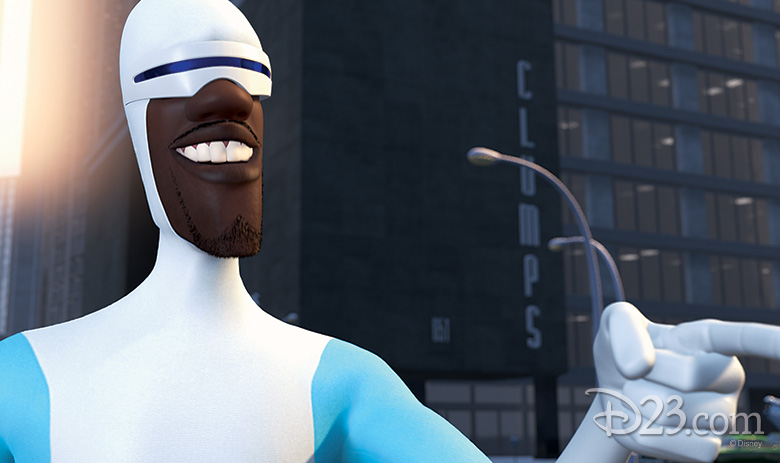 Frozone from The Incredibles
Speaking of super suits, this guy sure has a talent for losing his! Frozone (also known as Lucius Best) is one of Mr. Incredible’s icest—oops—nicest friends with a pretty chill power. Known for skipping out on dates for the “derring-do,” Frozone’s always looking out for the greater good. 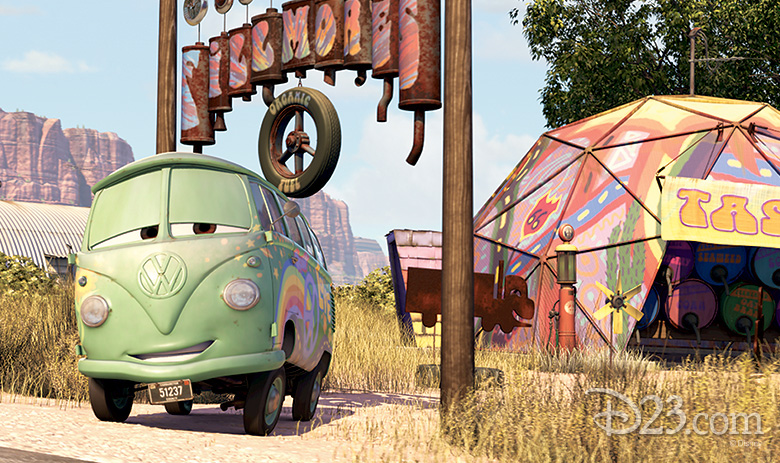 Fillmore from Cars
The resident hippie of Radiator Springs, Fillmore’s all about keeping it natural—much to the dismay of his neighbor, Sarge. This 1960 Volkswagen bus is a big believer in individuality and expresses himself through ‘body’ art and blaring Jimi Hendrix. 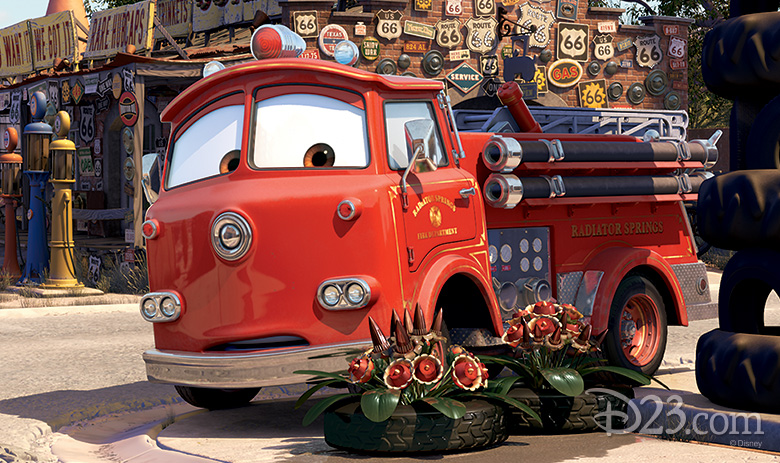 Red from Cars
You might associate fire trucks with blaring engines and bright lights, but Red is proof that you shouldn’t judge a truck by its color. This shy and simple vehicle spends most of his time watering the flowers in Radiator Springs, but tread lightly—this is one emotional engine that has a tendency to burst into tears. 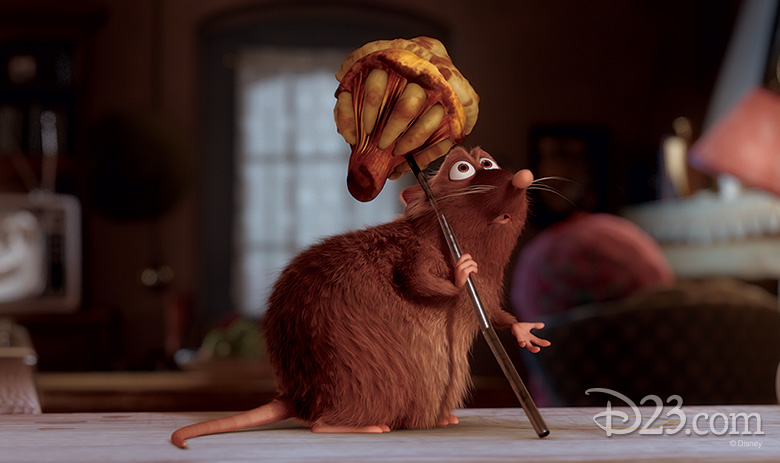 Emile from Ratatouille
We’ve all felt it: the feeling when you’re so hungry, it doesn’t matter what you eat, you just need to eat NOW. Imagine feeling that way all the time and you’ve got our furry friend, Emile. At first, Remy’s older brother doesn’t understand Remy’s devotion to cuisine, but later he helps his brother serve up a delicious dish of ratatouille to the ultimate food critic—and, in turn, learns how to savor the flavors himself. 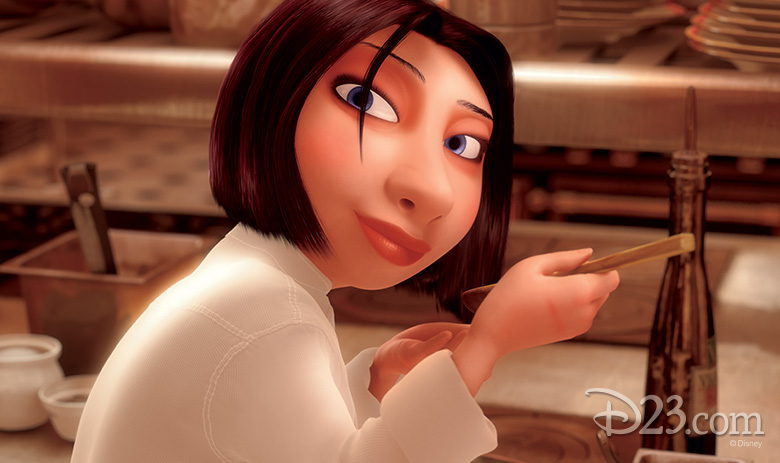 Colette Tatou from Ratatouille
“Oh, symphony of crackle. Only great bread sounds this way.” Being the only female cook in Gusteau’s kitchen is tough enough, but when Chef Skinner appears to take a liking to the newcomer cook, Linguini, no one can blame Colette for getting a little bit upset. This hard-working, assertive, and talented cook soon discovers the truth behind the humble, if not foolish, Linguini and his little friend Remy; remembers Gusteau’s motto, “Anyone can cook”; and decides to help them keep the restaurant from falling into the ownership of the egotistical Chef Skinner. 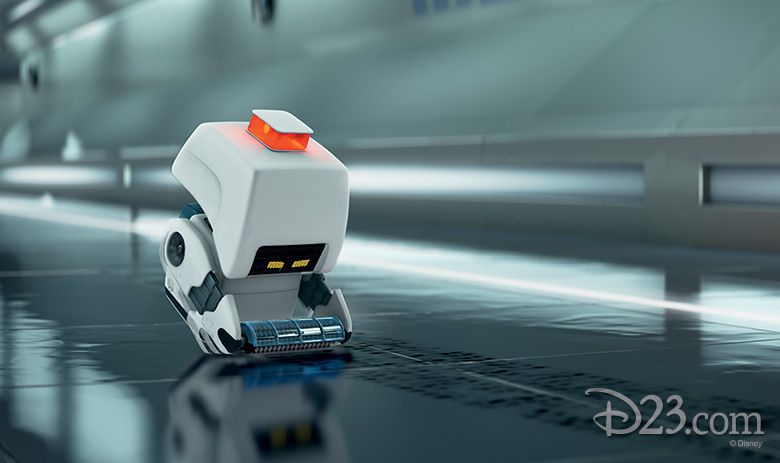 M-O from WALL•E
The adorable cleaner everyone wishes they had for themselves. This diminutive robot (whose name stands for Microbe Obliterator) is programmed to clean anything deemed a foreign contaminant on The Axiom. M-O is obsessed with his goal of keeping the ship clean, even frantically trying to clean his own face after WALL•E teasingly smudges dirt on it. He goes to great lengths to track down and clean WALL•E. Along the way they become friends, and M-O helps WALL•E save the little surviving plant and bring it back to Earth. 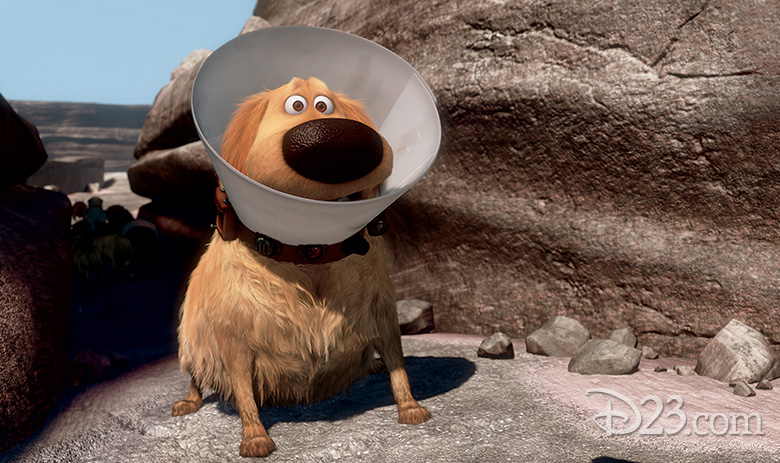 Dug from Up
“My name is Dug. I have just met you, and I love you!” As soon as we met this fun-loving dog, we fell in love. Due to a special collar that translates his thoughts into speech, Dug is able to communicate with basic cute phrases. His owner, Charles Muntz, tasks Dug with finding a large bird—SQUIRREL!—but upon encountering Carl and Russell, Dug decides that he loves Carl and that Carl is his new owner. Dug does his best to help them escape Muntz, even braving the top dog, Alpha, and the dreaded cone of shame! 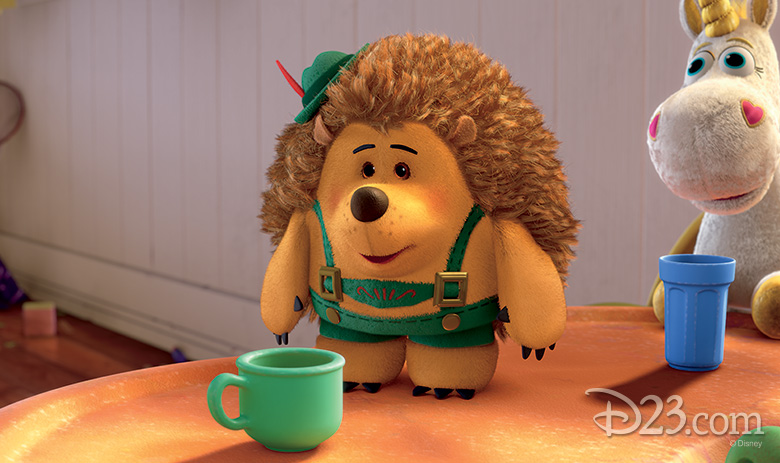 Mr. Pricklepants from Toy Story 3
Ever had a friend who always tried to “play the part”? Well, this charming lederhosen-wearing hedgehog, better known as “Baron Von Shush” by Bonnie’s toys, fancies himself a thespian and is always “trying to stay in character.” He warns Woody about how dangerous Lotso is and helps him get back to Sunnyside Daycare. Mr. Pricklepants may look prickly, but deep down he’s plump and fuzzy. 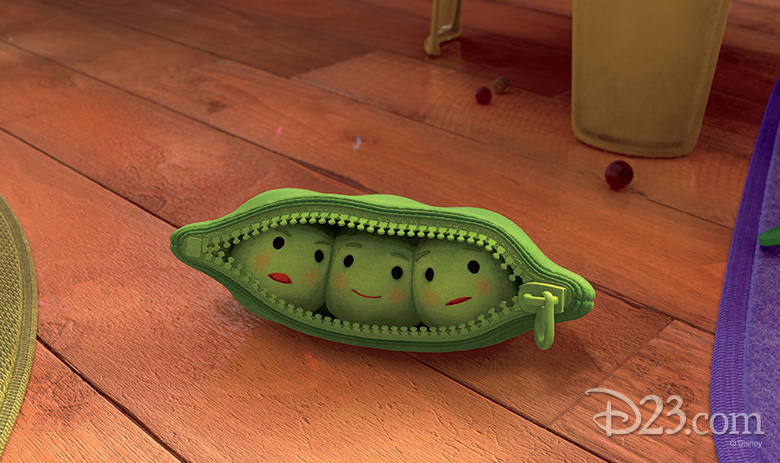 Peas-in-a-Pod from Toy Story 3
Peatey, Peatrice, and Peanelope are the “peafect” trio in Bonnie’s collection. Known for their expertise for identifying real cowboys, this pod of peas pesters the rootinest, tootinest cowboy in the Wild West because he doesn’t have his hat. They are also experts on the whereabouts of Bonnie, especially on details regarding her Hawaiian Vacation. 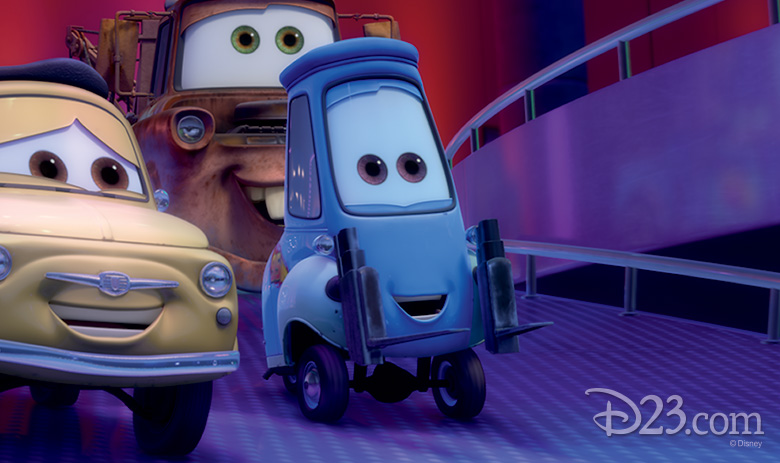 Guido from Cars 2
This little Italian forklift is the backbone for Casa Della Tires. As Luigi’s assistant and best friend, this dynamic duo is the biggest Ferrari-racing fans in Carbueretor County. Despite knowing only a few English words other than “pit stop,” he joins Team Lightning McQueen for the World Grand Prix for his turbo-changed tire changing abilities. His wish of seeing some Ferraris just might come true, too! 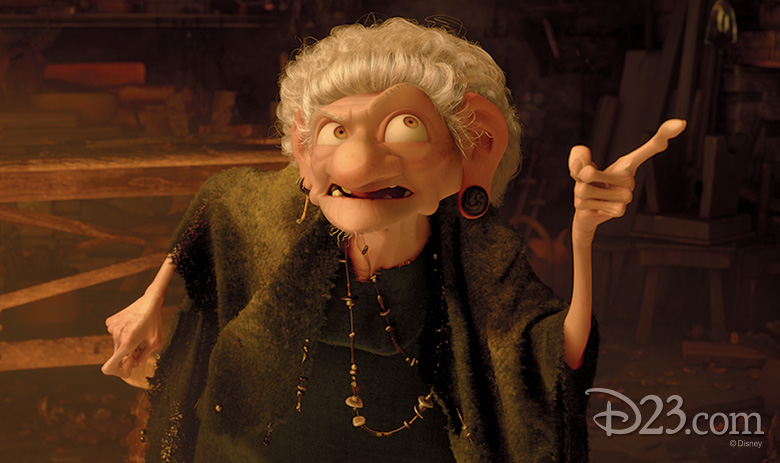 The Witch from Brave
Referred to as the Crafty Wood Carver, this seemingly harmless and eccentric elderly woman specializes in the whittling of wooden bear trinkets, figurines, and curios. However, the brave Merida quickly discovers that this mysterious crone is more than meets the eye. While she might offer a magical solution to change one’s fate, it will more than likely be haphazard and come with an obscure riddle. 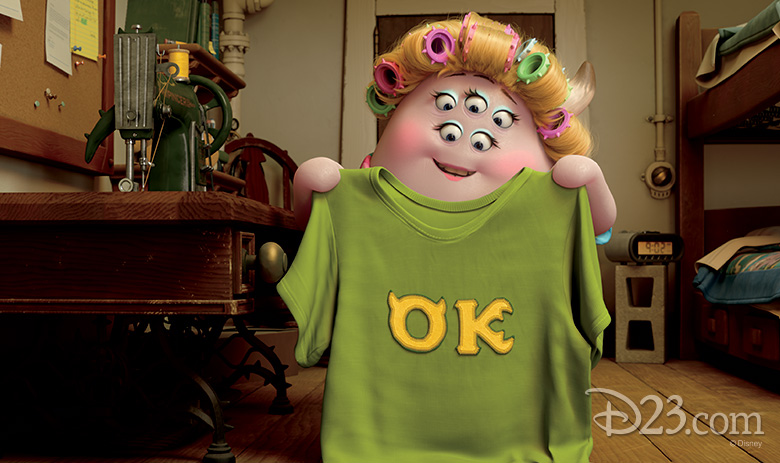 Ms. Sheri Squibbles from Monsters University
Ms. Squibbles is a loving single parent who encourages, accommodates, and, more so, coddles her son, Scott “Squishy” Squibbles. She is the best mom in Monstropolis, as she cooks, does his laundry, and even acts as house mom when he has friends over to play fraternity. A drive with Ms. Squibbles may include listening to her favorite death metal tunes. 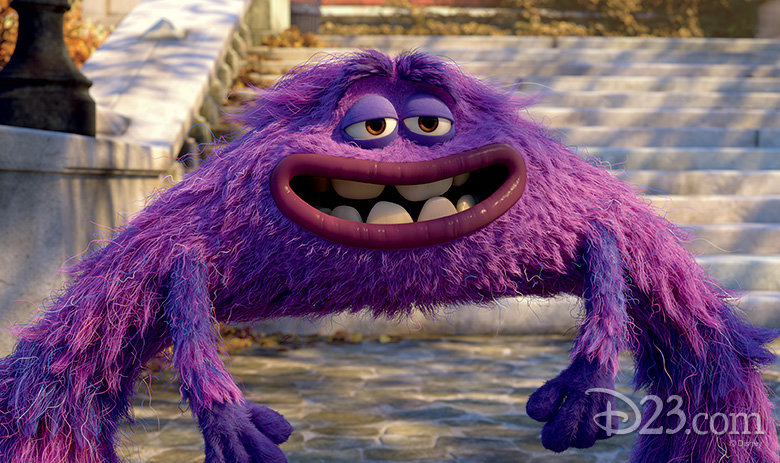 Art from Monsters University
The new-age philosophy major at Monsters University defies arch-etype: he’s a total free spirit, extremely predictable, and as flexible as they come—and we mean that in both the physical and metaphysical sense! 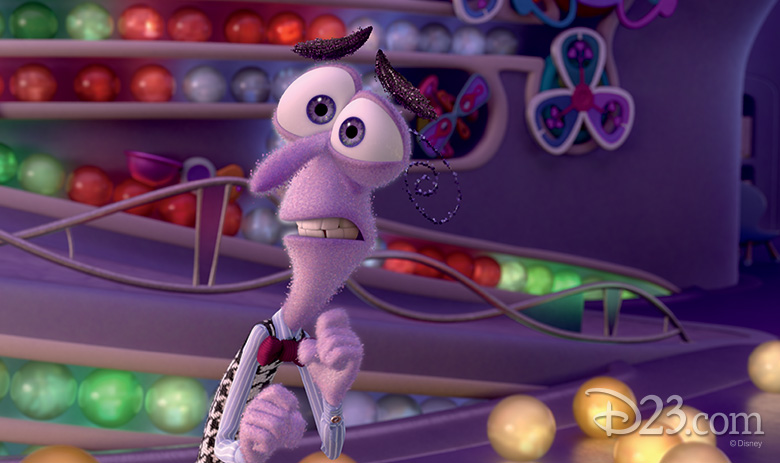 Fear from Inside Out
Something might be said for conquering one’s fears, but the Fear who lives inside Riley’s head in Inside Out is actually a pretty good guy to have around. There’s really nothing that Fear doesn’t find at least a little dangerous, so he’s happy to let Joy control the console most of the time. But it’s nice knowing that he’ll intervene in times of true crisis—like broccoli on a slice of perfectly delicious pizza. 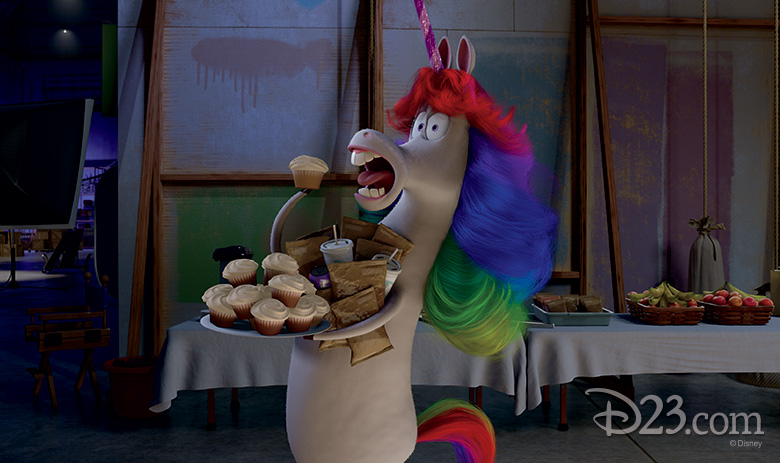 Rainbow Unicorn from Inside Out
Imagine the most fabulous performer you can… A superstar of such magnitude that you might be rendered speechless in her presence… Such is the effect that Rainbow Unicorn has on Joy when she, Sadness, and Bing Bong encounter her in Dream Productions. It’s easy to see why: the rainbow hair, the lavender eyes, the mythic nature of being a unicorn! We’re thinking her epic performance in Fairy Dream Adventure, Part 7 could only be matched by a follow-up to her showdown with Jangles the Clown. 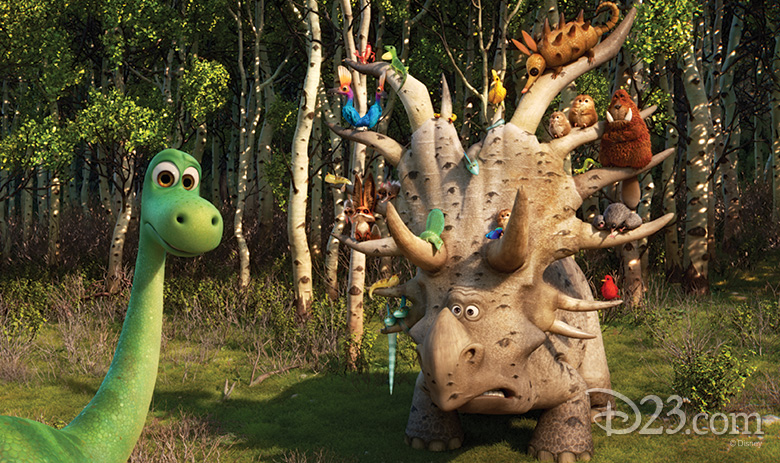 Forrest Woodbush, aka the Pet Collector, from The Good Dinosaur
Some people are dog people, some folks like cats, and some people bring the whole menagerie home with them. The Good Dinosaur’s Forrest Woodbush takes that to a whole other level—literally—keeping his trove of treasured beasts on horns that surround his head. But given that all of his pets are tasked with protecting Forrest Woodbush from dangers and nuisances, like mosquitoes and “unrealistic goals,” we think he might be on to something. He’s disappointed to miss out on adding Spot to his collection, but we’re pulling for him to reunite with favorite pet, songbird Debbie, so that she can warble him through this latest crisis. 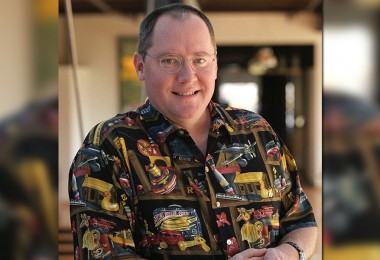 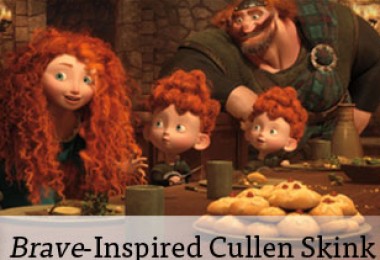