Follow along as Winslow Fegley and crew spend their day at the Happiest Place on Earth, and mark your calendars for Disney Channel Fan Fest… Read more, along with other news from around Disney, in this week’s news briefs!

Based on the best-selling book of the same name, the ultra-adorable Timmy Failure: Mistakes Were Made is now streaming exclusively on Disney+! And to celebrate, it should come as no surprise that the film’s stars—including Kyle Bornheimer, Ophelia Lovibond, Chloe Coleman, Ai-Chan Carrier, Kei, and Timmy Failure himself, Winslow Fegley—recently spent the day at the Disneyland Resort. See all the fun they had for yourself in the video, above.

The cast took in all the sights, sounds, and surprises throughout both parks—visiting Sleeping Beauty’s Castle and the Mad Tea Party at Disneyland park; and Radiator Springs and Pixar Pier inside Disney California Adventure park.

Directed by award-winning filmmaker Tom McCarthy, Timmy Failure: Mistakes Were Made follows the hilarious exploits of our quirky, deadpan hero, Timmy—who, along with his 1,500-pound polar bear partner, Total, operates Total Failure Inc., a Portland detective agency. An elementary school oddball, the clueless but confident Timmy must navigate the world of adults around him, including his overburdened mother (Lovibond) and her well-meaning boyfriend (Bornheimer); his teacher/nemesis (Wallace Shawn); and a school-mandated guidance counselor (Craig Robinson), all in his quest to become the best detective in the world. See it now only on Disney+!

If you’re a longtime reader of D23.com, you know we’ve had the distinct pleasure of joining all our Disney Channel favorites for fun and frolic at Disney Channel Fan Fest—an incredible day of live concert performances, meet-and-greets, and so much more. Well this year, Disney Channel Fan Fest is not only returning to Disneyland Resort on May 9, it’s also going to Walt Disney World Resort for the very first time as part of the Epcot International Flower & Garden Festival! Click here for all the pertinent info… 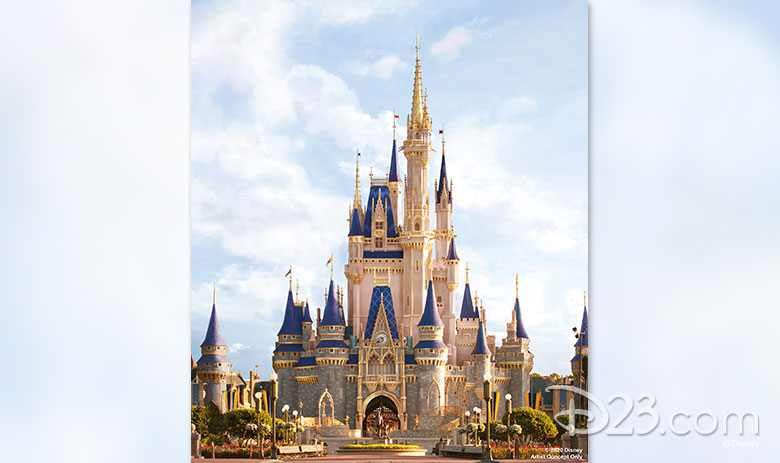 Just in time for the 70th anniversary of the animated classic Cinderella, the princess’ namesake castle at Magic Kingdom park at Walt Disney World Resort is receiving a royal transformation—starting in the coming weeks and continuing throughout the summer. Check out the concept art for the newly enhanced Cinderella Castle, above.

Visiting Walt Disney World soon? Don’t fret—much of your experience will stay the same. During the castle’s transformation, the daytime musical extravaganza Mickey’s Royal Friendship Faire and the nighttime fireworks spectacular Happily Ever After will continue to run as scheduled. Showtimes are subject to change, so do keep your eyes peeled on the Entertainment Schedule, My Disney Experience app, or the Times Guide at Magic Kingdom for the latest. 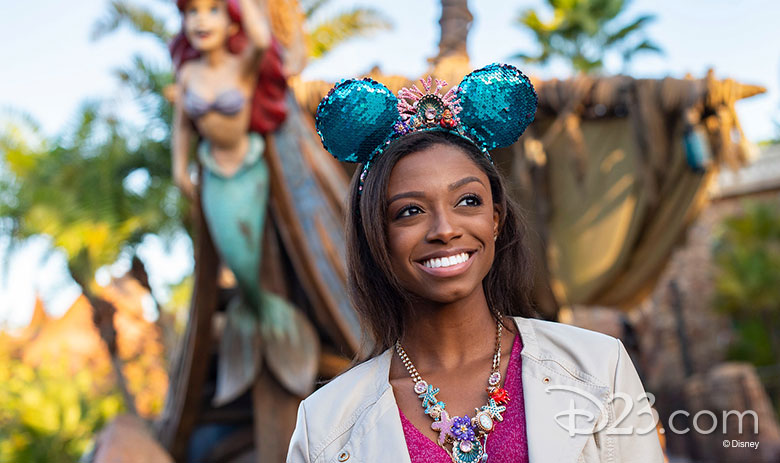 Fashionista fans of Ariel, Sebastian, and Ursula—listen up! There’s a brand-new collection on sale this week, inspired by the iconic animated film The Little Mermaid as filtered through the whimsical mind of designer Betsey Johnson.

From all manner of jewelry in the Disney Parks Collection x Betsey Johnson to an all-new Minnie Mouse ear headband in the Disney Parks Designer Collection (as seen in the photo above), these limited release items are coming to Disneyland Resort and Walt Disney World Resort beginning Friday, February 21, and will be available on shopDisney.com in March. If you’ve ever wanted to show off your love of whozits, whatzits, and thingamabobs in a truly unique way, here’s your chance!

Look for info on even more Disney Parks Designer Collection releases in the coming months, including items from Her Universe in April; the voice of Mickey Mouse himself, Bret Iwan, this summer; and model Karlie Kloss this fall. 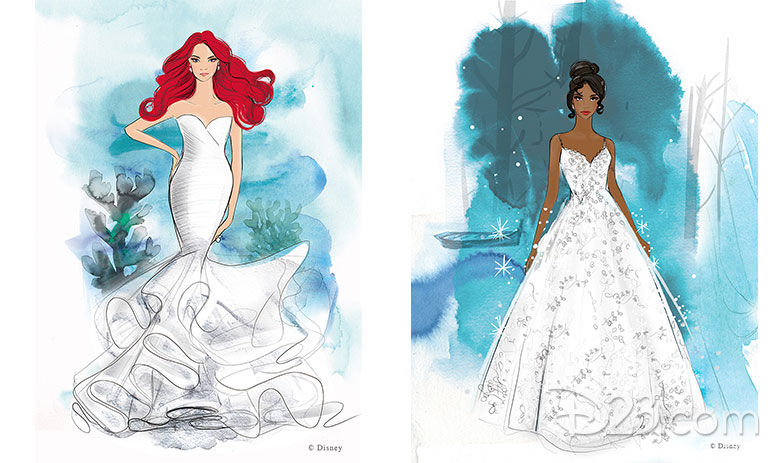 Speaking of Disney-esque designs for fans to look resplendent in: a brand-new collection of wedding gowns, inspired by the style and spirit of Disney Princess characters, are debuting in just a few months’ time.

The new Disney Fairy Tale Weddings Collection from Allure Bridals features 16 gowns inspired by the likes of Ariel, Aurora, Belle, Jasmine, Cinderella, Pocahontas, Rapunzel, Tiana, and Snow White. These gowns will be available at select bridal boutiques across the country; seven of the 16 styles will be featured exclusively at Kleinfeld Bridal stores in New York and Toronto as the Disney Fairy Tale Weddings Platinum Collection. Between both versions of the collection, prices range from $1,200 to $10,000—and all gowns will be available in sizes 0 to 30.

Allure Bridals will unveil the full collection during New York Bridal Fashion Week this April, and gowns will arrive in stores shortly thereafter. If you’re getting married in the near future, and you love all things Disney, this might just be the perfect way to say “yes” to a dress… 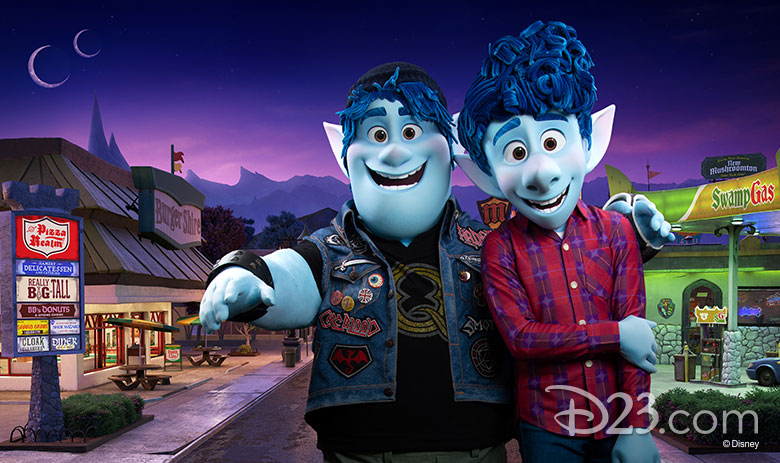 Disney and Pixar’s latest adventure, Onward, gallivants into theaters around the U.S. in just about two weeks—and to celebrate, Disneyland Resort and Hong Kong Disneyland are giving fans the extraordinary opportunity to meet the film’s elf brothers, Ian and Barley Lightfoot, in person!

On Thursday, March 5, Ian and Barley will make their Disney Parks debut as part of the Disneyland After Dark: Pixar Nite special event, and beginning the next day—the same day Onward hits theaters—you’ll be able to meet them daily at Pixar Pier at Disney California Adventure park. Plus, they’ll be making their way to Hong Kong Disneyland soon, to meet guests and then join in the fun with the return of the Pixar Water Play Street Party.

Set in a suburban fantasy world, Onward follows Ian and Barley (voices of Chris Pratt and Tom Holland) as they embark on an epic quest to discover if there is still a little magic left out there. Featuring the voices of Julia Louis-Dreyfus as the brothers’ mom Laurel; Octavia Spencer as The Manticore; Mel Rodriguez as Officer Colt Bronco; Lena Waithe as Officer Specter; and Ali Wong as Officer Gore—and directed by Dan Scanlon (Monsters University)—Onward opens March 6.