Home / News / D23 Exclusive / From Comics to the Screen: How Scrooge McDuck Started ...

Long before we were gathering in front of our television sets to see the hurricane of life in Duckburg, Disney fans would run to comic stores to read about the adventures of their fine feathered friends in the pages of Carl Barks’ iconic Donald Duck comics. While his stories didn’t bear the name DuckTales, over time they evolved into the tales of derring-do and bad and good luck tales that might seem familiar to fans of the Disney Afternoon classic. It all started with the creation of a certain rich uncle… 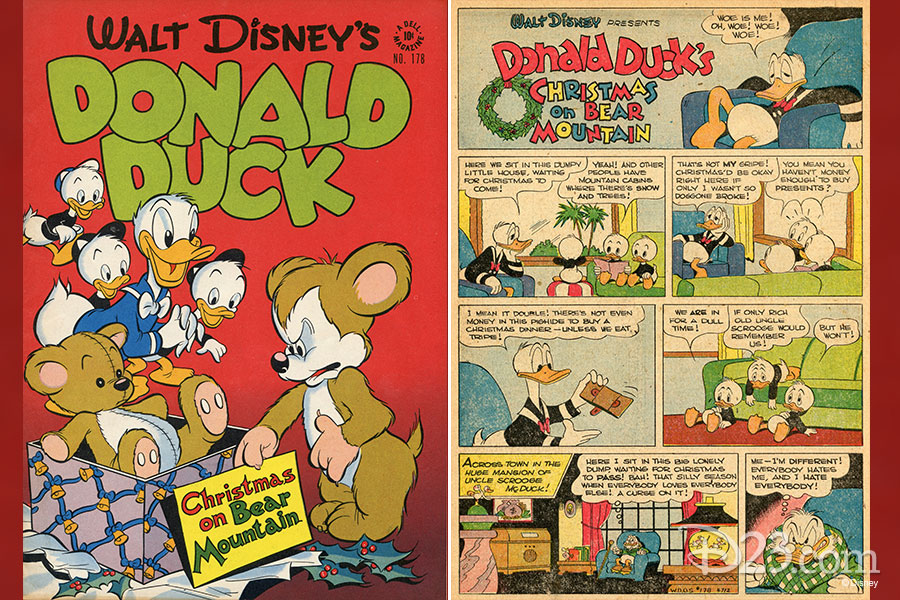 Inspiration from Classic Origins
The now-famous center of all DuckTales adventures, Scrooge McDuck, found his origins in a classic story. While brainstorming ideas for a Christmas story for his Donald Duck comics, Barks looked to beloved Christmas tales for inspiration. He explains, “I began to think of the great Dickens Christmas story about Scrooge. Somehow it is the classic of all Christmas stories. Now, I was just thief enough to steal some of the idea and have a rich uncle for Donald.”

Barks’ story, “Christmas on Bear Mountain,” featured a miserly Scrooge to play opposite Donald, looking and acting very differently than how present-day fans remember. When Scrooge is introduced he is brooding alone in his massive estate, thinking about how much he hates Christmas, proclaiming in his thoughts, “Everybody hates me, and I hate everybody!” Clearly, this rich, old duck has a lot of growing to do! 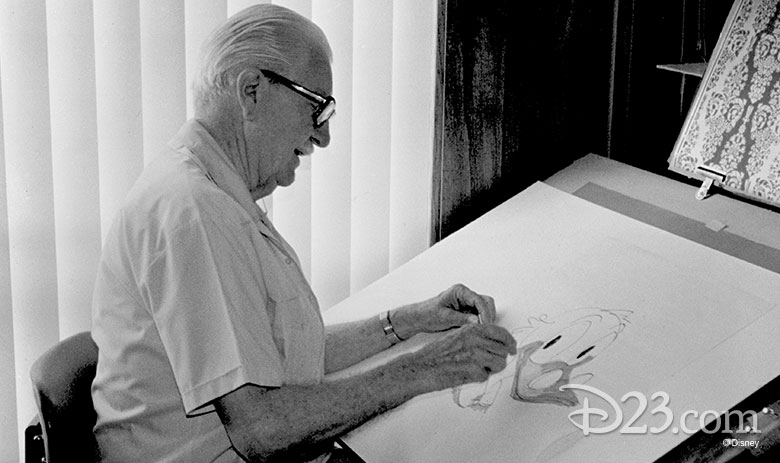 Rich with Popularity
Scrooge’s path as Donald’s bitter opposite soon took a turn when Barks saw potential in one of McDuck’s unique character traits: his wealth. Barks explains that, “[It] generated so many gag situations he was soon upstaging Donald in plot interest. He became popular because the size of his fortune was so ridiculous it didn’t offend readers, the stuff only brought him troubles and troubles.” Fans were entertained by the prospect of this rich uncle of Donald’s having to face all sorts of calamities due to his riches, and soon Scrooge was no longer simply a miserly old man living in his empty manor. In Walt Disney’s Comics (1948), Donald describes Scrooge as “the richest old coot in the world”—a bold title, but one that makes Scrooge the icon he is today.

The Beginnings of an Adventurer
It wasn’t just the riches that captured fans’ hearts—it was the trials and tribulations that came with maintaining such a large fortune. That meant that the old miser brooding around his manor had to actually get up and leave the house. Barks describes the change as, “I made him too old and decrepit. I discovered later on that I was going to have to make him more active; I couldn’t have an old guy like that out doing the things that I had to have him do.” The change made all the difference: Scrooge McDuck, the daring adventurer, was now fully in action. 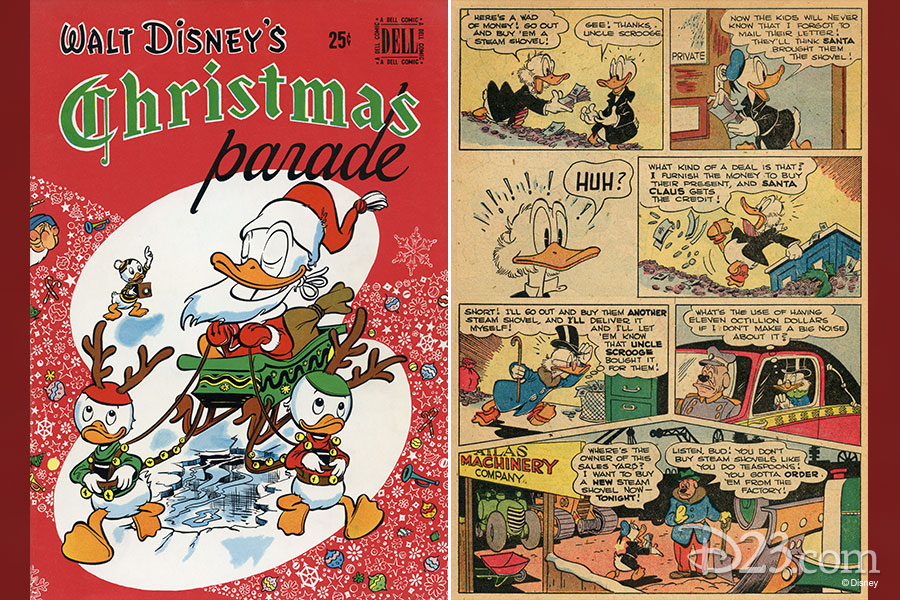 A Familiar Scrooge
It wasn’t until another Christmas tale that we saw the true Scrooge emerge. Christmas Parade No. 1 features a cane-carrying Scrooge, but the cane is more of an accessory than an assistance, as he’s spry and more worried about showing off his piles and piles of money. When pressured by Donald to purchase a steam shovel, he exclaims, “If I could afford a steam shovel, I’d have one in here shoveling the money out of my way!”

In fact, in the comic itself, Scrooge expresses exactly why fans loved him so: “What’s the use of having eleven octillion dollars if I don’t make a big noise about it?” Little did he know how much of a big noise he would soon be making.

Building a Better Duck Tale
So, by now we have the groundwork for DuckTales falling into place: Donald and his nephews, a spry Uncle Scrooge ready to defend his piles of money, and the potential for endless adventures. Now all that’s missing is a couple of key elements, but those were soon to arrive. Barks explains, “I just gradually made him richer and richer, and then I had to develop a place where he could store the money, and all the time there were the Beagle Boys trying to steal it from him. Those things just grew like building brick walls: You just lay one brick on top of another, and finally you’ve got the whole thing built.” Soon, Barks had built all of Duckburg, from Scrooge’s massive money bin to a cast of dastardly villains trying to break into it. 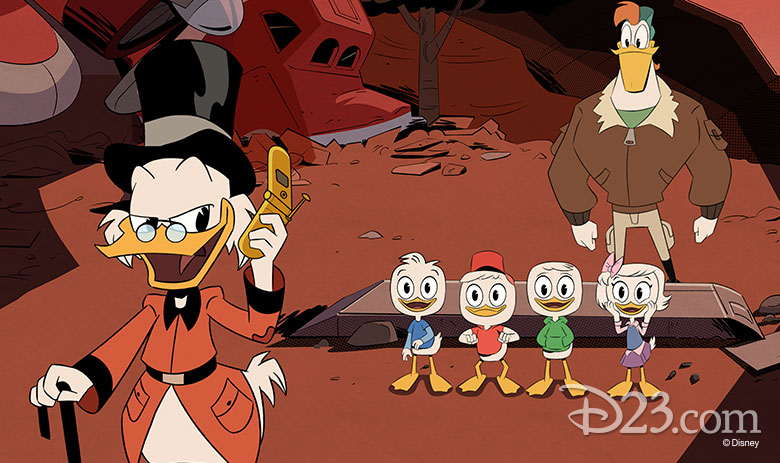 Tales Still to be Told
Undoubtedly, there would be no DuckTales without Carl Barks. When Barks was honored as a Disney Legend, Roy Disney declared, “Carl’s name is synonymous with Disney’s Ducks, and today his stories live on as the basis for the DuckTales series.” From the original comic tales of Scrooge McDuck, to the brand-new DuckTales series on Disney XD, the spirit of Carl Barks’ storytelling lives on. 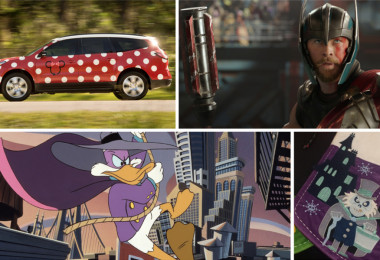 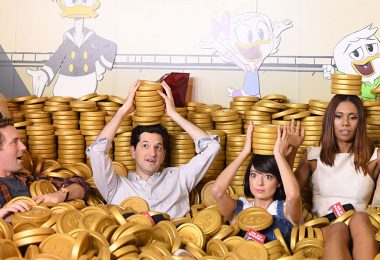 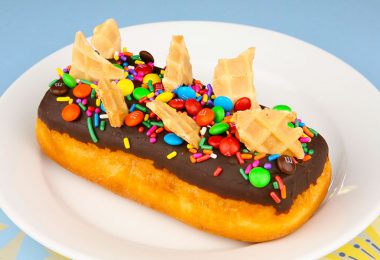