For nearly 60 years, Disney has welcomed visitors from around the world by throwing open the gates to worlds of fantasy and adventure. Beginning in 1955 with Disneyland, an array of Disney theme parks, resorts, and other attractions have marked their grand openings with festive unveilings. A common sight at such events is the ceremonial ribbon cutting; over the years, any number of rides, shows, and celebrations have kicked off their debuts with a pair of oversized scissors and the participation of Disney characters and celebrities—or even Walt himself!

A Disney ribbon cutting is always cause for celebration

So as we here at D23 “cut the ribbon” on a whole new way to experience the treasures of the Disney vault, it seems like a good time to look back at these moments from Disney history. As you can see, no matter the occasion, a Disney ribbon cutting is always cause for celebration.

We’ll start off with the photo above, taken at the dedication of Disneyland’s Opera House and the West Coast debut of Great Moments With Mr. Lincoln in July 1965. Already a smash hit from the New York World’s Fair’s 1964 season, the show continued to play in Flushing Meadows throughout 1965. To bring the show to Disneyland, a duplicate of the attraction was constructed with a new, second-generation refinement of Lincoln’s Audio-Animatronics® figure. 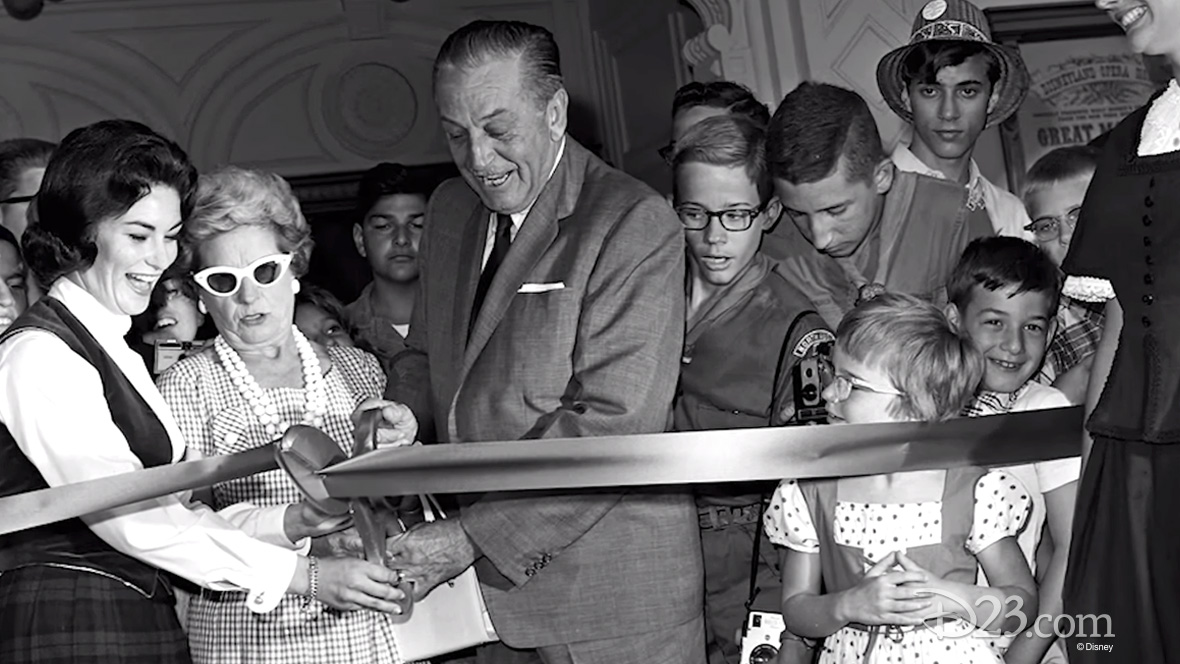 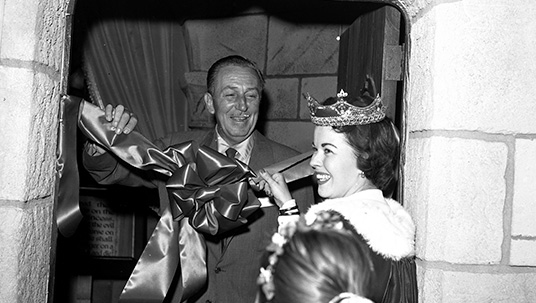 For the festivities, Shirley brought along her daughter Linda and son Charles, seen in the foreground, as well as her daughter Lori. The family spent the day in the park, waving to photographers from Dumbo the Flying Elephant and other attractions. For the rededication ceremony, Shirley appeared in a velvet cape and golden crown, and she read the tale of Sleeping Beauty to the assembled crowd.

This wasn’t Shirley’s first brush with Disney royalty, of course. Nearly 20 years prior, she had presented a special Academy Award®—complete with seven miniature Oscar® figurines—to Walt for his groundbreaking animated feature Snow White and the Seven Dwarfs.

Walt wasn’t the only Disney to get in on the tradition of Disneyland ribbon cuttings. Here we see Walt with three of his grandchildren—Tammy, Joanna, and Chris Miller—as well as a family of friendly Audio-Animatronics® beavers. With their trusty wilderness hatchet they’re dedicating Disneyland’s new Mine Train Through Nature’s Wonderland attraction in May 1960. 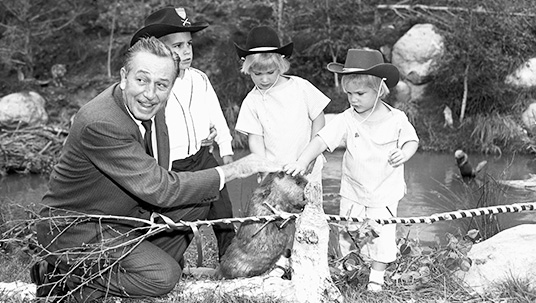 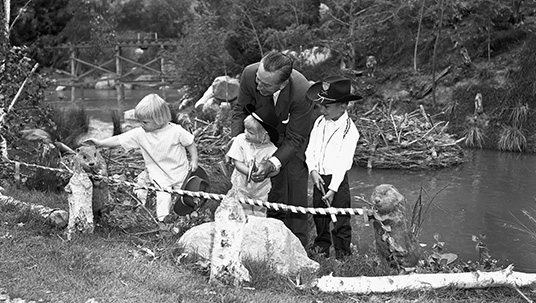 One of the park’s first major expansions, the new area was an improved version of the earlier Rainbow Caverns Mine Train. Its more than 200 Audio-Animatronics® critters occupied a seven-acre footprint, with areas themed to Walt’s various True-Life Adventure documentaries. The 1950 release Beaver Valley inspired this riverside area, where riders could witness the industrious creatures at work.

Perhaps the most famous ribbon cutting in Disney lore is the one that didn’t actually happen: the “scissors malfunction” that plagued Vice President Richard Nixon and his family in 1959 when Nixon, his wife Pat, and daughters Julie and Tricia had come to Disneyland to celebrate the debut of the Disneyland-Alweg Monorail System, Matterhorn Bobsleds, and Submarine Voyage. 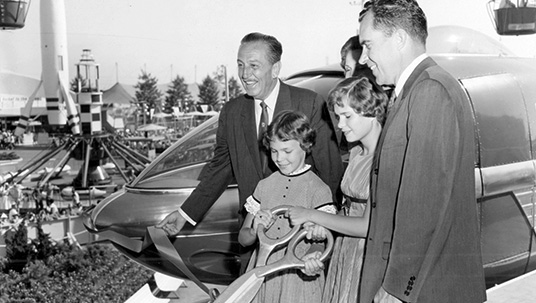 The Nixons had been frequent Disneyland guests going all the way back to their first visit on August 11, 1955. As the then VP sailed out over moonlit London on Peter Pan’s Flight, his wife remarked to reporters, “Dick’s getting a bigger kick out of this than the kids.”

For the festivities on June 14, 1959, the Nixons led an hour-long parade down Main Street in a 1908 Oldsmobile. Following a gala celebration, and the release of 10,000 balloons, the new Disneyland E-tickets were dedicated.

The Nixon family proceeded to Tomorrowland to dedicate the Disneyland Monorail; the only issue was that the oversize ceremonial scissors picked for the occasion refused to cut through the ribbon. In an event that he himself would later poke fun at on his Wonderful World of Color television show, Walt was forced to intercede and tear the ribbon by hand to inaugurate his sleek, futuristic transportation system. 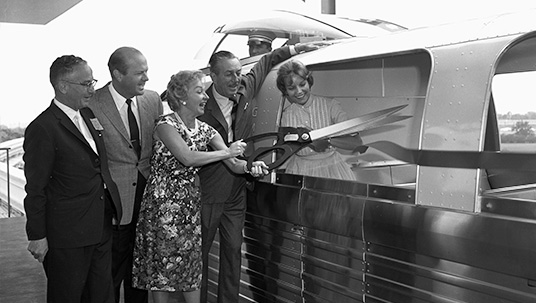 A few years later, when the Disneyland Monorail track was extended to service a new station at the Disneyland Hotel, the Nixons were invited to re-dedicate the attraction. “Inasmuch as your young ladies dedicated the original system,” Walt wrote to Nixon in May 1966, “it would be appropriate for them to dedicate the new extension.” Walt even assured that Disneyland had sorted out the finer points of ribbon cutting, promising, “I can even assure you that the scissors will be sharp this time!”

The Nixons were unable to attend the re-opening of the Monorail on June 11, 1961, but the celebration went on nonetheless, as you can see above. This ceremony was held on the new Monorail platform at the Disneyland Hotel itself; you can see the station’s trademark “Erector Set” architecture in the background. In attendance was California Congressman James Utt, seen on the left. He’d also been a guest for Disneyland’s 1955 opening-day celebration. Cutting the ribbon was actress Bonita Granville and her husband, Disneyland Hotel owner and president Jack Wrather. On the Monorail is Mary Boggess of Kentucky, the first passenger to ride the newly expanded route.

This festive event took place July 29, 1963, when Disneyland unveiled “Salute to Mexico,” a three-month showcase of Mexican culture that transformed Main Street, U.S.A.’s Center Street into a little slice of Mexico in Anaheim. Sponsored by People-to-People, Inc., for which Walt was a trustee, in cooperation with the Mexican Tourist Council, the exhibits ranged from “pottery and jewelry to contemporary art and bull fighting.” 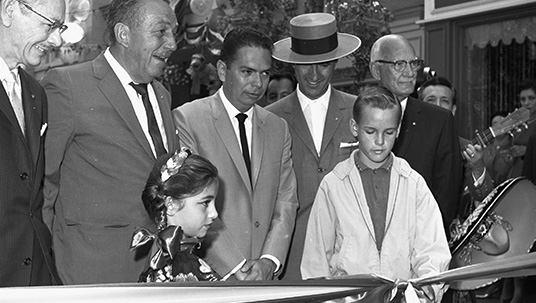 Opening the exhibit were Teresa Lucero, 8, of Los Angeles and Patrick Wade, 12, of Anaheim; they were joined by Edmundo Gonzales, Mexico’s Consul General in Los Angeles as well as Carlos Arruza, a famous bullfighter from Mexico City, and Joyce C. Hall, chairman of the People-to-People committee. Hall, founder and head of Hallmark, was a long-time Disney friend and business partner.

Walt had been a People-to-People trustee since 1961, when friend and organization founder, President Dwight D. Eisenhower, recruited him. He was even approached by the president to head the organization in 1966 when Eisenhower stepped down from the role.

The ribbon-cutting tradition didn’t end with Walt, of course. For six decades, an endless parade of ceremonies and festivities has proclaimed the debut of new Disney adventures. The most recent of these came on December 6, 2012, when the ribbon was cut on New Fantasyland at Walt Disney World’s Magic Kingdom. Always on the lookout for new items of historical interest, the Disney Archives in California brought back a piece of ribbon from the event to save for posterity.

To all who come to this happy place, welcome!

No matter the occasion, Disney ribbon cuttings have always heralded the arrival of fresh wonders and great excitement. It is in that spirit that we welcome you to this new adventure through Disneyana past, present and future. To all who come to this happy place, welcome!