Home / News / Headlines / Disney XD and WDI Team Up for the Most Spooktacular Spots of ...

For the 999 Happy Haunts of Disneyland Park’s Haunted Mansion, the spooky season is always in high gear. But most of us don’t kick into full ghost-and-goblin mode until October—and Disney XD has given us something to shriek about this morning. They’ve teamed up with Walt Disney Imagineering and the renowned stop-motion studio Stoopid Buddy Studios on a series of four spots that bring favorite characters from Star vs. The Forces of Evil and Pickle and Peanut into the world of the Haunted Mansion attraction.

The first spot can be seen tonight during the premiere episode of Milo Murphy’s Law (8 p.m. ET/PT), but we’re giving you a first look at two of the spots in this exclusive sneak peek. As with all of Princess Star Butterfly’s adventures, it’s gonna get a little weird… it’s gonna get a little wild… but it’s going to be hauntingly authentic. All of the music and sound effects you’ll hear in the spots come from the original Haunted Mansion at Disneyland Park, and the voices of the Haunted Mansion characters are the actual attraction voices, as well. Disney XD worked closely with Walt Disney Imagineering to feature details fans of the attraction will surely appreciate, from the tombstones seen in the graveyard—which are modeled after those seen at Disneyland—to the original character created just for these spots, Baby Boo. This is Baby Boo’s official debut—or should that be “de-boo”?—and you can only catch him in this spot, but the character was inspired by an original drawing for the attraction by legendary animator (and, of course, one of Walt’s Nine Old Men) Marc Davis.

In the spot that airs tonight, Star and Pony Head stumble into the wrong dimension and disturb Madame Leota from her restful trance:

Next Monday, October 10, during a Halloween-themed episode of Pickle and Peanut (6:30 p.m. ET/PT), Pickle and Peanut search for their lost keys in the famous Haunted Mansion graveyard, where they meet brand-new ghost Baby Boo and the infamous Hatbox Ghost. If that feels like an eternity to wait, fear not—we have a sneak peek here:

The Grim Grinning Ghosts will be coming out to socialize on Disney XD throughout October. Ezra the Hitchhiking Ghost makes an appearance in the short that premieres during a Halloween-themed episode of Star vs. The Forces of Evil on October 10 (7:30 p.m. ET/PT); while Pickle and Peanut stumble upon Constance the Bride in the short that can be seen in an all-new episode of Milo Murphy’s Law on October 17 (8 p.m. ET/PT).

What a frightfully fun way to kick off the week! 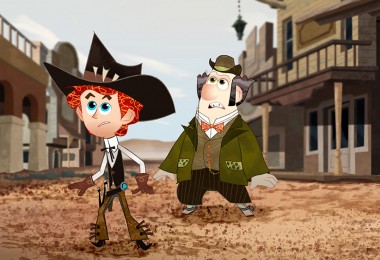