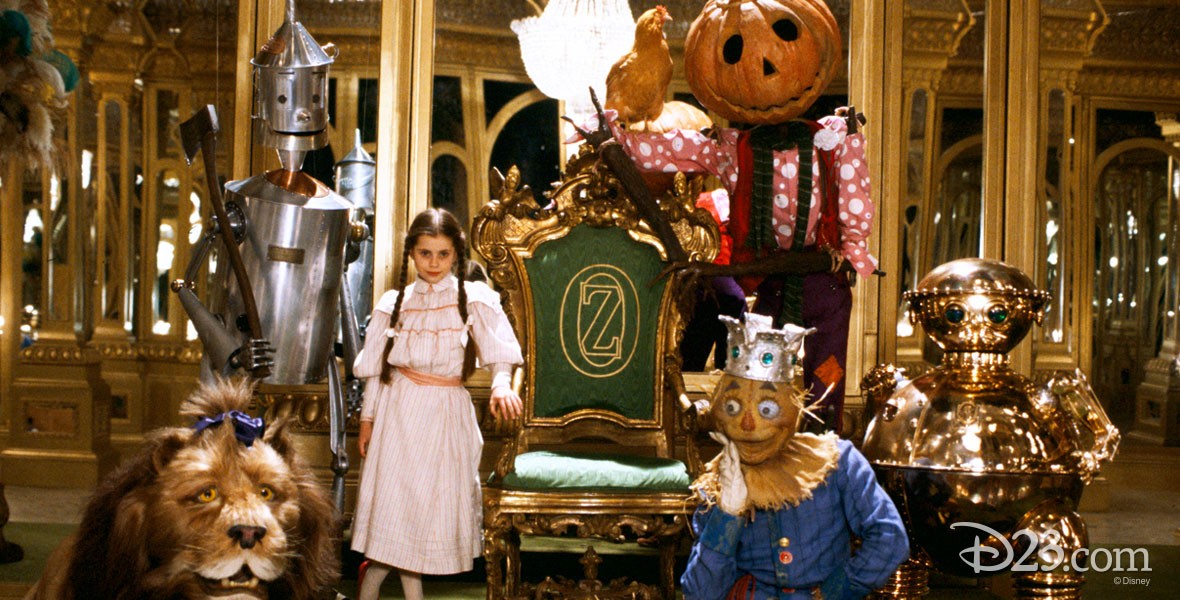 Return to Oz (film) Dorothy Gale, thought to have psychological problems because of her tales of Oz, is sent to an institution and is about to receive shock treatment when a lightning storm enables her to escape down a raging river. She awakens the next day in Oz. But her happiness in returning to Oz soon dissolves into horror as she finds the magical land in ruins, and the Emerald City a wasteland. The kingdom is now ruled by the Nome King and the wicked Princess Mombi, who captures Dorothy. But she escapes with the aid of new friends: Tik-Tok, Billina, a talking hen, Jack Pumpkinhead, and the Gump. They travel to the Nome King’s mountain in the Deadly Desert to find the Scarecrow, and must play a nightmarish game with the evil monarch to save their friend. Dorothy manages to emerge victorious, save her friends, and rescue the mystical princess Ozma, thereby restoring Oz to its former glory. Released on June 21, 1985. Directed by Walter Murch. 109 min. Stars Nicol Williamson (Dr. Worley/Nome King), Fairuza Balk (Dorothy), Jean Marsh (Nurse Wilson/Princess Mombi), Piper Laurie (Aunt Em), Matt Clark (Uncle Henry), Emma Ridley (Ozma), Michael Sundin (Tik-Tok puppeteer), Peter Elliot (Wheeler), Pons Maar (Lead Wheeler), Justin Case (Scarecrow), John Alexander (Cowardly Lion), Deep Roy (Tin Man), and puppet performers Brian Henson and Mac Wilson. The production marked the culmination of three years of preparatory work and research in the United States and Britain. New systems of remote control, stop-motion photography, and a pioneering clay animation process created a wonderland that blended the realistic with the surreal. Sixteen weeks of shooting included interior work on five Elstree stages and filming on the studio lot. There was an additional location on Salisbury Plain, the site of Stonehenge. The production was the realization of Walt Disney’s personal interest in the Oz stories by L. Frank Baum. On November 16, 1954, Disney purchased the rights to 11 of Baum’s books from the author’s son, Robert S. Baum. Originally the Oz stories were considered as the basis for a two-part television show in the Disneyland series and in April 1957 the studio hired Dorothy Cooper to write a preliminary outline of the story. Her original storyline was called Dorothy Returns To Oz. The title changed in August to The Rainbow Road to Oz, and it was largely based on The Patchwork Girl of Oz. Disney realized that his Oz film had become too ambitious a project for television. He announced in November of that same year that a multimillion-dollar live-action musical feature was to start. Bill Walsh was named as producer and Sid Miller as director. Miller wrote songs and musical numbers with Tom Adair and Buddy Baker. To arouse public interest in the project, Disney featured a short Rainbow Road To Oz segment on one of his television shows (The Fourth Anniversary Show of Disneyland on September 11, 1957), which featured two production numbers on three sets, including 120 feet of Yellow Brick Road. Fearing another studio might rush out an Oz film, Disney bought a 12th title from Lippert Pictures, paying almost as much for it as he had for the 11 he already owned. By February 1958, however, the project had died because of Disney’s frustrations with the script and designs, and perhaps fear of competing with the 1939 MGM musical, which was gaining renewed popularity via television exposure at that time. Unfortunately, the Disney film was not a box office success, though it was nominated for an Academy Award for Best Visual Effects to Will Vinton, Ian Wingrove, Zoran Perisic, and Michael Lloyd. Released on video in 1985.