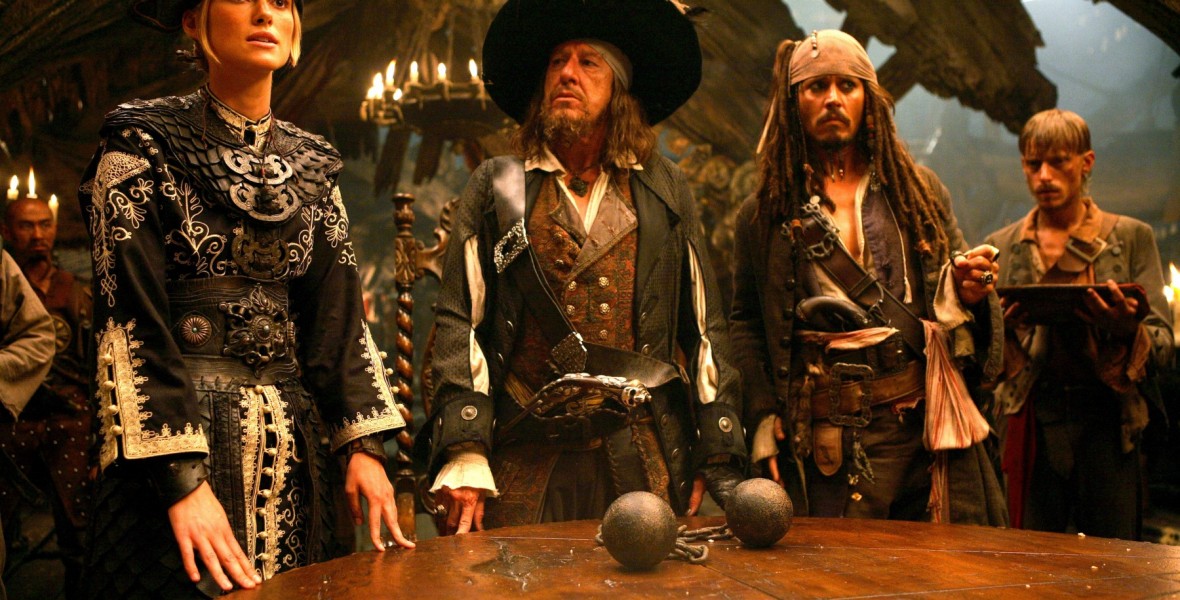 Pirates of the Caribbean: At World’s End (film) Lord Cutler Beckett of the East India Company has gained control of the terrifying ghost ship, the Flying Dutchman, and its malevolent, vengeful captain Davy Jones. The Dutchman now roams the seven seas unstoppable, destroying pirate ships without mercy under the command of Admiral Norrington. Will Turner, Elizabeth Swann, and Captain Barbossa embark on a desperate quest to gather the Nine Lords of the Brethren Court, their only hope to defeat Beckett, the Flying Dutchman, and his armada. But one of the Lords is missing—Captain Jack Sparrow—now trapped in Davy Jones’ Locker, thanks to his encounter with the mysterious Kraken. Our heroes travel to exotic Singapore to confront Chinese pirate Captain Sao Feng to gain charts, and a ship, that will take them off to world’s end to rescue Jack. But, even if Jack is successfully rescued, the Lords may not be able to hold back the fearsome tide of Beckett and his cohorts, unless the capricious sea goddess, Calypso, imprisoned in human form, can be freed and convinced to come to their aid. As betrayal piles upon betrayal, with no one to be trusted, each must make their final alliances for one last battle, in a titanic showdown that could eliminate the freedom-loving pirates from the seven seas forever. Directed by Gore Verbinski. Released on May 25, 2007, after numerous special screenings the night before, and a release on May 23 in France and Belgium. Stars Johnny Depp (Captain Jack Sparrow), Orlando Bloom (Will Turner), Keira Knightley (Elizabeth Swann), Stellan Skarsgard (Bootstrap Bill), Tom Hollander (Cutler Beckett), Chow Yun-Fat (Captain Sao Feng), Geoffrey Rush (Barbossa), Bill Nighy (Davy Jones), Jack Davenport (Norrington), Kevin McNally (Gibbs), Jonathan Pryce (Gov. Weatherby Swann), Naomie Harris (Tia Dalma), Lee Arenberg (Pintel), Mackenzie Crook (Ragetti), David Bailie (Cotton), Keith Richards (Captain Teague). 168 min. Filmed in Super 35. Second sequel to Pirates of the Caribbean: The Curse of the Black Pearl, with much of it filmed concurrently with Pirates of the Caribbean: Dead Man’s Chest.