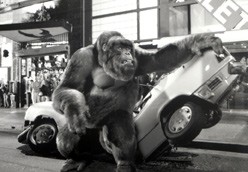 Mighty Joe Young (film) Zoologist Gregg O’Hara is exploring the remote Pangani Mountains in Central Africa when he comes upon an incredible discovery–an awesome 15-foot gorilla. Fearsome and dangerous when provoked, he is tame in the hands of Jill, the 21-year-old orphan who raised the gorilla and named him Joe. When Joe’s life is threatened by poachers, Gregg and Jill rescue him by moving him to a California animal preserve. However, Joe is not safe for long. His newfound notoriety makes him a target for an enemy from his past, a ruthless poacher who is eager to steal Joe for his unique value in the endangered species black market. Feeling threatened and confused in his man-made confines, Joe finally escapes from captivity. With only Los Angeles and its terrified residents in his way, this powerful force of nature attempts to traverse a modern metropolis, leaving a trail of destruction and chaos in his wake. Jill and Gregg race to save Joe’s life before he is destroyed by the encircling authorities, and the chase culminates in an incredible and selfless display of courage by the mighty Joe, proving that within his fearsome frame beats a noble and heroic heart. Released on December 25, 1998. Directed by Ron Underwood. Stars Bill Paxton (Gregg O’Hara), Charlize Theron (Jill), Rade Sherbedgia (Strasser), Regina King (Cecily Banks), Peter Firth (Garth), David Paymer (Dr. Harry Ruben), Naveen Andrews (Pindi). 115 min. Based on the classic RKO motion picture from 1949. Locations in Hawaii, such as the jungles and mountains of Oahu’s Kualoa Valley, doubled for the Pangani Mountains in Tanzania. Animatronics and computer graphics, as well as forced perspective and blue-screen camera work with actor John Alexander in a 40 percent scale “Joe” costume, all contributed to the character of the gorilla. Three different hydraulic versions of Joe, as well as the 40 percent scale suits, were created by Academy Award-winning designer Rick Baker. In scenes where the suits were used, the sets and props also had to be created at 40 percent size. Released on video in 1999.