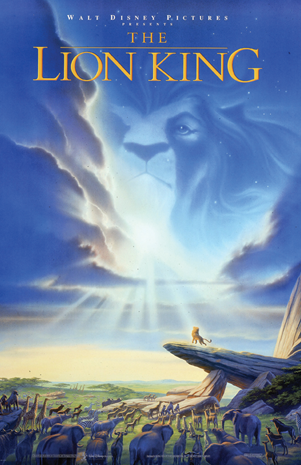 Lion King, The (film) A young lion cub, Simba, struggles to find his place in nature’s “circle of life” and follow in the regal paw prints of his father, the great King Mufasa, after his father is killed by his treacherous uncle, Scar. Scar convinces Simba that he is responsible for his father’s death and urges him to run far away from the Pride Lands and never return. A frightened and guilt-stricken Simba flees into exile where he is befriended by a wacky but warmhearted warthog, Pumbaa, and his free-wheeling meerkat companion, Timon. Simba adopts their “hakuna matata” (no worries) attitude toward life, living on a diet of bugs and taking things one day at a time as he matures into a young adult. When his childhood friend, Nala, arrives on the scene, he is persuaded to return to the Pride Lands, which have fallen into hard times under Scar’s reign, and take his rightful place as king. The wise shaman baboon, Rafiki, convinces Simba that his father’s spirit lives on in him and that he must accept his responsibility, and when he returns, he manages to defeat Scar and an army of hyenas. Limited release in New York and Los Angeles on June 15, 1994; general release on June 24, 1994. Directed by Roger Allers and Rob Minkoff. 88 min. Voices include Jonathan Taylor Thomas (young Simba), Matthew Broderick (adult Simba), James Earl Jones (Mufasa), Jeremy Irons (Scar), Niketa Calame (young Nala), Moira Kelly (adult Nala), Ernie Sabella (Pumbaa), Nathan Lane (Timon), Robert Guillaume (Rafiki), Whoopi Goldberg (Shenzi), Cheech Marin (Banzai), Jim Cummings (Ed). The project originated a number of years earlier under the title King of the Jungle. When production began, an artistic team traveled to Africa to search for ways to best present the African settings in the film, and the animators studied actual live lions and other animals that were brought to the Studio. Songs were by Elton John and Tim Rice, with a background score by Hans Zimmer. Computer generated imagery was used to create the dramatic wildebeest stampede, a visual highlight in the film and a new level of sophistication for the art form. The original release was interrupted when kids went back to school in September, to return on November 18, 1994, this time paired with a 3-minute preview of Pocahontas. Released on video in 1995. The Lion King became one of the highest grossing films of all time. The song, “Can You Feel the Love Tonight, ” won a Best Song Oscar for Elton John and Tim Rice, and a second Oscar was awarded to Hans Zimmer for Best Original Score. A stage show, based on the film, opened at the New Amsterdam Theater in New York City in 1997. The film was re-released in Imax and large format theaters on December 25, 2002. For the Special Edition Platinum DVD release in 2003, a song written for the stage play, “The Morning Report, ” by Elton John and Tim Rice, was adapted, animated, and inserted into the body of the original film. A 3D version of the film was released on September 16, 2011.