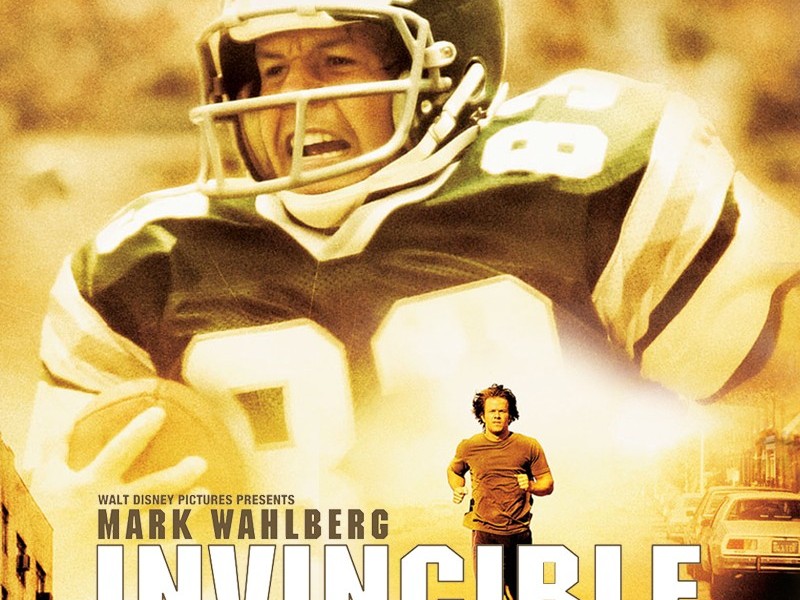 Invincible (film) When Dick Vermeil, the coach of Vince Papale’s beloved hometown football team, the Philadelphia Eagles, hosted an unprecedented open tryout in 1976, the public consensus was that it was a waste of time—no one good enough to play professional football was going to be found this way. Certainly no one like Papale, a down-on-his-luck, 30-year-old substitute teacher and part-time bartender, who never even played college football. But against these odds, Papale made the team and soon found himself living every fan’s fantasy—to be standing on the field as a professional player—while at the same time inspiring his team to break through their 11-season losing streak and rediscover their winning spirit. Directed by Ericson Core. From Walt Disney Pictures/Mayhem Pictures. Stars Mark Wahlberg (Vince Papale), Greg Kinnear (Dick Vermeil), Elizabeth Banks (Janet), Kevin Conway (Frank Papale), Michael Rispoli (Max), Kirk Acevedo (Tommy). Released on August 25, 2006. 104 min. Filmed in CinemaScope. Based on the life story of Vincent Papale, with he and Vermeil acting as consultants to the production. Filmed in Philadelphia, with Franklin Field at the University of Pennsylvania doubling for the now-demolished Veterans Stadium.