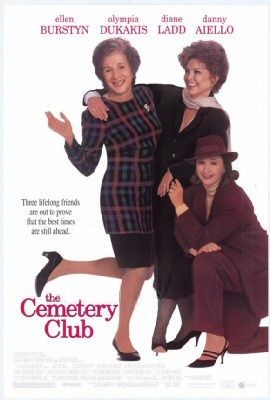 Cemetery Club, The (film) Three lifelong friends, Esther, Doris, and Lucille, suddenly find themselves middle-aged widows and discover the transition to the singles scene both difficult and a challenge to their friendships. Lucille enjoys throwing herself into the over-50 singles circuit, and brings her friends along. Doris will have none of it, preferring to remember her past and a loving marriage. Esther finds herself reluctantly falling in love again with a charming widower, Ben. Conflicts come to a climax at a wedding party for their oft-married friend Selma. Esther learns that Doris and Lucille interfered with her relationship with Ben, and she is bitterly angry. But she learns to forgive, and discovers that she has the courage to live the single life, and patch up her relationship with Ben. Initial release on February 3, 1993; general release on February 12, 1993. Directed by Bill Duke. A Touchstone film. 107 min. Stars Ellen Burstyn (Esther Moskowitz), Olympia Dukakis (Doris Silverman), Diane Ladd (Lucille Rubin), Danny Aiello (Ben Katz), Lainie Kazan (Selma), Christina Ricci (Jessica). Based on the stage play by Ivan Menchell. Filmed on location in the Jewish community in Pittsburgh. Released on video in 1993.