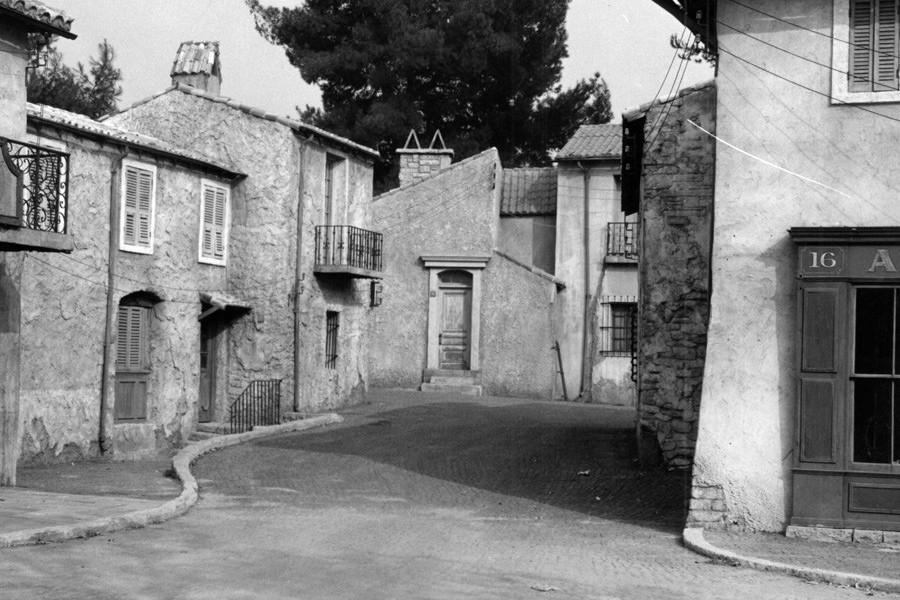 Backlot Area at the Disney Studio in Burbank beyond the office buildings, shops, and sound stages, where outdoor filming was done. Over the years, many different sets have occupied these various locations, which were hidden from the sight of passersby by large berms. The primary set areas were the Zorro set (featuring a town square, the fort, and Don Diego’s home), the Western set (several streets with Western-type saloons, blacksmith shops, etc., constructed for Elfego Baca and Texas John Slaughter), the residential street (with the look of a normal Midwestern town, first used for The Absent-Minded Professor), and the business street (with shops and stores surrounding a town square, originally built for The Ugly Dachshund and Follow Me, Boys, and completely reconstructed for Something Wicked This Way Comes). Other areas could be made to resemble whatever location was needed—a gold-rush town with stream (for The Adventures of Bullwhip Griffin), a colonial-era estate (for The Swamp Fox), a Maine waterfront (for Pete’s Dragon), a Viking settlement (for Island at the Top of the World), an olive orchard (for Monkeys,Go Home!), or an English lane, yard, and cottage (for Bedknobs and Broomsticks).  The backlot saw its primary usage from the late 1950s until the late 1970s. By then, backlots had lost some of their allure, as sophisticated audiences forced movie producers to seek out real, as opposed to the often fake-looking, sets. Besides, it became easier to go on location, with more portable equipment. Gradually, the seldom used backlot sets at the Disney Studio gave way to needed office buildings, warehouses, and parking garages. For television production purposes, a short business street was built in 1997.

Back to School with the Mickey Mouse Club Backlot Express