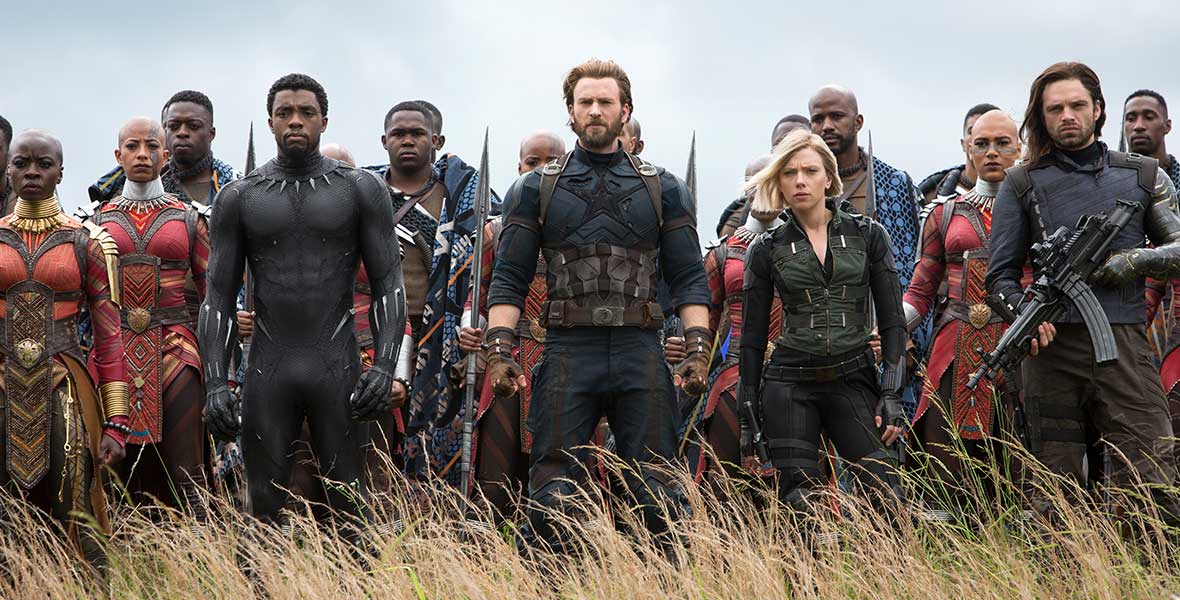 Avengers: Infinity War (film)  As the Avengers and their allies have continued to protect the world from threats too large for any one hero to handle, a new danger has emerged from the cosmic shadows: Thanos. A despot of intergalactic infamy, his goal is to collect all six Infinity Stones, artifacts of unimaginable power, and use them to inflict his twisted will on all of reality. Everything the Avengers have fought for has led up to this moment—the fate of Earth and existence itself has never been more uncertain. Directed by Anthony Russo and Joe Russo. Released on Apr. 27, 2018, also in 3D and IMAX, after an Apr. 25 release in Australia and other countries. Its large-scale premiere on Apr. 23 took place in the El Capitan Theatre, the Dolby Theatre, and the TCL Chinese Theatre along Hollywood Boulevard, which was lined with an extensive display of film props, costumes, and vehicles. Stars Karen Gillan (Nebula), Robert Downey Jr. (Iron Man), Tom Holland (Peter Parker/Spider-Man), Elizabeth Olsen (Wanda Maximoff/Scarlet Witch), Scarlett Johansson (Natasha Romanoff/Black Widow), Chris Evans (Steve Rogers/Captain America), Josh Brolin (Thanos), Chris Hemsworth (Thor), Tom Hiddleston (Loki). 149 min. From Marvel Studios. Filmed in widescreen format. The film became the all-time highest-grossing film for its opening weekend. It was nominated for the Academy Award for Best Visual Effects of 2018 (Dan DeLeeuw, Kelly Port, Russell Earl, Dan Sudick).