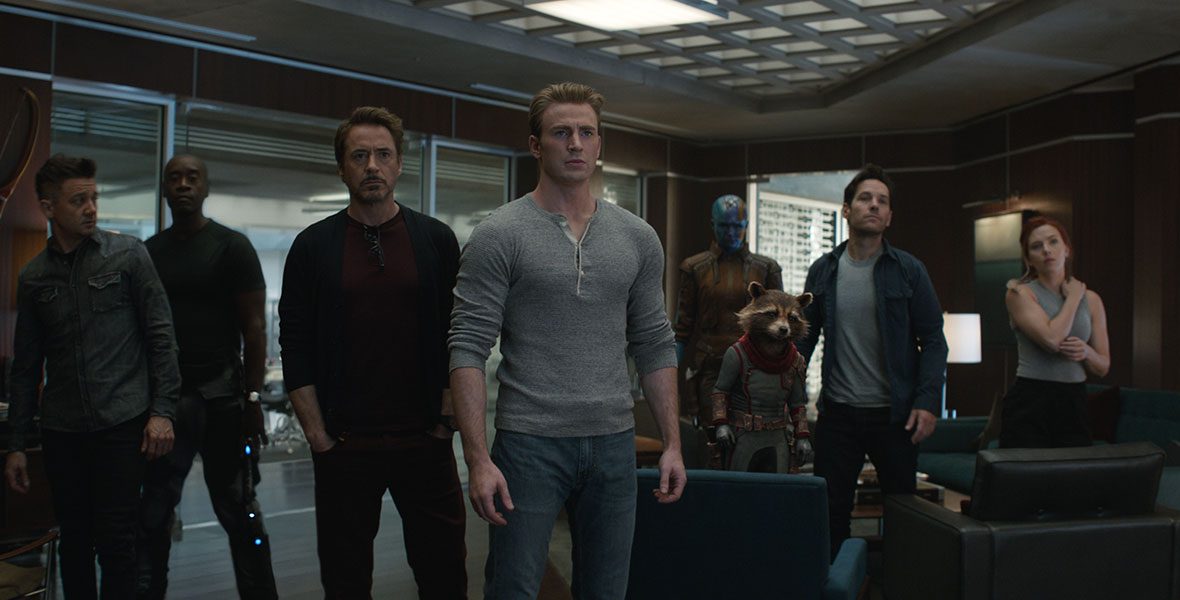 Avengers: Endgame (film) The Avengers have been soundly defeated by Thanos, who, after collecting the six Infinity Stones, imposed his will on all of humanity and randomly wiped out half of the world’s population, including many of the Avengers. In the aftermath of the destruction, the remaining Avengers are faced with their biggest challenge yet: finding the resolve within themselves to get off the mat and find a way to defeat Thanos once and for all. Directed by Anthony Russo and Joe Russo. Released in the U.S. Apr. 26, 2019, also in 3D, IMAX, and IMAX 3D, after an elaborate premiere at the Los Angeles Convention Center on Apr. 22 and a release in Australia and other countries on Apr. 24. Stars Robert Downey Jr. (Tony Stark/Iron Man), Chris Evans (Steve Rogers/Captain America), Mark Ruffalo (Bruce Banner/Hulk), Chris Hemsworth (Thor), Scarlett Johansson (Natasha Romanoff/Black Widow), Jeremy Renner (Clint Barton/Hawkeye), Don Cheadle (James Rhodes/War Machine), Paul Rudd (Scott Lang/Ant-Man), Brie Larson (Carol Danvers/Captain Marvel), Karen Gillan (Nebula), Danai Gurira (Okoye), Bradley Cooper (Rocket), and Josh Brolin (Thanos). 181 min. From Marvel Studios. Filmed in widescreen format. A follow-up to the 2018 film Avengers: Infinity War, it marked the conclusion to the first 22 films produced by Marvel Studios. The film became the first in history to surpass $1 billion in its opening weekend. The film was nominated for an Academy Award for Visual Effects by Dan DeLeeuw, Russell Earl, Matt Aitken, and Dan Sudick.