Home / News / Headlines / 5 Things to Know About Avatar: The Way of Water

In 2009, visionary filmmaker James Cameron invited audiences to experience a world unlike any other with his breathtaking, Academy Award®-winning epic Avatar. Now, fans are invited to embark on a brand-new cinematic journey when 20th Century Studios’ Avatar: The Way of Water opens in movie theaters on Friday, December 16.

In Avatar: The Way of Water, Sam Worthington and Zoe Saldaña reprise their respective roles as Jake Sully and Neytiri, now loving parents doing whatever is required to keep their family safe. When unforeseen events displace them from their home, the Sullys travel across the vast reaches of the moon Pandora, ultimately seeking refuge from the Metkayina clan, who live in harmony with their surrounding oceans. There, they must learn to navigate not only the water world, but the clan’s dynamics. 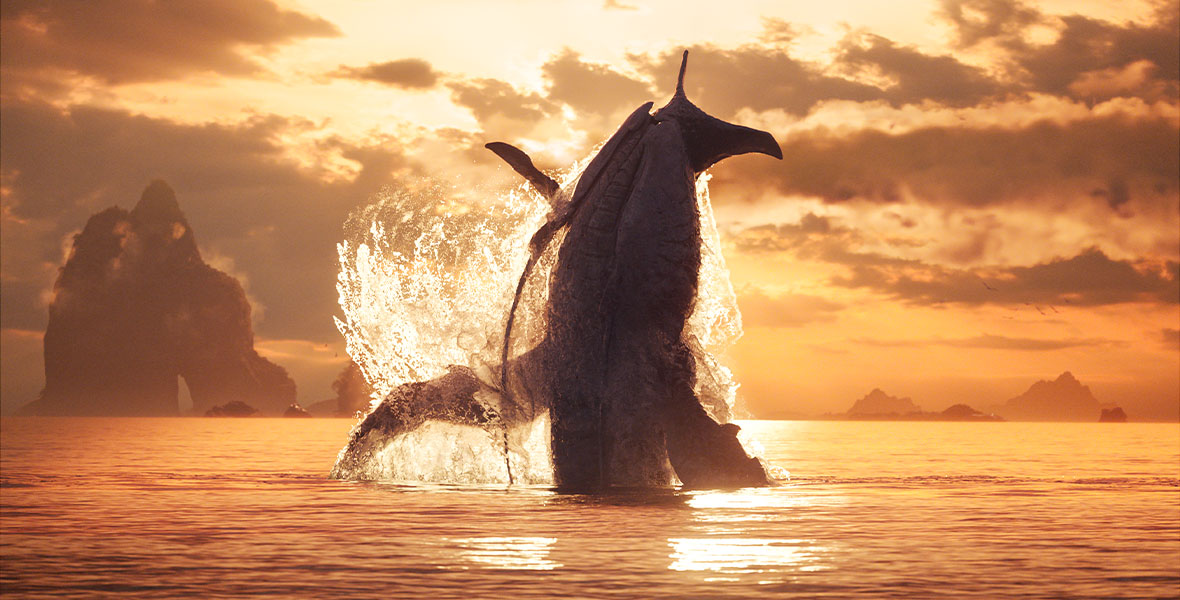 1. James Cameron hadn’t always envisioned writing and directing a sequel.
Although Avatar is the highest-grossing film of all-time, with more than $2.92 billion earned at the global box office, Cameron was only interested in continuing the Avatar story if he had a worthy story to tell. As it turns out, he has several more stories to tell, as Avatar: The Way of Water will be the first in a series of five films planned for release through 2028. According to Cameron, the prospect of doing even one sequel was “a lot to live up to,” but with an “amazing family of artists and troupe players,” he simply couldn’t resist the opportunity to return to the world of Pandora. “It’s a small group. We love each other and enjoy the process,” Cameron said. “Kate got to join that and feel that vibe as well. And that was a big incentive for me to come back and do this all again.”

“I think it’s important for a sequel to honor what the audience loved about the experience the first time, but also to get them off-balance—do things they don’t expect,” Cameron continued. “There are a lot of surprises in terms of where the story goes in this film that we’re not putting into the trailers and the TV spots and all that. You have to experience it. But it also goes a lot deeper, in terms of the heart and the emotions... I was inspired by the fact that both Zoe and Sam are parents, and I’m a parent of five. And so, we wanted to get into the family dynamics and the responsibilities of having kids, and also what that’s all like from the kids’ perspective.”

2. Sigourney Weaver returns to the franchise in a different role.
Weaver plays Kiri, the biological daughter of the avatar of Dr. Grace Augustine, the deceased character she played in Avatar. “Grace’s avatar was still alive; it has no mind of its own because it needed to be infused with Grace’s consciousness in order to move around and talk and so on,” Cameron explained. “But it turned out to be pregnant, a vessel for this little baby.” Because Jake and Grace had “a mother/son relationship” in Avatar, “He’s going to protect her child and raise her child as his own.”

Incredibly in tune with the forest’s flora and fauna, Kiri is different from her siblings Neteyam (Jamie Flatters), Lo’ak (Britain Dalton), and Tuk (Trinity Jo-Bliss). “There’s something unknown about her, something enigmatic about her, and I think Sig walked a beautiful line of classic teenage awkwardness,” Cameron said. “And yet, as she comes into her power, as she comes into her strength, she’s not a warrior. She’s not somebody who would react in a situation like Neytiri would. She’ll react very differently. She’s not really that much of an alpha, really, until we see her manifesting her power.”

“All power to Jim; he wanted to create a complex character,” Weaver added. “There are wonderful things about her, but she also has some deficits. I loved that I had the opportunity to play someone I consider a real adolescent in most ways, and then she has these other bright spots that she’s learning about. I was very honored, too, and thrilled, excited, and terrified. Luckily, there was a long time to prepare. I went to high school classes so I could hear the pitch of [teens’] voices. There’s a big range of who an adolescent is between 12 and 15, and once I saw that, I was like, ‘Okay, I can let Kiri come out’—whoever that is, combined with who I was at 14. It was sort of a muddle.” 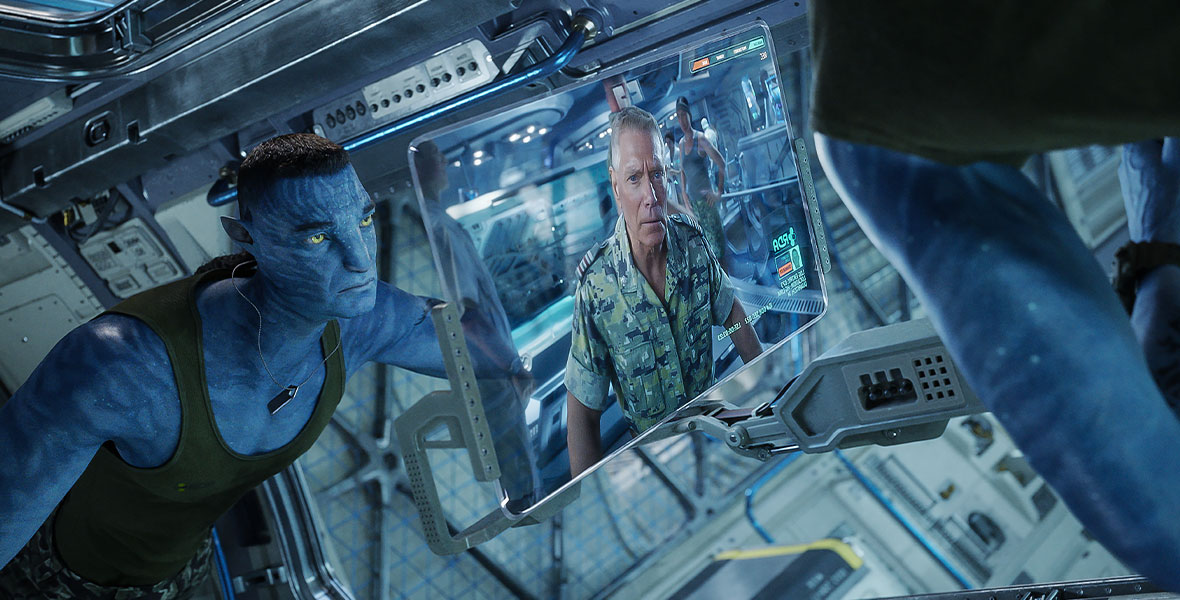 3. Stephen Lang also returns as a new character... sort of.
Lang’s Colonel Miles Quaritch died in battle in Avatar, but the actor is back in the sequel as a “recom,” a specialized avatar that has been embedded with the memories of a human driver—in this case, Quaritch’s. “It was very exciting to come back,” Lang said. “I was just so honored to be able to deepen and expand on the vision that Jim had for this character. I think in the first film he’s very, very colorful; he’s got personality, he’s got some great qualities—but, essentially, he moves through like a mindless shark. But in this iteration of it, there’s the absolute magnificent irony of coming back as the very thing he has been trying to destroy and having to make the adjustment to that, to adapt to that. It was a total pleasure for me to continue to massage this character, and find the depth, and maybe some of the humanity in him.”

4. Kate Winslet was eager to reunite with Cameron.
Together, Cameron and Winslet made a splash when Titanic was released in 1997. Now, a quarter of a century later, they’re making waves again with Avatar: The Way of Water—a project so ambitious that Winslet couldn’t turn it down the role of Ronal, the tsahìk of the Metkayina clan. “With it being Jim, I expected the absolute best of everything,” Winslet said. “It’s precision, it’s thought through, it’s thorough, it’s meticulous. I think the thing that pulled me in most of all, above everything else, is the characters he’s created. Jim has always written—for women—characters who are not just strong but are leaders. They lead with their heart and with integrity. They stand in their truth. They own their power. They have physical power that is admirable. And to be part of that, to be included, it was just so flattering.”

Winslet credited Worthington and Saldaña for creating the “heartbeat” of the film. “It’s one thing for Jim to write it; it’s quite another to find it, to give it a life, a pulse, and real blood in those veins,” she said. “It’s really, really extraordinary to be around that. It’s not a performance. It’s not things they came up with on the day. It is a universe. It is a love. It is something that is palpable. You feel it. You step into that space—it’s an empty space—but it is absolutely loaded with truths and dynamics and pulses that they built. They built it, they shared it, and it’s honestly very special to have been part of it.” 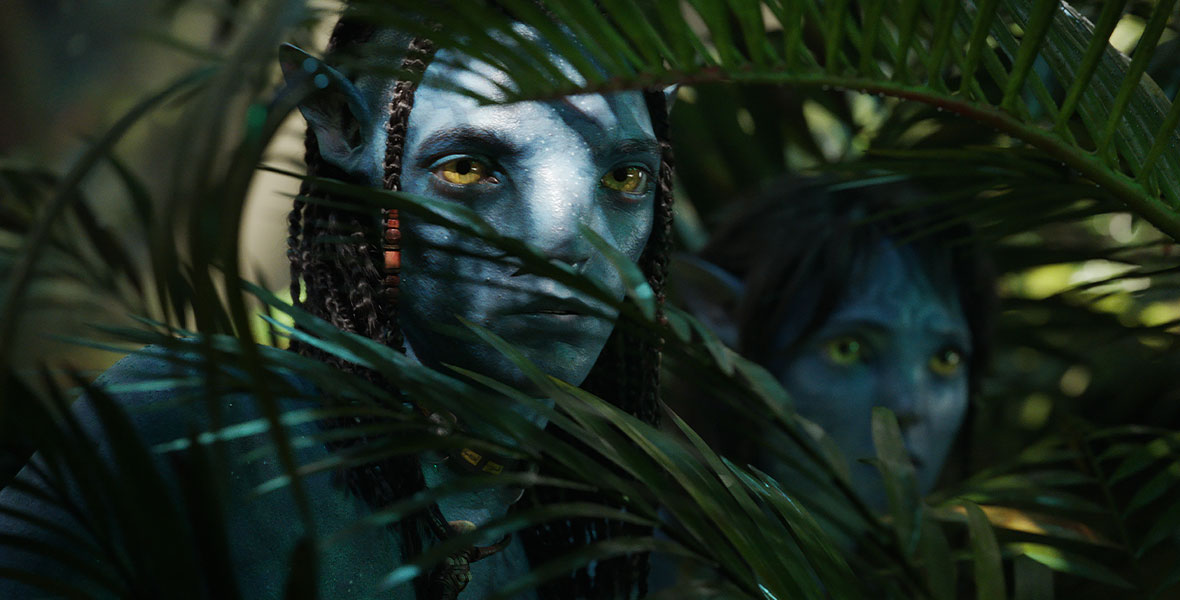 5. Avatar: The Way of Water is all about family.
According to Worthington, Jake’s journey always been about finding his place in the world and finding something worth fighting for—and marriage and fatherhood gave him a sense of purpose on Pandora. “In the first film, Jake says it in the voice-over, ‘Open your eyes,’” the actor said. “He’s opened his eyes to love: the love of culture, the love of the planet, the love of Neytiri. This film is the natural extension of that. They have a family. Now, it’s about the protection of that love, that world, and that culture.”