Home / News / D23 Exclusive / Our Nominees for Best Performance by a Disney Character ...

This Sunday night, four actors will take home Oscars® for their performances in Leading and Supporting Roles. This year's crop of nominees is full of talent and the Members of the Academy certainly have tough decisions on their hands. But we think you'll agree that the talented movie stars who'll be honored in the Dolby Theatre this weekend might consider themselves fortunate to not have to go head-to-head versus these animated Disney characters who have all delivered their own Oscar-worthy performances.

Mulan (Mulan)
Posing as the opposite gender is a feat often rewarded with Oscar nods, as proven by screen legends like Dustin Hoffman (Tootsie) and Jack Lemmon (Some Like It Hot). In order to spare her father from being conscripted into the war, Mulan disguises herself as a man—training under the stern and dutiful Li Shang, fighting alongside her fellow soldiers against the Huns, and almost single-handedly defeats Shan Yu. Not too shabby for a simple farm girl! 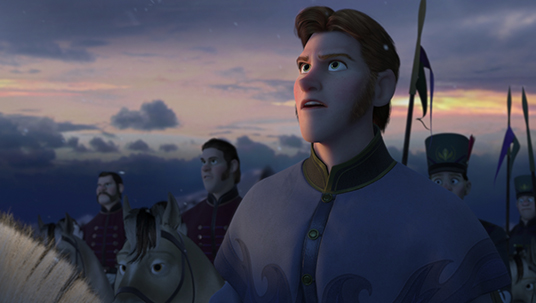 Hans (Frozen)
Hans expertly uses his backstory—that he is the forgotten, unappreciated 13th son from the Kingdom of the Southern Isles—to make Anna, and every single moviegoer believe that he is a romantic, charismatic leader who will take good care of both Anna and Arendelle. The moment when he icily tells Anna, "If only there was someone out there who loved you . . . " elicits a gasp every time. Look up the phrase "wolf in sheep's clothing," and you'll find Hans. 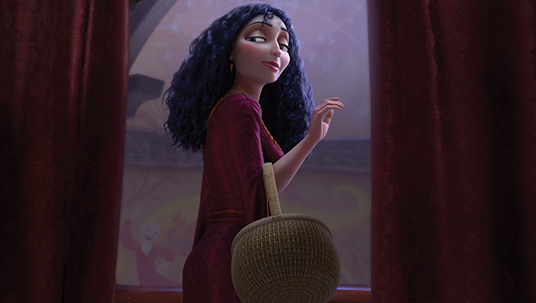 Mother Gothel (Tangled)
Any garden-variety meanie can play the part of a villain, but it takes a special talent to play a villain who elicits sympathy. Mother Gothel almost makes you believe that she cares about Rapunzel—"I love you most" is a gem—and her vanity and desire to cling to her youth makes for character motivation that's quite universal. Mother Gothel is part witch, part old-movie grande dame. 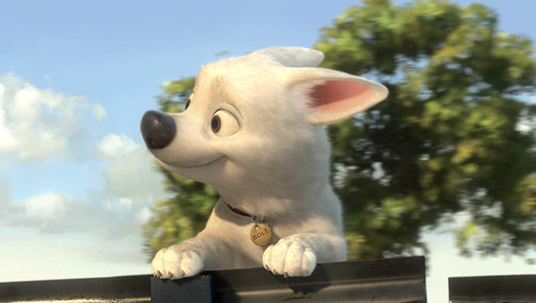 Bolt (Bolt)
You might think of Bolt as the ultimate method-actor—even if he doesn't know it at first. The star of his own TV show, Bolt is deceived into believing that the harrowing situations from which he rescues his human companion, Penny, are actually real—in order for the filmmakers to obtain a more genuine performance from him. It turns out that Bolt really is a natural—after he discovers that he has no superpowers at all, he digs deep and summons courage from within, "acting" brave in order to save Penny. And after this final tour de force, Bolt retires from acting, discarding the life of a canine actor for the simpler life of a canine. 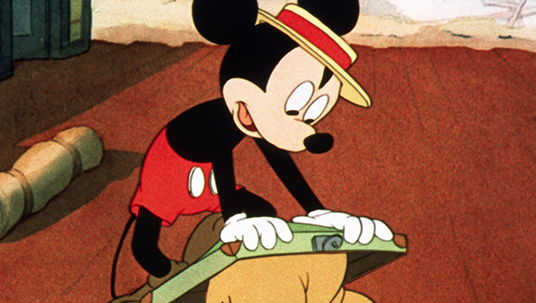 Mickey Mouse (Mr. Mouse Takes a Trip)
This hilarious short opens at the Burbank train station, where Mickey and Pluto wait for a train that will whisk them away for some R&R in Pomona. They blithely board only to run smack dab into the menacing figure of Conductor Pete, who punt kicks the two pals off the train, screaming, "No Dogs Allowed!" Over the course of the next five minutes or so, Mickey, intent on having his canine pal along for the ride, dons plenty of disguises to fool Pete—think Leonardo DiCaprio in Catch Me If You Can. After an attempt to stuff Pluto into his valise ends in failure (we love Mickey's "M.M." monogram, however), Mickey dresses as a mother with child (Pluto is pretty convincing as the latter), a train conductor, and a Native American in full regalia. A really impressive performance; however, he never really does fool Pete! 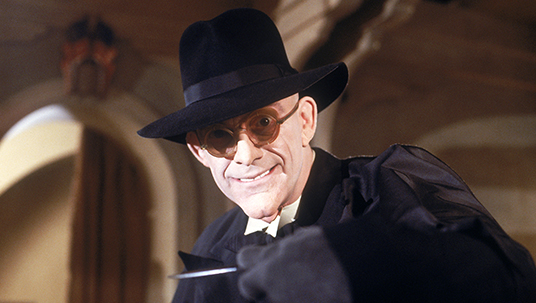 Judge Doom (Who Framed Roger Rabbit)
A psychiatrist could probably have a field day with Judge Doom, who plays the part of a humorless city administrator who would like to rid the world of Toons—while hiding the shocking secret that he's actually a Toon himself. Doom spends a lifetime trying to pass as human; wearing gloves, essentially posing as a germaphobe or a clean freak, rather than take the risk of falling victim to his own Toon-dissolving "Dip." When Doom ultimately perishes, he shrieks with the abandon of someone who has probably spend decades hiding his true self. Doom's commitment to his role is what places him alongside such masters of physical transformation as Robert DeNiro (Raging Bull) and Tom Hanks (Cast Away). 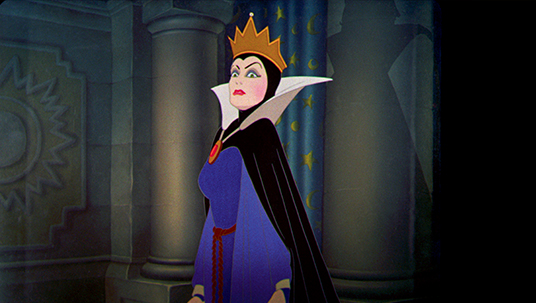 The Evil Queen (Snow White and the Seven Dwarfs)
Award-winning actors are never afraid to put their vanity aside for the good of a role. The Queen may not be the fairest in the land in Snow White and the Seven Dwarfs, but she needs to act like she believes there's no one fairer—the magic mirror is really just her "yes man." Only a character with such confidence in her appearance could so convincingly alter her looks and show up on Snow White's doorstep. Sure, the Evil Queen drinks an "uglifying" potion, but it takes more than witch's brew to effect such a convincing transformation—it takes acting chops that would give Meryl Streep a run for her money. 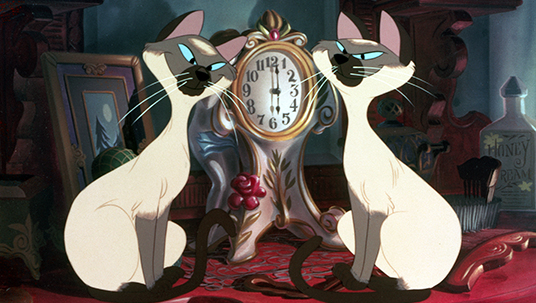 Si and Am (Lady and the Tramp)
The buddy-buddy picture is a Tinseltown staple. Who can forget Butch Cassidy and the Sundance Kid or Thelma and Louise? And, while Lady and the Tramp is anything but a buddy-buddy picture, two of its characters—the sly and slinky Siamese cats Si and Am—make for an inseparable and memorably dastardly duo. They emerge from Aunt Sarah's picnic basket to perform their trademark number, "The Siamese Cat Song," a tour de force of feline stealth and treachery. As the song comes to a close, Lady discovers their plan to sample some of the newborn baby's milk—and gives chase. But this succeeds only in wreaking havoc on the household. It's all Si and Am's fault, of course, but, in an impressive piece of acting that would make Olivier proud, they feign injury and Lady gets the blame. 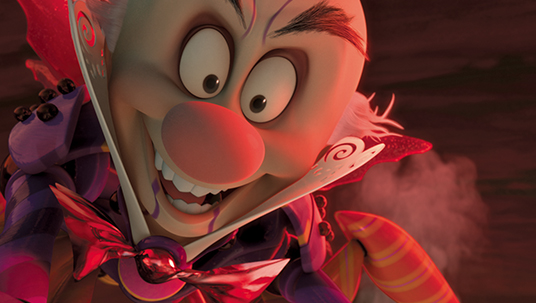 Turbo/King Candy (Wreck-It Ralph)
It is not a glitch, but rather true talent for drama that places Turbo/King Candy in our gallery of estimable Disney character actors. You can argue that Turbo's tale is one of reinvention, that he had to change and evolve into Sugar Rush's King Candy in order to survive, or you could look at him as a personality as big and as dramatic as Bette Davis' in All About Eve, reacting and watching over his shoulder as newer and fresher videogame icons cut into his popularity. Turbo so values winning at all costs and is so adept at maneuvering his way into other plots that we think this year's Oscar nominees are lucky he hasn't turned up as a singing prince in Into the Woods, as a codebreaker in Imitation Game, or as a modern-day stage actor in Birdman. 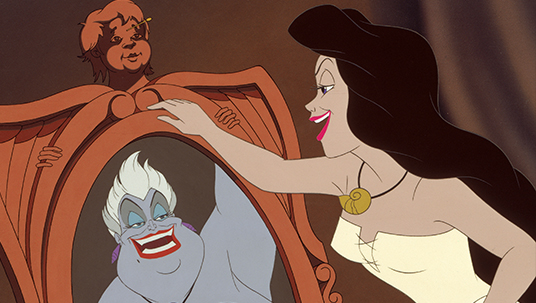 Ursula (The Little Mermaid)
Some actors have such big personalities that they shine through whatever role they're playing, yet we love watching them anyway because no one else can really do what they do. Ursula is one of those thespians. When she essentially tries to assume the role of Ariel, even she knows that she can't put a damper on her true self—hence, she becomes part of Prince Eric's world as "Vanessa." She's equipped with Ariel's voice, but the hair is darker, the lips are redder, and her singing voice is throatier. One might accuse Ursula/Vanessa of chewing the scenery, but she's a larger-than-life figure—as a human and as a sea witch—who we can't help but love to hate.