Home / Headlines / Get Ready to Rock Out on Guardians of the Galaxy – Mission: ...
Skip to content

Guardians of the Galaxy is just as well known for its awesome music as it is for its irreverent comedy and lovable, quirky characters, and the brand-new attraction at Disney California Adventure park is no different. If you’ve been wondering which of the songs would be on the attraction’s awesome mix, wonder no more! We got the inside scoop from the folks behind the new attraction, opening May 27 at Disney California Adventure park.

John Dennis, executive creative director of music at Walt Disney Imagineering (how cool is that job?), told us about the process for coming up with the six songs you can hear during a rockin’ ride on Guardians of the Galaxy – Mission: BREAKOUT! John and his team used Star-Lord’s awesome mix as a starting point, and ended up testing out 100 different songs to find the right fit. The six chosen for the attraction are the perfect mix of fun and funky and help make each ride on the thrilling attraction a truly unique experience. Check out the “playlist” below and let us know which song you’re most excited to hear during your first ride on Guardians of the Galaxy – Mission: BREAKOUT! 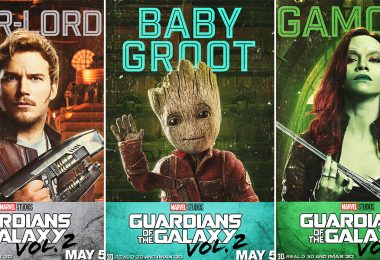 These Guardians of the Galaxy Posters are Awesome, Obviously