The past year was full of magical moments: Disneyland reopened, Super Heroes soared across the big screen, and the D23 team even flew all the way to Florida to throw the ultimate celebration for the 50th anniversary of Walt Disney World Resort! As we ring in 2022, we’re taking a look back at our favorite memories, moments, and more from 2021. 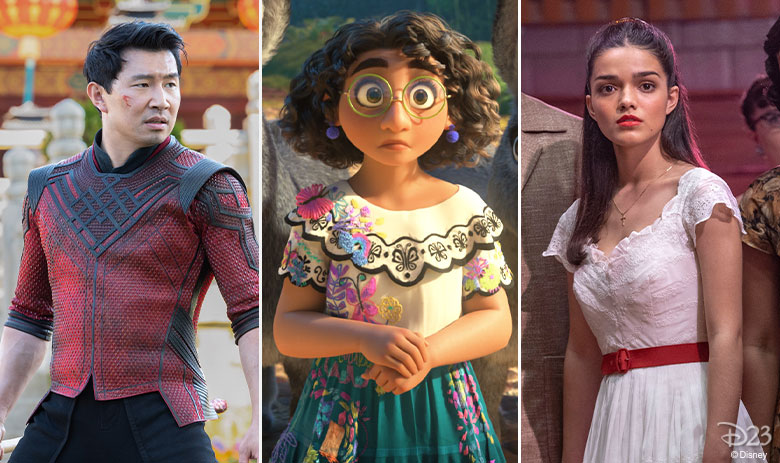 A Different Kind of Movie Marathon
No other company makes movie magic quite like Disney. Whether fantastic or real (or somewhere in between), the stories told by 20th Century Studios, Hulu, Marvel Studios, National Geographic Documentary Films, Pixar Animation Studios, Searchlight Pictures, Walt Disney Animation Studios, and Walt Disney Studios Motion Pictures over the past year captivated audiences—introducing us to new characters and reacquainting us with old ones.

When we say there was something for everyone to enjoy, that’s no exaggeration. After all, nearly 40 titles were released over the past 12 months. Some of our favorites here at D23 include (in chronological order): Derek DelGaudio’s In & Of Itself, Flora & Ulysses, Nomadland (winner of three Oscars®), Boss Level, Raya and the Last Dragon, Cruella, Plan B, Luca, False Positive, Summer of Soul (…Or, When the Revolution Could Not Be Televised), Black Widow, Jungle Cruise, Playing with Sharks, Stuntman, Free Guy, The Night House, Vacation Friends, Shang-Chi and The Legend of The Ten Rings, The Eyes of Tammy Faye, Fauci, The Rescue, The Last Duel, Becoming Cousteau, Ron’s Gone Wrong, The French Dispatch, Antlers, Home Sweet Home Alone, Eternals, The First Wave, Encanto, Diary of a Wimpy Kid, Torn, West Side Story, Mother/Android, Nightmare Alley, and The King’s Man. If that list seems impressive (and it really is), just wait until you see what’s coming next year! 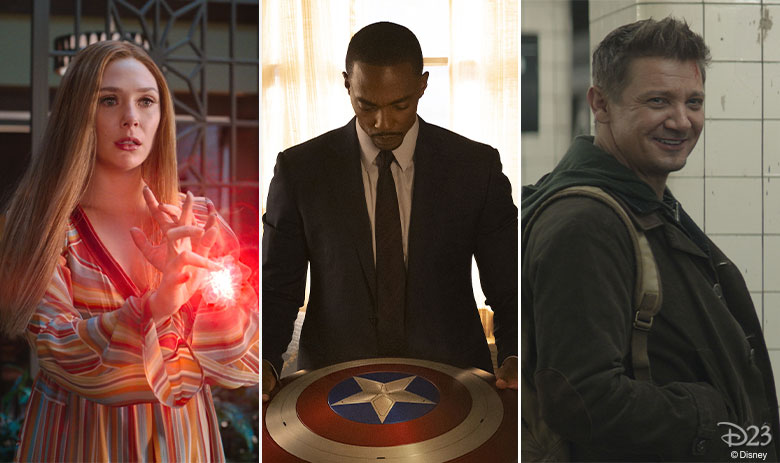 Year of Storytelling
Throughout 2021, television shows comforted audiences with the return of old favorites and the introduction of new friends across Disney+, ABC, Disney Channel, Freeform, National Geographic, and Disney Junior. Marvel Studios’ slate of Disney+ programming–including WandaVision, The Falcon and the Winter Soldier, Loki, What If…?, and Hawkeye—kept fans on the edge of their couches week-to-week, awaiting the next twist and turn in the MCU… Speaking of the streaming service: In a galaxy far, far away, Star Wars: The Bad Batch also debuted, and a legendary bounty hunter made his long-awaited homecoming in the new series The Book of Boba Fett. And on National Geographic, Genius: Aretha captivated viewers with untold stories of one of the music industry’s biggest innovators.

Popular series such as black-ish, The Conners, and A Million Little Things returned to ABC, along with historic seasons of The Bachelor and The Bachelorette. And Disney Channel’s BUNK’D, Disney Junior’s Mira, Royal Detective, Freeform’s grown-ish and Good Trouble, and FX’s What We Do in the Shadows all continued to delight audiences. Other 2021 standouts included Disney Channel’s Secrets of Sulphur Springs and ABC’s The Wonder Years, as well as Disney+’s The Mighty Ducks: Game Changers, Big Shot, Turner & Hooch, Doogie Kamealoha, M.D., Just Beyond, The Mysterious Benedict Society, Secrets of the Whales, Monsters at Work, and Welcome to Earth—just to name a few. If you thought 2021 boasted fantastic content to binge-watch, wait ’til you see what’s in store for 2022! 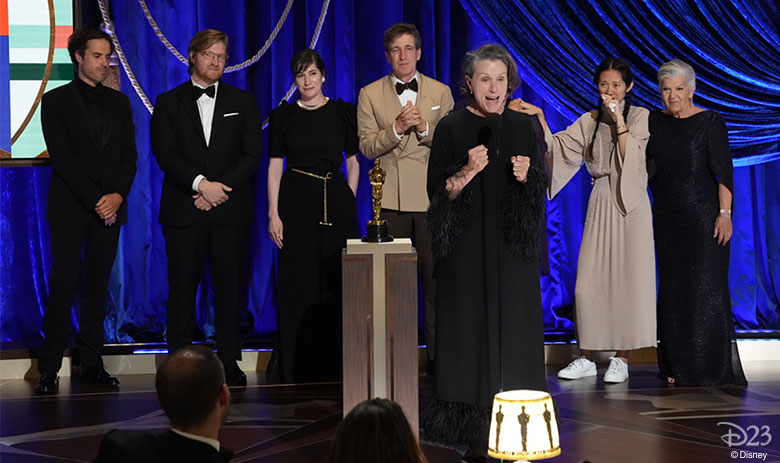 Awesome Honors
Back on February 28, titles from across The Walt Disney Company took home five Golden Globe® Awards. Nomadland came away a winner in several prestigious categories—including Best Drama, as well as Best Director for Chloé Zhao, who became the second woman to ever receive the award and the first woman of color. “This is what he said about compassion: ‘Compassion is a breakdown of all the barriers between us, a heart-to-heart bonding,’” Zhao said that night, quoting real-life nomad Bob Wells. “‘Your pain is my pain. It’s mingled and shared between us.’ This is why I fell in love with making movies and telling stories, because they give us a chance to laugh and cry together and they give us a chance to learn from each other and to have more compassion for each other.” Additionally, the Hulu Original The United States vs. Billie Holiday was recognized with a win for star Andra Day, who received the Golden Globe for Best Performance by an Actress in a Motion Picture—Drama; and a pair of Golden Globe Awards—the first two for Disney+—went to Disney and Pixar’s Soul, for Best Picture—Animated and Best Score Motion Picture (written by Jon Batiste, Atticus Ross, and Trent Reznor). Dig a bit deeper into all the 2021 Golden Globes fun right here at D23.com.

Nomadland and Soul once again garnered some of the evening’s most illustrious honors at the 93rd Oscars—which aired live on ABC on April 25—with three wins total for the drama: Best Motion Picture (the acceptance of which is pictured above); Best Actress in a Leading Role for Frances McDormand; and a history-making Best Achievement in Directing for Zhao (who became the first Chinese woman to receive the award and just the second woman to win the award in the Oscars’ 93-year history). Disney and Pixar’s hit claimed another two wins: Best Animated Feature and Best Original Score. Read up on Hollywood’s biggest night at D23.com.

Later in the year, The Walt Disney Company earned an impressive 166 Primetime Emmy Award® nominations, including 24 for Disney+’s The Mandalorian alone. During the September 19 ceremony, Hamilton won the Emmy Award for Outstanding Variety Special (Pre-Recorded). 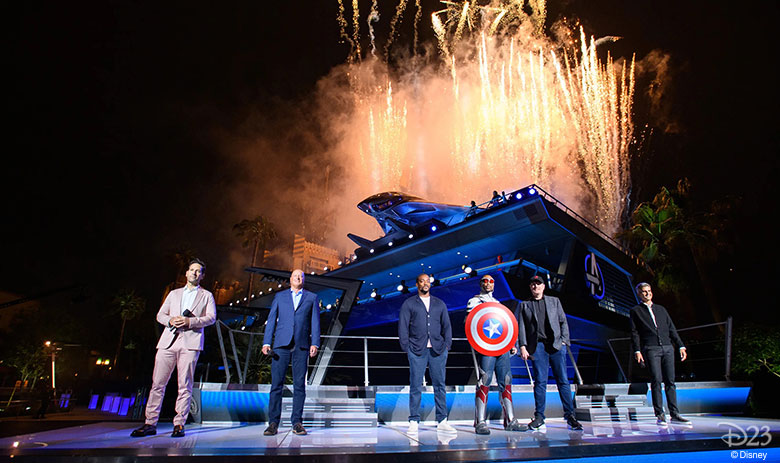 Super Heroes and Celebrations at Disney Parks
2021 was a milestone year for Disney Parks around the world, with reopenings, reimaginings, and one very magical celebration! In April ’21, Disneyland Resort reopened its gates to fill the world (and our hearts) once again with magic—and with that reopening, we welcomed two newly reimagined attractions: Snow White’s Enchanted Wish, an enhanced update to the Fantasyland classic Snow White’s Scary Adventures; and the fan-favorite Jungle Cruise. Additionally, Haunted Mansion welcomed some scary-good new details harkening back to the history of the beloved attraction.

Meanwhile, at Disney California Adventure park, something super was brewing. Aspiring Super Heroes (and some with more… villainous intentions) flocked to Avengers Campus this past summer, where guests could meet favorite characters and even sling webs with Spider-Man in the new attraction WEB Slingers: A Spider-Man Adventure. Throughout the year, new characters have stopped by the campus to greet guests, including Shang-Chi, the Eternals, Loki (and a variant or two), and even Agatha Harkness!

Disneyland Resort’s holiday season has been filling us with cheer this year, marking the return of some of our favorite classics including A Christmas Fantasy Parade and Haunted Mansion Holiday (celebrating 20 frighteningly fun years in 2021). While the delicious delights of the Disney Festival of Holidays returned to Disney California Adventure, we found a new way to celebrate with the Merriest Nites after-hours holiday parties debuting at Disneyland park, which featured lots of festive fun—and a Muppet or two!

You might have noticed a big celebration happening over at Walt Disney World Resort… We’re only ringing in an incredible five decades of magic at the resort! The World’s Most Magical Celebration kicked off in October 2021 with new merchandise, nighttime spectaculars, decorations, and so much more! D23 Inside Disney filmed a very special video episode to mark the start of the celebration—and then the D23 Team returned in November to keep the celebration going with our Destination D23 event (more on that later). The ongoing transformation of EPCOT debuted two can’t-miss experiences: the new nighttime spectacular Harmonius and a reimagined France pavilion that features Remy’s Ratatouille Adventure, where guests shrink down to the size of a rat to enjoy an adventure with Remy, Emile, and all their friends.

Walt Disney World wasn’t the only place ringing in a special anniversary! At the very start of the year, we celebrated 20 years of Disney California Adventure and the Downtown Disney District. Across the pond, Shanghai Disneyland rang in its fifth anniversary in June, while Hong Kong Disneyland continued celebrating its 15th anniversary. And while Disneyland Paris Resort prepared to celebrate their 30th anniversary in 2022, we saw the opening of Disney’s Hotel New York—The Art of Marvel, which was the resort’s largest refurbishment ever. The hotel is the very first to be dedicated entirely to the celebration of Marvel art, with one of the largest publicly viewable collections of artwork in the world.

As if all that wasn’t enough, we also welcomed new technology and programs to enhance our Disney Parks experiences. We saw many magical debuts—including the Magic Key program and Disney Genie, as well as an all-new Disney Parks TikTok account that brings all manner of Parks and Resorts fun right into your home in a whole new, short-form-video way. 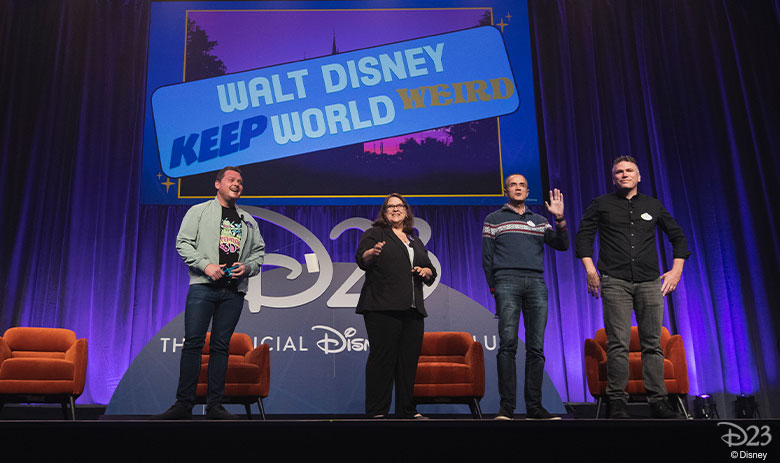 The Return of In-Person D23 Events!
While 2021 marked the return of our in-person events, we kicked off the year in a most Muppet-ational way with our D23 Muppet Mania week of celebration, honoring both the 25th anniversary of Muppet Treasure Island and the debut of The Muppet Show on Disney+. Part of the week-long party was an exclusive behind the “seas” virtual panel with the cast and crew of Muppet Treasure Island and a live-tweeting of the film—with special assistance from The Muppets themselves!

With the reopening of Disneyland Resort in the spring, we welcomed D23 Members back to the Happiest Place on Earth in the wildest way—with an early morning preview of the newly refurbished Jungle Cruise! Guests heard from Walt Disney Imagineers about the history and the future of the attraction before taking the world-famous tour past the elephant bathing pool, the African veldt, and—the sight we all missed the most—the backside of water! Our jungle adventure continued when we turned El Capitan Theatre into an exotic hideaway for our members to celebrate the opening night of Disney’s Jungle Cruise.

While we commemorated 50 magical years of Walt Disney World Resort throughout 2021 with our D23 Gold Member Collector set, The World’s Most Magical Celebration really kicked into high gear in the fall—starting with a member “squeak peek” at Remy’s Ratatouille Adventure, which opened to the public at EPCOT on October 1. In November, we threw the ultimate celebration for Walt Disney World with three days of exhibits, panels, photo ops, and more at our 2021 Destination D23: Presented By Topps. D23 Gold Members joined us for panels covering the vast and colorful history of Walt Disney World Resort, from cuisine to characters to the kooky memories we can’t quite believe happened (shout-out to EPCOT’s The Magical World of Barbie)—all hosted by Disney luminaries, Imagineers, and Walt Disney Archives staff. Plus, guests explored two exhibits full of Walt Disney World history; shopped for exclusive merchandise; and watched early screenings of Walt Disney Animation Studios’ Encanto and Marvel’s Disney+ series Hawkeye. And just this month, we spread holiday cheer with a member mixer at the Bowers Museum in Southern California, where guests enjoyed character moments, live music, hot chocolate, and the newest (and glitteriest) exhibit from The Walt Disney Archives.

But that’s not all we did this year: From movie screenings and the continuation of our D23 X WDI virtual events, to exclusive previews of Walt Disney Archives exhibits around the country, we spread Disney magic to our members with the return of many of our favorite events… and the continuation of some new classics. After a year of spreading pixie dust through our virtual events, it was great to see our members in person again—and we can’t wait to keep celebrating our love of Disney with you into the new year!