“Night in a place of nature is just different.”

These were the words of Walt Disney Imagineering Portfolio Creative Executive Joe Rohde at Walt Disney World Resort’s recent “Awaken Summer” preview event. He continued, “It is meant to be dark. It is meant to be night. There are pools of darkness as much as there are pools of light. There are areas of quiet as much as there are areas of sound. And there’s the constant knowledge that out there around you are animals.

“Night is awake,” he added. “And things come to life.”

Disney’s Animal Kingdom is coming to life in a most spectacular new way this summer, with the park debuting day-into-nighttime experiences that present guests with awe-inspiring offerings they’ve never seen before in a Disney park—along with more time in their day to enjoy them! Previously a daytime-only park, Disney’s Animal Kingdom is staying open through the evening. The park’s animals are staying up later—and you should, too, when you visit! Here are our five favorite ways to while away an evening at this truly unique Disney park: 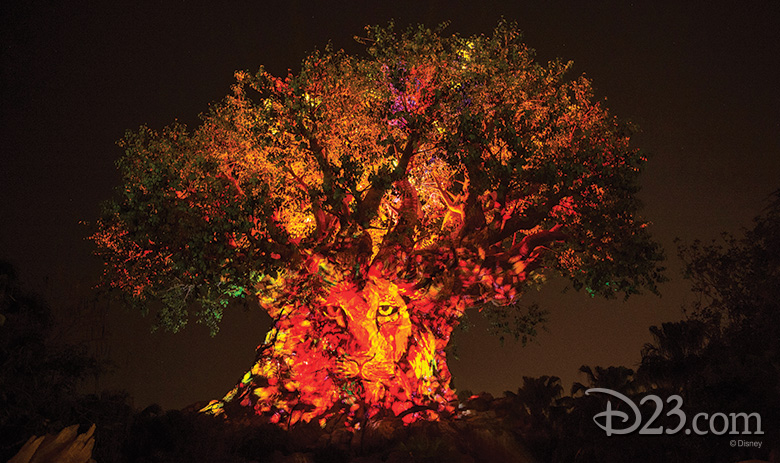 1. The Tree of Life Awakening

As the iconic centerpiece of Disney’s Animal Kingdom, it’s only natural—pun intended!—that the Tree of Life’s dramatic awakening would be one of the most memorable nighttime experiences you’ll find in a Disney park. Walt Disney Imagineering’s Michael Young told D23, “We really looked at the tree as a living creature with these stories and this magic within it that no one got to see during the day, but at night they come out.”

Some of the magic is subtle. You might find yourself walking past the tree and notice something move… You might wonder if you heard a sound you hadn’t noticed before. But then, magically throughout the evening, fireflies appear and a transformation begins. The fireflies bring to life the stories of the animals that are part of the tree, in the carvings, and you’ll wonder if your eyes are playing tricks on you as the stunning visual extravaganza takes place. There are several three-minute-long revelations to be seen: A graceful doe embarks on a thrilling cross-country journey. Love blossoms between two hummingbirds. A spry fox spreads gifts of love among the denizens of a wintry forest. Each vignette celebrates the eternal balance and harmony that exists in all living things.

The tree awakens throughout the night, sometimes when you least expect it. So don’t worry if you’ve missed one awakening—there’ll be another one yet to come, and chances are it will be completely different from the one that came before! 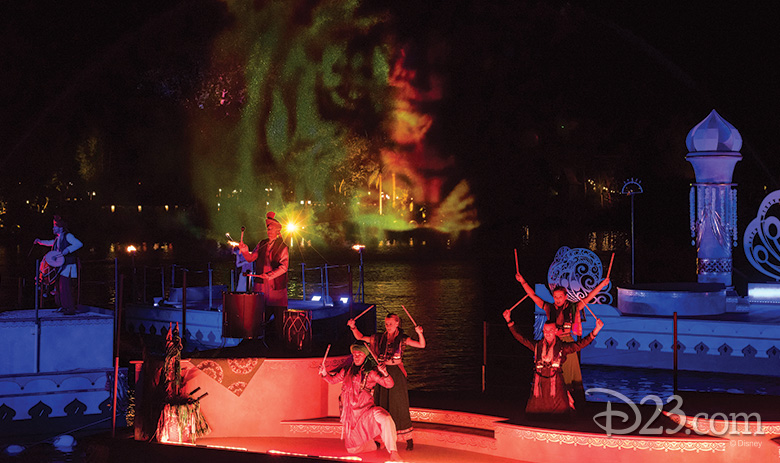 2. The Jungle Book: Alive with Magic

If you were as amazed as we were by the photorealism of Disney’s hit live-action feature, The Jungle Book, prepare to be wowed by the limited-engagement show The Jungle Book: Alive with Magic. The feature film is a great fit for Disney’s Animal Kingdom, Young stressed, with its stunning visual look and its themes that are tied to nature.

The nighttime spectacular, which is set on the Discovery River, combines live music and performance, breathtaking special effects, and Indian-inspired production numbers along with imagery from the films that can be viewed on massive curtains of water that glow to life above the river’s surface. Join Bagheera and other characters from The Jungle Book on a journey through the jungle, following Mowgli’s exciting, perilous, and sometimes hilarious wild encounters. Fans will hear favorite songs from the film—“Trust in Me,” “The Bare Necessities,” and “I Wan’na Be Like You”—all arranged in a rousing, Indian-inspired style. 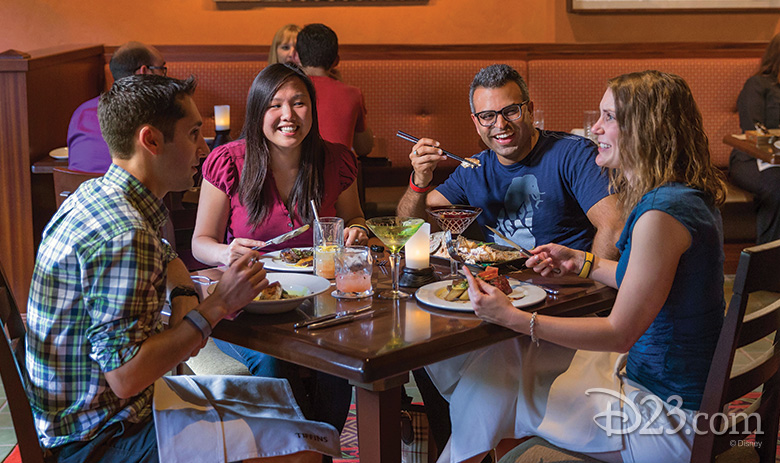 Imagineers have left no detail untouched in Walt Disney World’s newest signature restaurant—and neither have the chefs! Themed to travel, the Tiffins menu celebrates the world cultures that Disney Imagineers visited in creating Disney’s Animal Kingdom. Dishes are inspired by Africa, Asia, and South America—and the art that hangs in the restaurant is, as well.

Weary travelers can also rest a spell at the adjacent Nomad Lounge, which boasts waterfront views along with hand-crafted cocktails and sustainable wines from the same regions that inspired the Tiffins menu.

To learn more about this distinctive new restaurant and lounge, explore your way over to our first look at Tiffins. 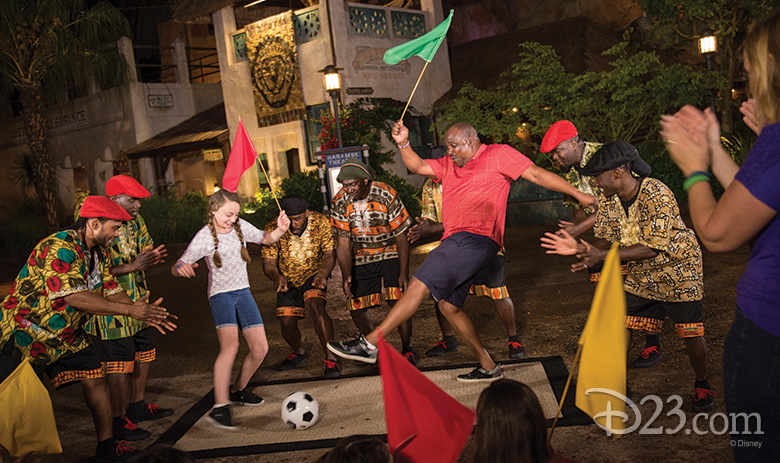 Disney’s Animal Kingdom is bringing you two new ways to get your party on this summer—or should we say, “parti”? At Harambe village in Africa, you can enjoy “Wildlife Parti,” a celebration that features singers, dancers, acrobats, and more. The Wildlife Parti has the feel of a bustling African village, bursting with authenticity and flair. From the Harambe Soccer Meerkats—acrobats who present comic soccer moves inspired by African animals—to the Karibu Sisters, a trio who perform elegant dance, a capella songs, and acoustic renditions of African party music, to the spectacularly outfitted Harambe Village Acrobats, there’s a feast for the eyes every evening. 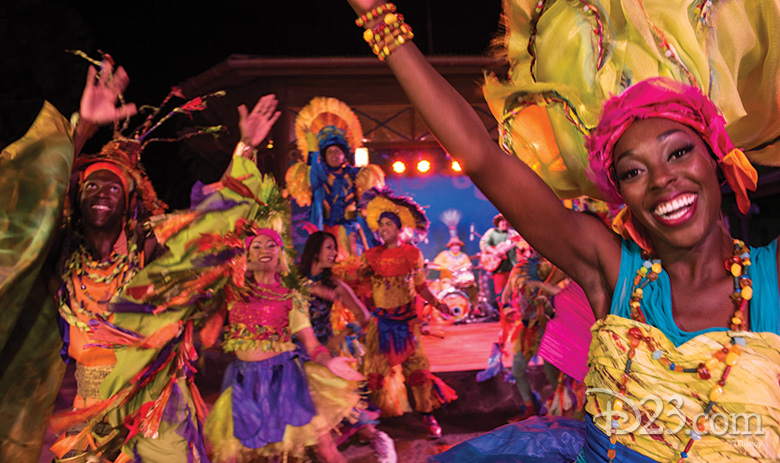 The party is also underway at Discovery Island Carnivale, where dancers, stilt walkers, and musicians look to Carnival celebrations around the world to inspire a fete you won’t forget. You’ll hear the Paraguayan harp, distinctive Latin drumming, and world-beat rhythms.

Laura Offerdahl, a WDI Executive Producer, told D23, “One of our show directors says, ‘The more you look, the more you see.’ I think that’s true of all of our offerings.” 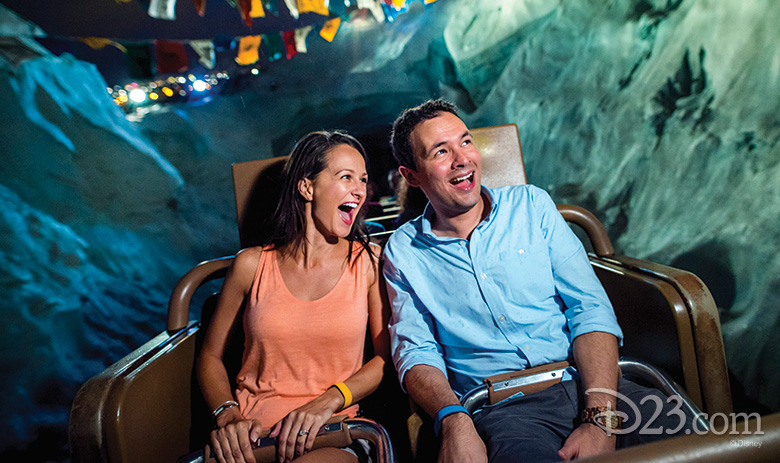 5. Favorite Attractions in a New Light

Expedition Everest is thrilling by day, and it takes excitement to a whole ’nother level at night! The same can be said for Kali River Rapids: ’Tis a perilous journey when the sun is out… after dark, it may be even more exhilarating. Taking Disney’s Animal Kingdom into the night is about more than just turning on the lights—it adds another dimension to all of your favorite attractions as you—literally—experience them in a brand-new light. The ride you know and love becomes a ride you get to know and love all over again. 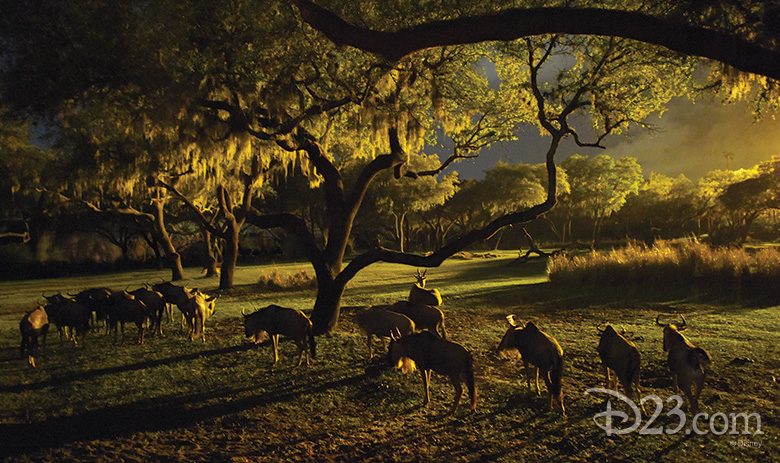 In the case of Kilimanjaro Safaris, Rohde explained to us that new technology made it possible for guests to now enjoy nocturnal encounters, lit as if by sunset. You’ll ride the all-terrain caravan through the savanna, but you might notice the animals behaving differently than they do in the light of day. Lighting is placed strategically, to evoke the setting sun and the rising moon, and your safari guide will help point out the reserve’s animal residents and share details about their nocturnal habits. Two new animal species have also come to the savanna: hyenas and African wild dogs. They’re known to stay up quite late.

Of course, everywhere you look at Disney’s Animal Kingdom—day or night!—you’ll find something that surprises, delights, and maybe even makes you think.

“Disney’s Animal Kingdom has a special kind of magic,” Rohde said. “It’s the magic of nature, and that’s a magic you can believe in—because it, in fact, is real. And we celebrate that magic as night falls—with light, with music, and with ceremonies.” 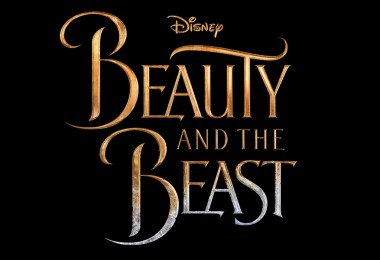 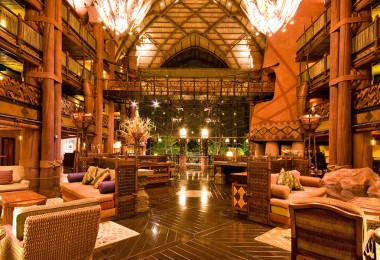