Were you tickled pink by the color run scene in the Disney Channel Original Movie Spin? Did it make you green with envy, perhaps? The event, organized by Ginger (Kerri Medders) and Rhea (Avantika) and inspired by Holi, the Hindu festival of colors, is one of the movie’s standout scenes. But as much fun as the color run looks onscreen, it was actually “really chaotic” to film, recalls director Manjari Makijany. “That was definitely one of those days where everything that could go wrong did go wrong. It was raining, we had a lot of extras, and because we were following all the protocols for COVID-19, we had to make sure everybody tested negative.”

The health and safety of everyone on set was of the utmost importance, of course. Still, Makijany wasn’t about to let inclement weather rain on her parade, and the cast and the extras followed her lead. “All of a sudden, I had half the time to film the emotional beats, the musical beats, and the grand background,” Makijany tells D23. “That was definitely challenging, but it was also the most fun scene to film because we had this lovely color theory going on with Max and Rhea’s color palettes, where Max was in cool colors and Rhea was in warm colors. And when time slows down, Rhea is encompassed in a blue splash of color, and then a yellow splash hits her; it’s literally a melding of her two worlds.” 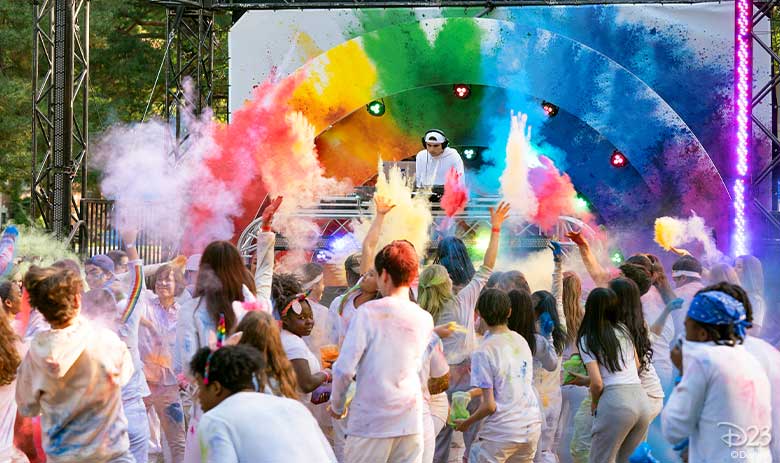 “There was a lot going on with that one, for sure,” adds Anna Cathcart, who plays Molly. “One of the biggest things was we only had one take. We were all wearing white; the whole crowd was wearing white outfits. Once those powder cannons went off and once everyone started throwing powder, you were colorful—and you were gonna stay colorful!”

According to Michael Bishop, who plays Max, working around the “very temperamental” weather added a sense of excitement and urgency to filming. “We had several extras in this park, and every time it would rain, they would be sent back to where they were being held. Then it would stop raining and someone would say, ‘Run! Quick! Everyone, get out there! We’re going to shoot the scene! We’re getting all the colors ready.’ And it would be this crazy run out to the park. We would try to shoot it really quickly, and then it would start raining again, so everyone would have to run back. It was fun, but also tough to navigate.”

To ensure Makijany got all the footage she needed, the cast and extras rehearsed the scene repeatedly as they waited for a break in the clouds. “We went over it for so long to make sure it went smoothly,” says Cathcart. “It was definitely a chaotic day with so much going on and so many people managing all the moving parts, but it worked out. It was beautiful.” 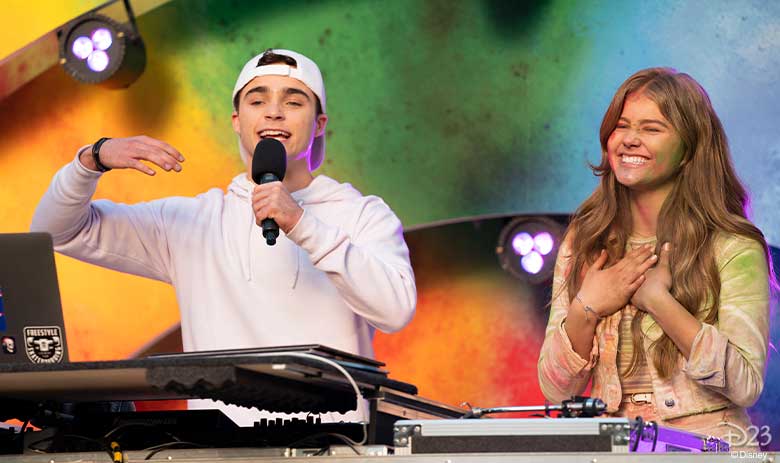 Jahbril Cook, who plays Watson, recalls another highlight of the shoot: “It looks so beautiful, magical, and majestic in the movie; I had a great time. It looks so good!”

While “everything that could go wrong did go wrong,” everyone is proud of how the scene turned out. According to Makijany, “A lot of people celebrated Holi for the first time when we were filming that scene, and they were like, ‘I can’t believe we haven’t celebrated this festival before. We’ve got to continue this tradition and celebrate Holi every year.’ So, it was fun.” Bishop was one of those people, and he had a blast sharing the moment with his co-stars. “Shooting the color run was awesome because I’d never experienced this part of Indian culture before,” he says. “I learned so much. It was awesome to be thrown into that.” 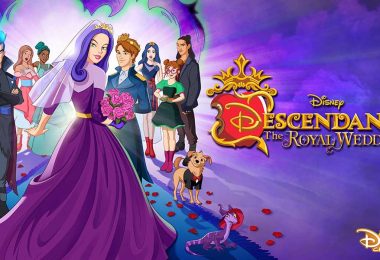 Inside the Magic of Descendants: The Royal Wedding