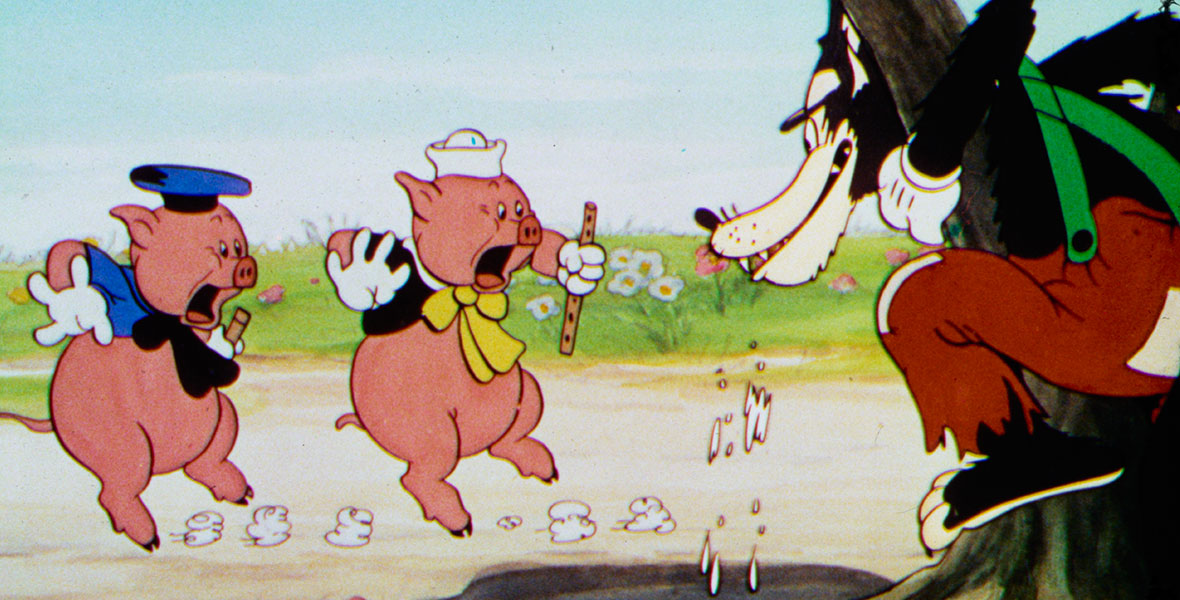 Three Little Pigs (film) Silly Symphony cartoon; released on May 27, 1933. Directed by Burt Gillett. While two happy-go-lucky pigs frolic and build flimsy houses of straw and sticks, the third pig toils at building a secure brick dwelling. The Big Bad Wolf manages to huff and puff and blow down the first two houses, but meets his match at the third. When he tries to slide down the chimney, he is scalded by landing in a boiling pot. When released in 1933, this cartoon not only strengthened Depression-weary audiences, who made the theme song, “Who’s Afraid of the Big Bad Wolf?” their anthem, but it proved to be another milestone of Disney animation in the scope of characterization, as well as in score and song. Walt Disney entrusted Frank Churchill with the score for the picture and Fred Moore with animating the pigs, and, justifiably proud, said, “At last we have achieved true personality in a whole picture.” The film became so popular that it often ranked higher on the marquee than the accompanying feature, and often stayed long after feature films came and went. At one New York theater, the manager had beards put on the pigs’ faces that grew longer as the short’s run extended. One of the most famous cartoons of all time, it won the Academy Award for Best Cartoon. A major merchandising campaign led to many items featuring the Big Bad Wolf and the Three Little Pigs. The film is included in Milestones in Animation (1973). The names of the pigs were Fiddler Pig, Fifer Pig, and Practical Pig. The writing of the song was re-enacted in the television show, Cavalcade of Songs (1955). The popularity of the film led to three sequels: The Big Bad Wolf, Three Little Wolves, and The Practical Pig.