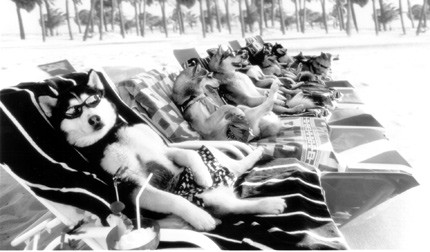 Snow Dogs (film) When Miami dentist Ted Brooks finds out that he has been named in a will, he travels to Tolketna, Alaska, to claim his inheritance. However, he discovers that he has been left a mischievous team of sled dogs, who have got it in for him. A crusty mountain man, Thunder Jack, also has it in for the city slicker. Wanting to claim the dogs for himself, he urges Ted to return to warmer climates. Released on January 18, 2002. Directed by Brian Levant. Stars Cuba Gooding, Jr. (Ted Brooks), James Coburn (Thunder Jack), Sisqo (Dr. Rupert Brooks), Nichelle Nichols (Amelia), Graham Greene (Peter Yellowbear), Brian Doyle-Murray (Ernie), Joanna Bacalso (Barb), M. Emmet Walsh (George). 99 min. For the filming, the town of Canmore, Alberta, doubled for the fictitious town of Tolketna. Released on video in 2002.