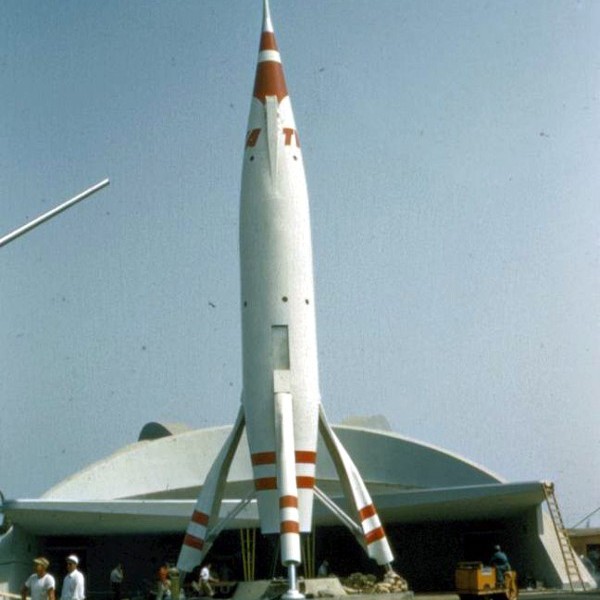 Rocket to the Moon Tomorrowland attraction at Disneyland, from July 22, 1955, to September 5, 1966. Sponsored by TWA from 1955 to 1961 and McDonnell Douglas from June 8, 1962, to 1966. Later became Flight to the Moon (1967-1975) and Mission to Mars (1975-1992). Space flight was still years away when Disneyland opened in 1955, so the Rocket to the Moon experience was a big thrill to park guests. They would sit in a pseudo rocket and live through a simulated trip to observe the far side of the moon. Projections above and below enabled guests to see where they were going and where they had been. It was always impressive to see Disneyland and then the earth getting smaller and smaller as the rocket left for the moon. After American astronauts actually set foot on the moon, the Disneyland attraction became outdated, and by 1975 it was changed to be a trip to Mars instead. The icon for the attraction was a huge standing rocket, at first labeled TWA and later Douglas. The rocket was destroyed when Tomorrowland was totally remodeled in 1966.